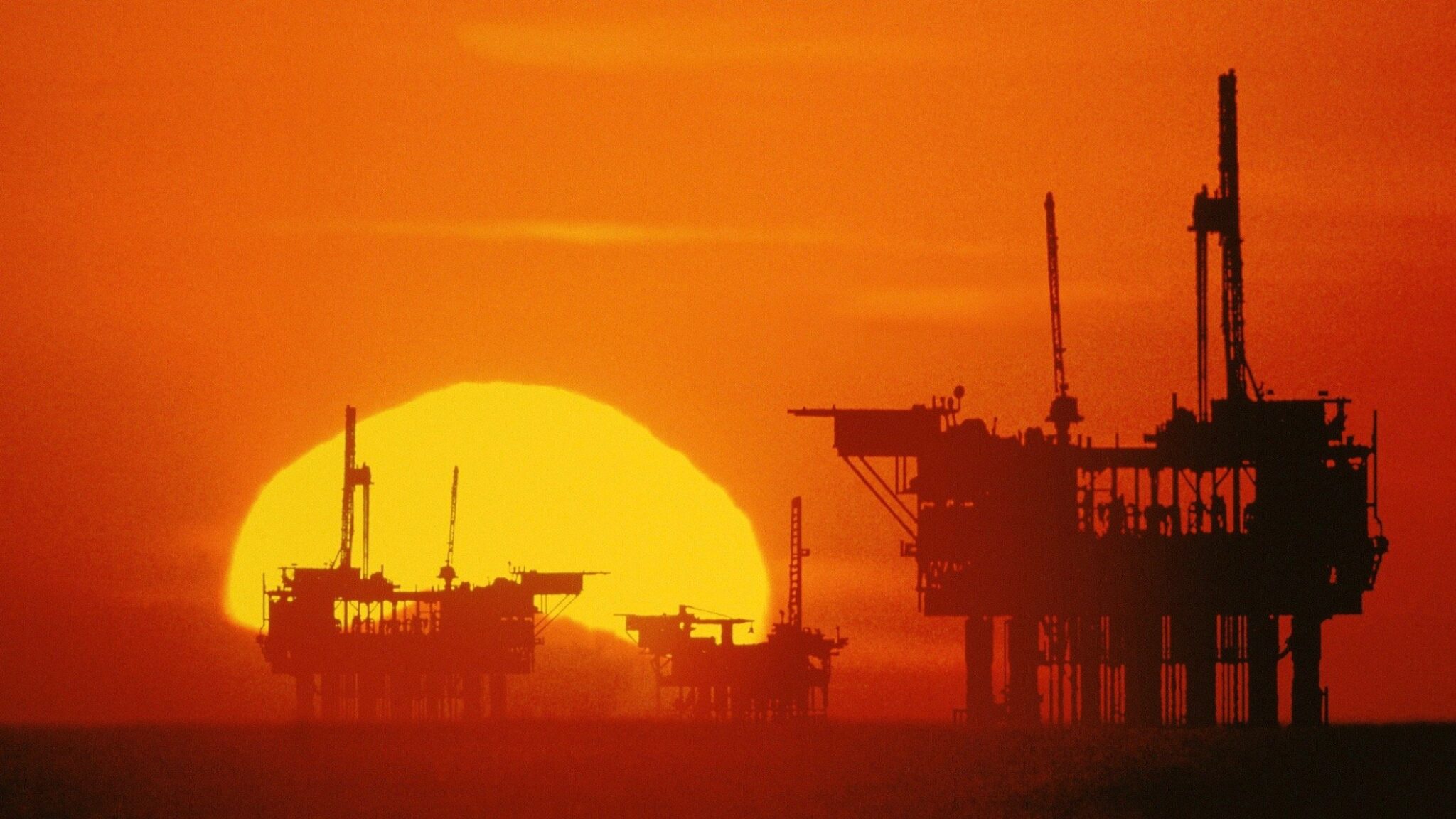 Deadly “day-night hot extremes” are increasing across the northern hemisphere due to climate change, a new study finds.

And the number of people exposed to such events, also known as “compound hot extremes,” is likely to increase “several-fold” as temperatures continue to climb in the coming decades, the study authors tell Carbon Brief.

If global temperatures reach 2 C — the upper limit set by countries in the Paris agreement — the frequency of compound hot extremes could more than double across the northern hemisphere, when compared to 2012, the research finds.

However, if greenhouse gas emissions are not curbed, compound hot extremes could become eight times more frequent by the end of the century.

The study sets out “clear evidence” that human-caused climate change is leaving its mark on extreme heat events, another scientist tells Carbon Brief.

Simply put, compound hot extremes deprive humans of the valuable chance of relief, which could have been provided by the ‘cooling-off’ effects of a nighttime low.

Such conditions occurred during the 2003 summer heatwave in Europe, which saw 70,000 deaths across 16 countries, the authors say. Another example is the 1995 Chicago heatwave, which led to more than 700 heat-related deaths in just five days.

The study is the first to present “a complete storyline on compound hot extremes” — investigating how they have changed, the role of climate change in this and how they might increase in the future, the authors say.

The results show that compound hot extremes “are significantly increasing and will continue to increase in frequency and intensity” across the northern hemisphere, say Chen and Wang:

These increases in heat hazards will translate into several-fold increases in population exposure to them. The rise of anthropogenic emission of greenhouse gas emissions is to blame for these increases.

For the first part of their study, the authors analysed the “fingerprint” of human-caused climate change on compound hot extremes to date. To do this, they conducted an “attribution” analysis.

The researchers then compared the frequency and intensity of compound hot extremes in both of these scenarios.

They found that only the scenario including human-caused greenhouse gas emissions could closely reproduce the pattern of compound hot extremes observed from 1960 to 2012. In their research paper, the authors write:

We find that the summer-mean warming over 1960-2012 largely dictates the past increases in frequency and intensity of compound hot extremes during that period in both observations and simulations.

The maps below show observed changes in summertime compound hot extreme frequency (left) and intensity (right) across the northern hemisphere from 1960-2012. 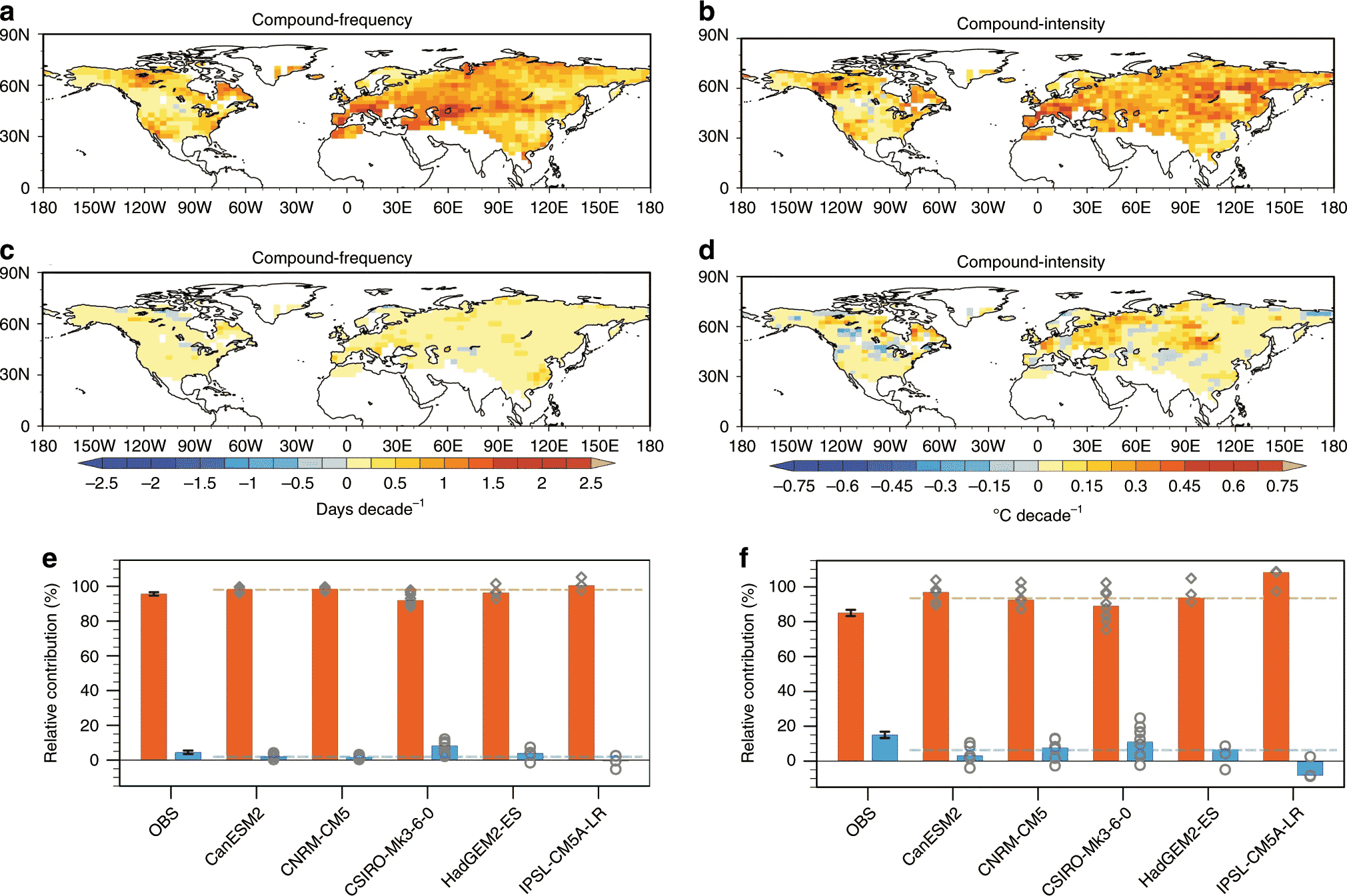 The map shows that increases in the frequency and intensity of compound hot extremes are widespread across the northern hemisphere, with parts of continental Europe and China particularly affected.

(Gaps in the data prevented the researchers from analysing changes in the most southern parts of the northern hemisphere, the authors say in their research paper.)

While the global pattern of increases is best explained by human-caused global warming, it is possible that some regional differences may be explained by other factors, the authors say.

For example, the drying of soils could help to explain local variation of heat extremes, the authors say in their research paper.

This is because dry soils accumulate heat during the day and release it at night, Wang and Chen say, making night hot extremes and, therefore, compound hot extremes, more likely.

Within each emissions scenario, they also looked at the changes to compound hot extremes expected if the world reaches 1.5 C and 2 C of global warming, which are the temperature limits set by the Paris agreement.

On the charts, red circles point out when the temperature limits of 1.5 C and 2 C will be breached in each scenario. The bottom chart also highlights when 4C could be breached. The various data points represent results from different climate models.

(It is worth noting that events are considered to be compound or independent. So, a 24-hour period where a hot day is followed by a hot night would be considered a compound extreme, but not an independent hot day or hot night.) 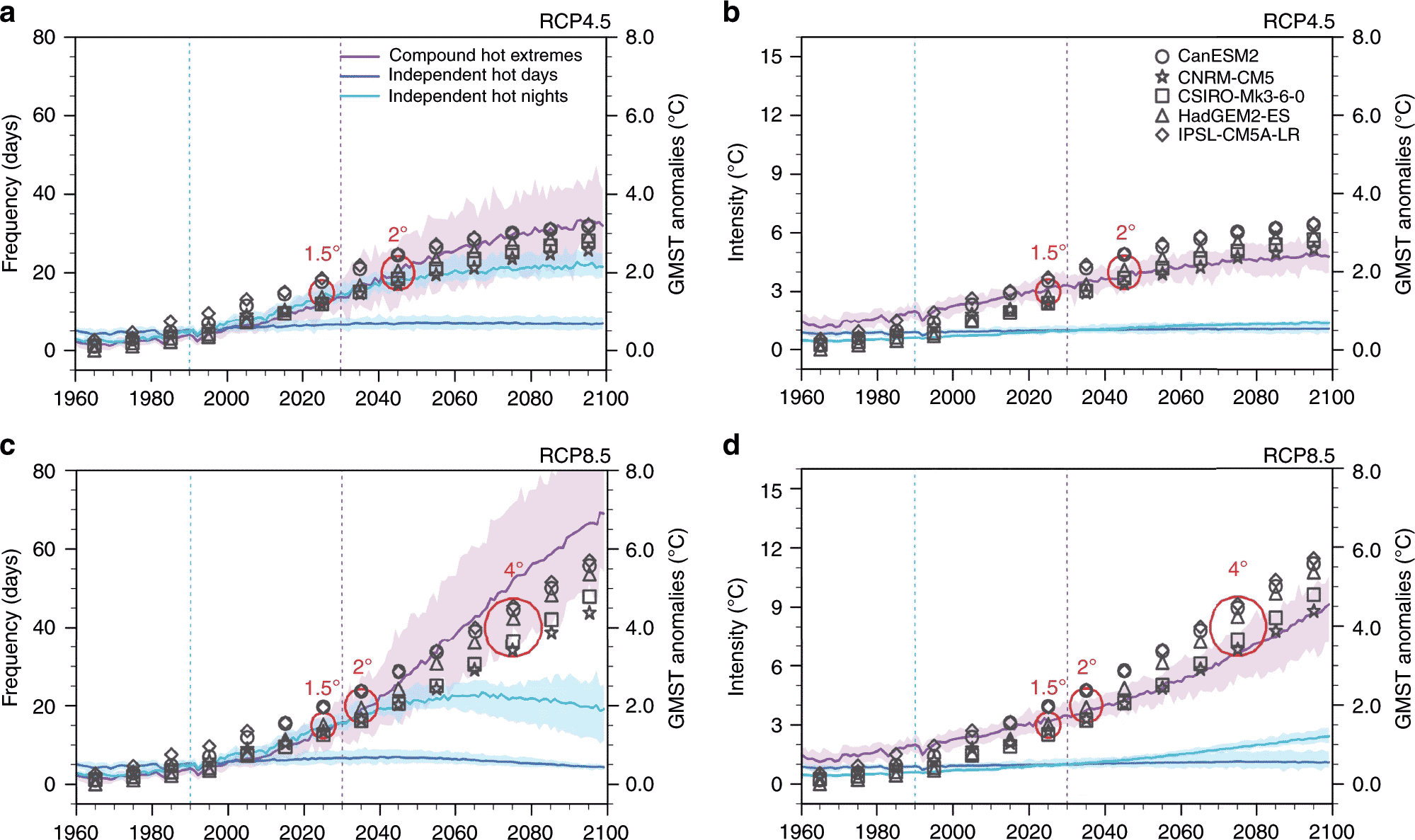 The results show that the average number of compound hot extreme days across the northern hemisphere in summer would more than double if temperatures reach 2 C, when compared to 2012.

Keeping temperatures at 1.5 C could see five fewer compound hot extreme days across the northern hemisphere, on average, when compared to 2 C, the research adds.

If greenhouse gas emissions are extremely high (RCP8.5), the number of summertime compound hot extremes could increase eight-fold by 2100, when compared to 2012, the results show.

The charts also show that compound hot events are expected to increase at a much more rapid rate than independent hot day or hot night events.

The findings reinforce “the urgency in reducing emission of greenhouse gases” for policymakers, say Chen and Wang:

We should keep the point in mind that as the globe warms, future summers are increasingly dominated by compound hot extremes and become more uncomfortable. Namely, a hot day accompanied by a hot night without a relief window for humans might become a ‘new norm’. As a result, vigilance against excess heat should be kept through day and night.

The study is “impressively comprehensive,” says Dr Eunice Lo, a research associate in climate extremes from the University of Bristol, who was not involved in the research. She tells Carbon Brief:

I think the main take home message from this study is that we should use consecutive day-night hot extremes as a major heat-health indicator for policymaking, as compound hot extremes are projected to have larger future increases in frequency and intensity then hot days or nights.

The findings produce “clear evidence” that human-caused climate change is leaving its mark on extreme heat events, says Prof Peter Stott, who leads on climate monitoring and attribution at the Met Office Hadley Centre. Stott, who was also not involved in the research, tells Carbon Brief:

I don’t find the conclusions of the study very surprising, but I do like the way the authors have comprehensively set out the implications – the clear evidence that the changes to date are driven by human emissions and the clear evidence that future changes will result in significant increases in the frequency and intensity of these compound extremes worldwide.