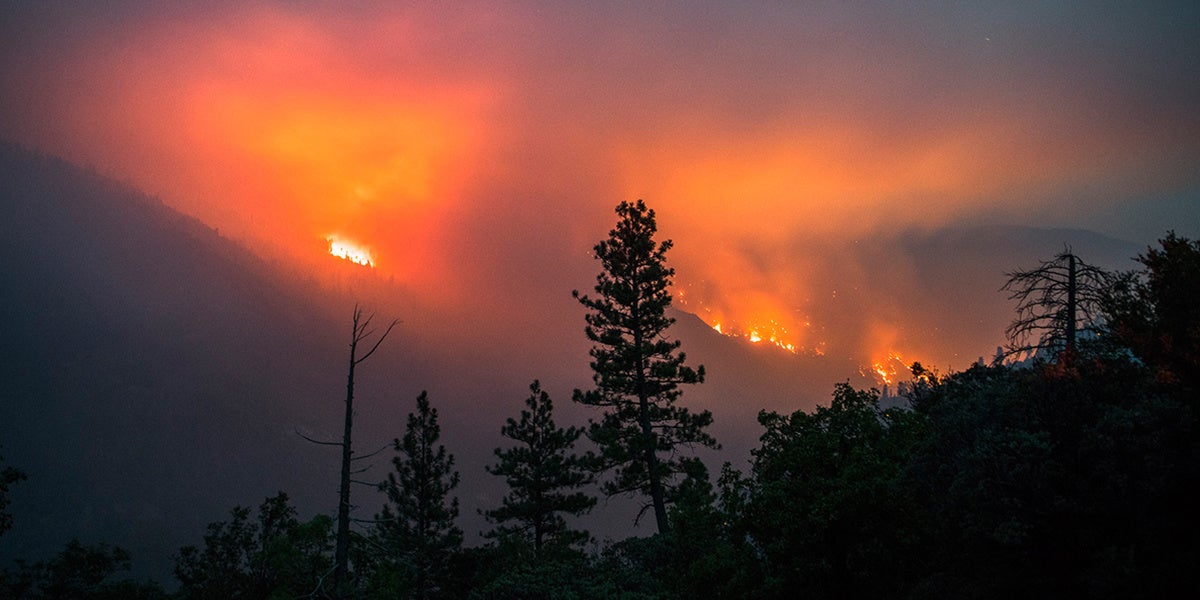 The Ferguson Fire burns in the Sierra National Forest and Yosemite National Park on Aug. 10. Pacific Southwest Region 5 / CC BY 2.0

The disconnect could not be greater. As wildfires raged across the U.S. last week, inflamed by climate change, Trump officials attended the America First Energy Conference, where delegates heard age-old fossil fuel arguments that, amongst others, carbon dioxide makes the planet greener and could not be creating a climate crisis.

The conference comes after an unprecedented heat wave in the Northern hemisphere. Scientists are warning that this summer’s heatwave is caused by climate change, which in turn has caused unprecedented temperatures and wildfires in Canada, Greece, Sweden and the U.S. Indeed this summer’s heatwave was made more than twice as likely by climate change, according to a rapid assessment by scientists.

Some scientists are even warning that we are descending into “hothouse earth,” where a series of positive feedback mechanisms could trigger even more extreme warming.

These high temperatures continue to cause massive wildfires with more than 100 major active blazes in the U.S. right now. Some 30,000 personnel are battling wildfires that have devastated more than 1.6 million acres (648,000 hectares) of land.

Meanwhile, the climate dinosaurs continue as if nothing is happening. They deny the science and evidence as the flames get ever closer.

The conference was organized by the leading climate denial think tank, Heartland Institute, which has been regurgitating the same climate denial old rubbish—what we now would now call “fake news”—for the last two decades. It has received significant funding from Exxon and the Koch brothers to do so.

But all their climate denial friends were there too, according to Reuters, including speakers from JunkScience, the Committee for a Constructive Tomorrow, and the Center for Industrial Progress and officials from the U.S. Department of Interior and the White House.

The panels included sessions on “Carbon Taxes, Cap & Trade, and Other Bad Ideas,” “Fiduciary Malpractice: The Sustainable Investment Movement,” and “Why CO2 Emissions Are Not Creating a Climate Crisis.”

Another one of the ludicrous conspiracy theories peddled at the conference was “that the United Nations puts out fake science about climate change to control the global energy market.” Oh and they hate renewable energy too, calling wind and solar energy “dumb.”

According to Reuters, the U.S. officials who attended included White House special assistant Brooke Rollins, Interior Department Assistant Secretary Joe Balash, and Jason Funes, an assistant in the office of external affairs at Interior. All “praised the administration’s moves to clear the way for oil industry activity.”

Tim Huelskamp, president and CEO of the Heartland Institute, closed the seminar by stating the person who had made the difference to the climate deniers was Donald Trump. “We have a president who has kept his promises,” he said. “It proves that one man can make a difference.” He called Trump “our last political chance at freedom.”

And in many ways he is right. Trump represents the last chance for the fossil fuel industry to wreck this planet. What they call freedom, we call wildfires. When they see freedom, we see sea level rise.

Ironically, the conference was held in New Orleans, which was once ravaged by Hurricane Katrina. As Reuters—not normally seen as left-wing conspiracy theorists—noted: “Evidence of sea level rise, however, is strewn across the state that hosted the conference.”

The panel speakers are so blinkered in their climate denial they do not notice what is happening right now. They may look, but they cannot see. On the speaker’s lectern was the strapline “freedom rising.” Maybe someone should have just written “sea level rising” instead.