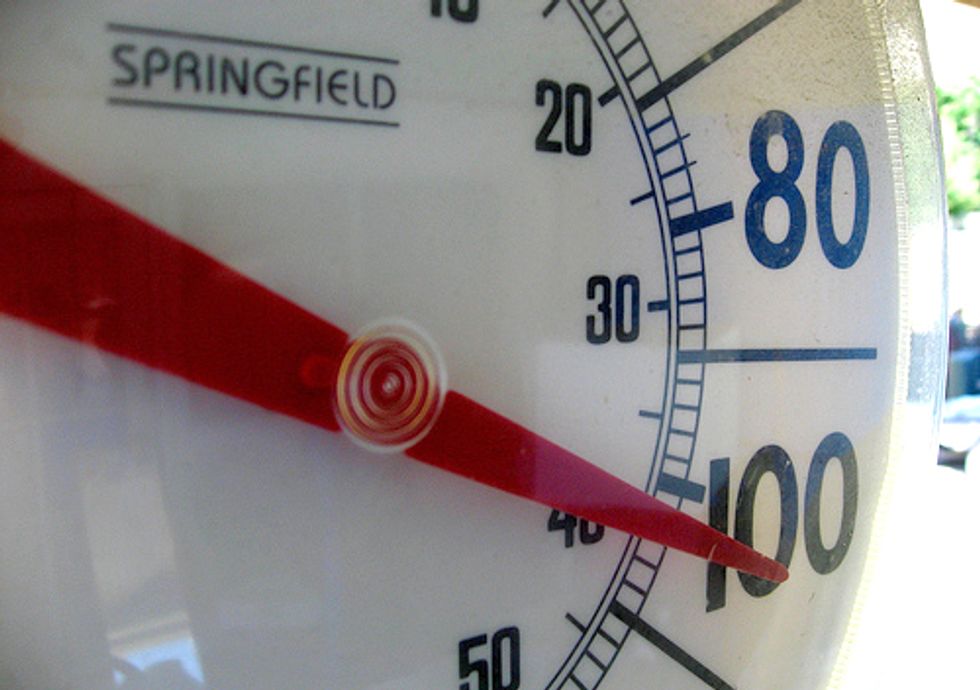 Sanders, in a  speech prepared for delivery to the Senate today, rebutted what he called "myths" espoused by Sen. James Inhofe (R-OK), the ranking Republican on the Senate Environment and Public Works Committee. "Many who take climate science seriously dismiss Sen. Inhofe. I believe that is a huge mistake," Sanders said of the Senate panel's former chairman. "For better or worse, when Sen. Inhofe speaks, the Republican Party follows. And when the Republican Party follows, it is impossible to get real work done in the Congress."

Inhofe's No. 1 myth, according to Sanders, is that "real scientists" say global warming is a hoax. In fact, the scientific consensus is nearly unanimous. "Global warming is unequivocal and primarily human-induced," according to the U.S. Global Change Research Program, which is made up of scientists at NASA, the U.S. Environmental Protection Agency and the departments of defense, agriculture, energy, state, health, transportation, commerce and interior.

The U.S. National Academy of Sciences and academies in Brazil, Canada, China, France, Germany, India, Italy, Japan, Mexico, Russia, South Africa and the United Kingdom all say "the need for urgent action to address climate change is now indisputable." Moreover, 18 scientific professional societies including the American Geophysical Union, the American Chemical Society and others say "climate change is occurring, and rigorous scientific research demonstrates that the greenhouse gases emitted by human activities are the primary driver."

"The bottom line,' Sanders said, "is that when Senator Inhofe says global warming is a hoax, he is just dead wrong according to the vast majority of climate scientists."

Another Inhofe myth is that the planet is cooling. Studies by NASA, based on records dating back a century, found that nine of the 10 warmest years on record occurred since 2000. Numerous other studies back up that conclusion.

Sanders said strong action to cut emissions would generate substantial energy savings, create good-paying jobs and help the economy grow. The cost of doing nothing, Sanders added, is already mounting. According to the insurance industry, property damage from extreme weather increased in the U.S. from $3 billion a year in the 1980's to $20 billion a year today.

"Unlike Sen. Inhofe, most Americans are seeing the evidence of global warming with their own eyes," Sanders said. So far this year, 2.1 million acres in the western U.S. have burned in wildfires, two-thirds of the country is experiencing drought, extreme summer storms have flooded parts of the Midwest and Atlantic seaboard and the last 12 months were the warmest 12-month period on record in the U.S.. Since last Jan. 1, cities and regions in the U.S. have set 40,000 records for high temperatures, according to the National Oceanic and Atmospheric Administration.

"The bad news is if we do nothing, the science is clear that temperatures will continue to increase, sea levels will continue to rise and extreme weather will become more frequent and devastating," Sanders said. "The good news is we have the technology to cut emissions today through efficiency and solar, wind, geothermal and biomass.

"It is time for Congress to get serious about global warming, and to work to transform our energy system. That starts by making sure that in this, the so-called greatest deliberative body, we deliberate with facts not myths," Sanders concluded.