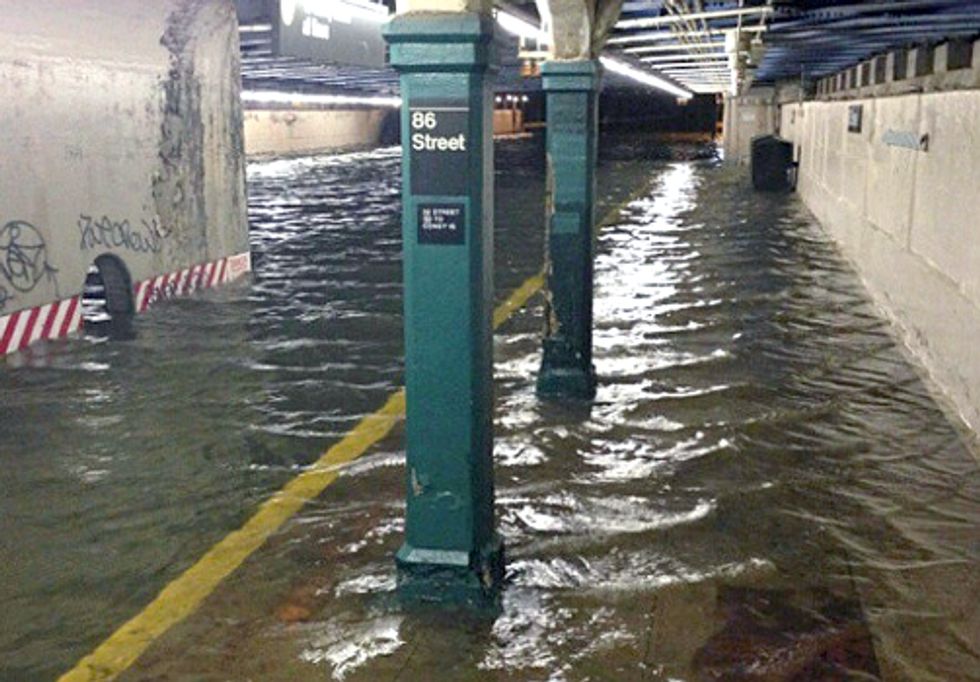 It does seem that, dripping wet and stinking of sewage, climate change is crawling out of New York’s subway tunnels and into the political light of day.

Consider me lucky. Yes, Sandy made a modest mess of my life. I had to cancel a trip to Chicago (or swim down the LaGuardia Airport runway to get there). The wind roared past our window like a speeding truck. The Hudson River was a white-capped torrent. Trees in our neighborhood came down. A piece of construction scaffolding on a building across the street fell. It was unnerving, but living on a (relatively) higher part of Manhattan Island I never lost electricity or the Internet.

I didn’t find myself, like a friend in Jersey, living on the 21st floor of a high-rise with no electricity, no water, essentially nothing. Unlike a friend of my daughter’s I wasn’t flooded out of a first-floor apartment in the low-lying neighborhood of Red Hook in Brooklyn, and didn’t lose my furniture to two feet of water. I didn’t end up with a basement full of sewage and fuel oil, or find myself for a week in lower Manhattan where the lights were out (“little North Korea,” Jon Stewart called it), the food rotting in refrigerators and you could hardly get cell phone reception. I didn’t spend hours in endless car lines waiting for gas. I wasn’t in a hospital that lost power. I didn’t, like 110 people in the region, die.

So, yes, I was lucky. But my city took one hell of a hit. Honestly, when it’s the Midwest and a drought that won’t end, I may know what’s at stake, I may truly care, but it’s still happening elsewhere. When it’s the place where you were born, where you grew up, which you fled and returned to, the place that’s built into you, then it’s terrifying.

I was also quite safe and distant when terror struck far downtown on Sept. 11, 2001. Last Monday, terror struck again. I know it looked like “nature,” not some al-Qaeda wannabe, and I’m quite aware that no specific, in-your-face weather event can definitively be linked to climate change, but let’s face it, ever fewer people doubt that we are warming the planet, with disastrous weather results. And at the top of the list of those who know what's going on are the fossil-fuel companies with their unprecedented profits and unbearably overpaid executives and shareholders.

Just like those running asbestos, lead paint and tobacco companies who knowingly continued to do harm for profit after the scientific verdicts on their products were in, energy executives undoubtedly are more aware of what the burning of fossil fuels actually means for this planet than most of the rest of us. They certainly don’t know less than the reinsurance types who have launched a campaign of climate change awareness within the insurance business or New York’s Mayor Bloomberg, whose magazine Bloomberg Businessweek just had the blunt cover headline, “It’s Global Warming, Stupid.”

And if they know and haven’t taken steps to prepare us for a fierce weather future or to switch us over to an alternative energy economy, if they’ve just kept on pouring money and effort and ingenuity into the frizzling of this planet, then let’s face it, they are the business equivalents of terrorists. In fact, for years they’ve funded a massive campaign to deny the reality of climate change.  Only recently, Chevron made a last minute contribution of $2.5 million to a Super PAC dedicated to reelecting Republican members of the House of Representatives (who could, of course, block any legislation detrimental to an oil company). Realistically speaking, we should think of them as oil-Qaeda and we already know one thing: the strikes against us that they are at least partially responsible for are only going to grow more devastating.

Eleven years ago, three days after a terrible assault on New York City, a U.S. president arrived in downtown Manhattan, clambered onto a pile of rubble at Ground Zero, grabbed a bullhorn, and swore: “The people who knocked these buildings down will hear all of us soon!” Then, after those who called for police action against al-Qaeda to bring them to court for their crimes were laughed out of the room, he launched a Global War on Terror. And you know where that ended up.

Today, people aren’t wearing I [Heart] New York T-shirts nationwide, and no one, president or otherwise, is calling for a “war” on oil-Qaeda. Personally, I’m still for the police-and-courts route, but the best we can hope for right now is simply that, after a political season of too-hot-to-handle silence on climate change, the people who had a hand in doing this to us “will hear all of us soon!” It does seem that, dripping wet and stinking of sewage, climate change is crawling out of New York’s subway tunnels and into the political light of day.