“We have a narrow window of time to avoid very costly, deadly and irreversible climate impacts." 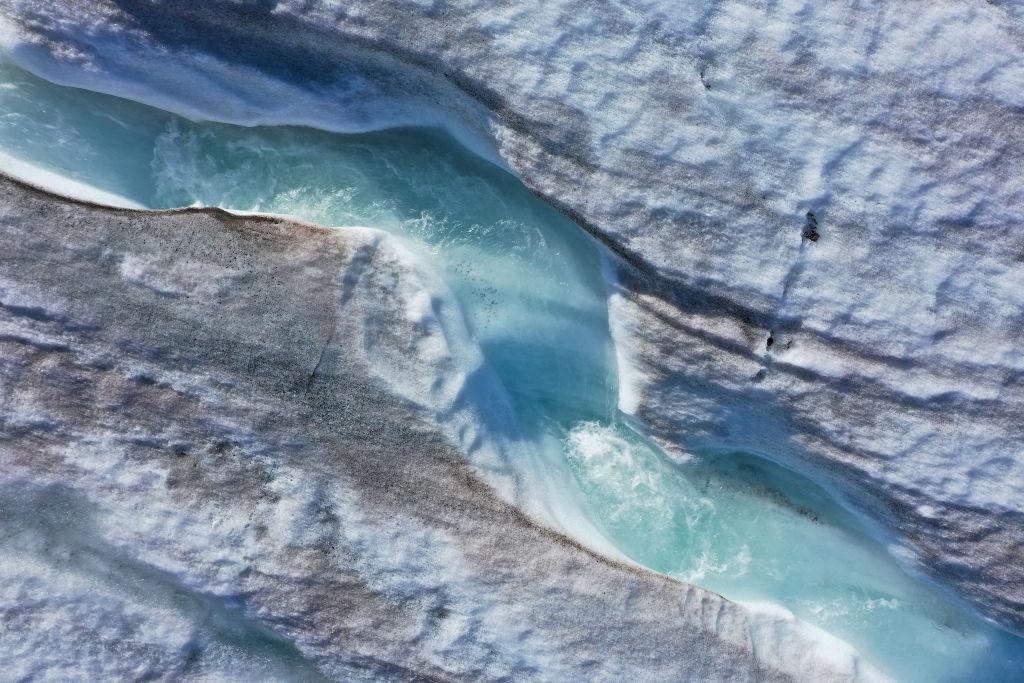 In this aerial view from a drone water carves a winding channel down the surface of the melting Longyearbreen glacier during a summer heat wave on Svalbard archipelago on July 31, 2020 near Longyearbyen, Norway. Sean Gallup / Getty Images

Temperatures have been rising in the Arctic and Antarctic twice as fast as the rest of the globe, and it is changing the dynamics of the region. Beavers, whose damming activity increases the melting of permafrost, have been seen making the Arctic their new home, the ice shelf holding the enormous Thwaites Glacier in place is eroding and beginning to crack, and the region is becoming more accessible, leading to human disruptions of wildlife and the waste that follows.

“The very character of these places is changing,” said glaciologist at the National Snow and Ice Data Center and co-editor of the Arctic Report Card Twila Moon, The Washington Post reported. “We are seeing conditions unlike those ever seen before.”

The effects of speedy warming in the coldest places on Earth will not only greatly impact the Arctic itself, but will reverberate across the globe. As the Arctic and Antarctic warm, weather patterns will change as the sea levels rise and entire ecosystems will be thrown off-balance.

“The Arctic is a way to look into the future,” said Matthew Druckenmiller, a co-editor of the Arctic Report Card and a research scientist at the National Snow and Ice Data Center, as reported by The Washington Post. “Small changes in temperature can have huge effects in a region that is dominated by ice.”

“According to an ongoing temperature analysis conducted by scientists at NASA’s Goddard Institute for Space Studies (GISS), the average global temperature on Earth has increased by a little more than 1° Celsius (2° Fahrenheit) since 1880. Two-thirds of the warming has occurred since 1975” reported NASA’s Earth Observatory.

Sea ice has been melting at a rapid rate, which puts the Arctic ecosystem at risk. “These warm conditions are catastrophic for the sea ice that usually spans across the North Pole. This past summer saw the second-lowest extent of thick, old sea ice since tracking began in 1985,” reported Sarah Kaplan of The Washington Post. “Large mammals like polar bears go hungry without this crucial platform from which to hunt. Marine life ranging from tiny plankton to giant whales are at risk.”

Arctic sea ice can be seen as a giant “air conditioner” for the rest of the world, according to Kaplan. “[I]t reflects as much as two thirds of the light that hits it, sending huge amounts of solar radiation back into space,” she reported.

Melting glaciers means more water filling rivers and increasing floodwaters. When ice melts it can cause cliff collapse, resulting in tsunamis. Thawing permafrost can lead to crumbling roads, pipes bursting and collapsing buildings. According to Kaplan, “Some 5 million people living in the Arctic’s permafrost regions are at risk from the changes happening at their shores and under their feet.”

“It’s not just about polar bears, it’s about actual humans,” said climate change specialist at the University of Alaska Fairbanks Rick Thoman, a co-editor of the Arctic Report Card, as reported by The Washington Post. “These changes are impacting people and their lives and livelihoods from ‘What’s for dinner tonight?’ up to the international scale.”

Of course the changing conditions in the Arctic can lead to an increase in wildfires. “Drier and hotter regional conditions under a changing climate have increased the risk of flammability and fire risk of vegetation, scientist at the European Centre for Medium-Range Weather Forecasts Mark Parrington said to the Guardian, as reported by Grist.

Measures can still be taken to mitigate some of the worst effects of climate change and, as Kaplan reported, “achieving the best case climate scenarios could cut the volume of ice lost from Greenland by 75 percent, research suggests.”

“We have a narrow window of time to avoid very costly, deadly and irreversible climate impacts,” said Administrator of the National Oceanic and Atmospheric Administration Rick Spinrad, as The Washington Post reported.

“It all depends on human actions,” said Moon.