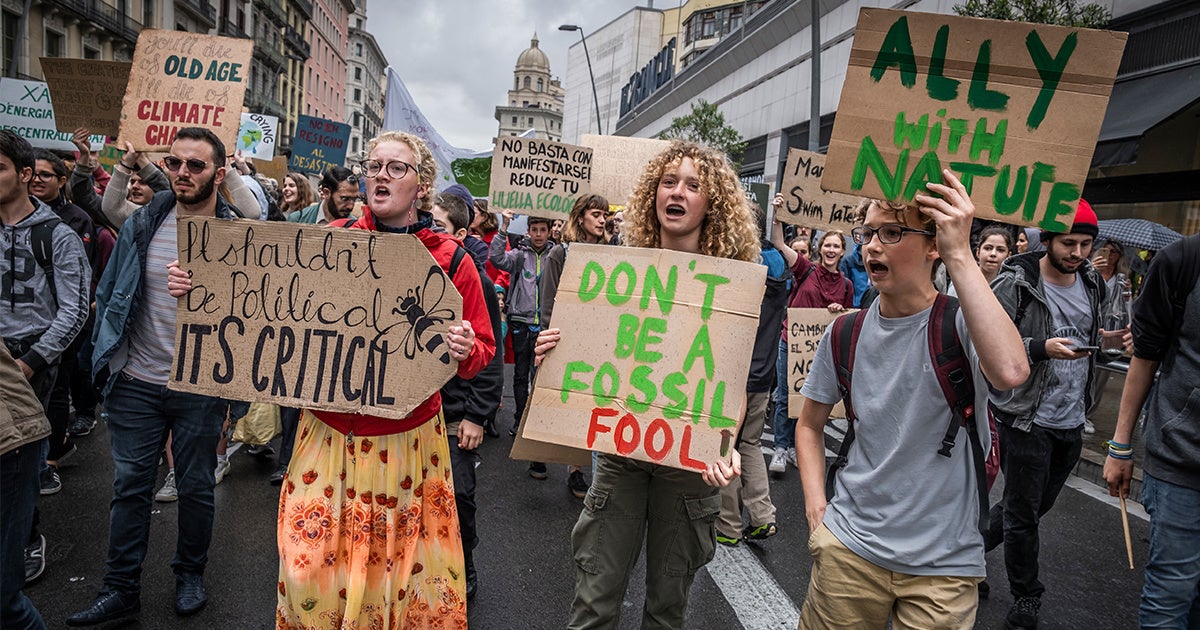 Hundreds of climate activists attended a Fridays for Future demonstration in Barcelona, Spain on May 24. Paco Freire / SOPA Images / LightRocket via Getty Images

Climate campaigners were undaunted when the secretary general of the Organization of the Petroleum Exporting Countries (OPEC) called their movement “perhaps the greatest threat” to the oil industry.

“There is a growing mass mobilisation of world opinion… against oil" and this is "perhaps the greatest threat to our industry".
OPEC calls the school strike movement and climate campaigners their “greatest threat”.

Thank you! Our biggest compliment yet!https://t.co/f3anMLo4XX

Thunberg has been credited with launching the “Fridays for Future” youth movement when her one-person school strikes outside Swedish parliament inspired children and teens around the world to skip classes to call for action on the climate crisis. Thunberg and the movement won Amnesty International‘s Ambassador of Conscience Award this June.

In remarks made in Vienna earlier this month, OPEC Secretary General Mohammed Barkindo seemed to single out the youth-led climate strikes when he said that the children of some of his OPEC-headquarter colleagues “are asking us about their future because … they see their peers on the streets campaigning against this industry,” AFP reported.

Barkindo said that “unscientific” attacks on the oil industry by climate activists were “perhaps the greatest threat to our industry going forward.”

“Civil society is being misled to believe oil is the cause of climate change,” he said.

However, at least 97 percent of scientists agree that global warming is occurring, and is caused by greenhouse gas emissions from human activities like the burning of fossil fuels, including oil. A 2018 report from the Intergovernmental Panel on Climate Change said those emissions needed to fall by nearly half in 11 years in order to limit global warming to 1.5 degrees Celsius above pre-industrial levels and avoid the most catastrophic consequences of climate change.

Thunberg wasn’t the only climate activist to welcome Barkindo’s comments as a sign their efforts were paying off.

“Brilliant! Proof that we are having an impact and be sure that we will not stop,” UK climate strike leader Holly Gillibrand tweeted, as The Guardian reported.

Brilliant! Proof that we are having an impact and be sure that we will not stop. We will continue to be their "greatest threat" until the fossil fuels are kept in the ground. https://t.co/edy9D2MeJ3

And it wasn’t just the youth who expressed excitement. 350.org founder Bill McKibben, who has been campaigning on climate issues for more than 30 years according to CNBC, also took to Twitter to celebrate.

“Thanks everyone for your good work!” he wrote.

Wow! Wow! Wow! OPEC Secretary General says climate campaigners are "the greatest threat to our industry…There is a growing mass mobilization of world opinion against oil." Thanks everyone for your good work!https://t.co/qMWCbTXgY6

In remarks reported by The Guardian, McKibben reflected further on the impact of the climate movement on the oil industry.

“By this point, most people realize that the oil companies lied for decades about global warming — they are this generation’s version of the tobacco companies,” he said. “And it’s clearly affecting their ability to raise capital, to recruit employees and so on. People set out to cost them their social license, and it’s working. Whether it’s working fast enough — that’s another question.”

In one example of how big oil is losing its “social license,” the London Stock Exchange recently reclassified oil and gas companies under a non-renewable energy category to distinguish them from renewable energy companies, The Guardian reported July 3.