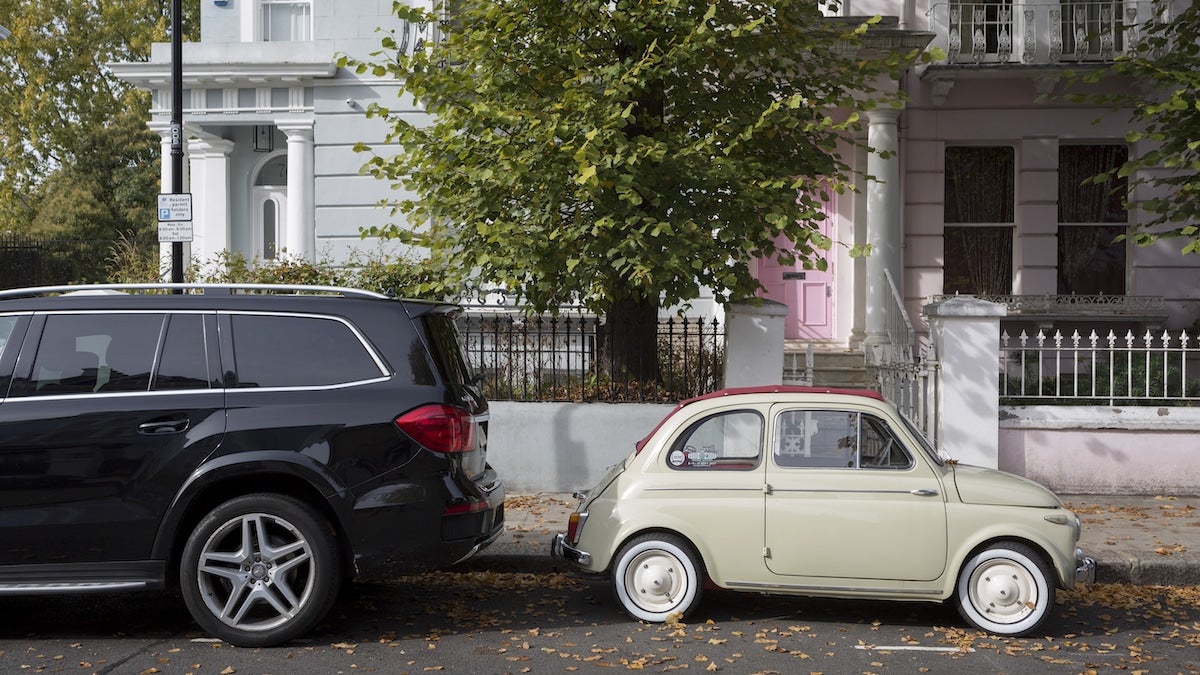 A large SUV parked next to a small Fiat in Notting Hill, London, England. Richard Baker / In Pictures via Getty Images Images

An environmental activist group called the Tyre Extinguishers has deflated hundreds of SUV tires in Britain in order to send the message that the luxury, off-road vehicles are not welcome in urban areas.

The group said it is the first in what is to be a series of protests.

Thus far, Tyre Extinguishers has “disarmed” SUVs in wealthy areas of London such as Chelsea, Notting Hill, Belgravia and Hampstead Heath, as well as let the air out of tires in Bristol, Brighton, Cambridge, Liverpool, Sheffield and Edinburgh, according to a press release, as The Independent reported.

“The group is taking this action because SUVs are a climate disaster – if SUV drivers were a country, they would be the seventh-largest polluting country in the world,” the press release said, as reported by The Independent.

Tyre Extinguishers wants SUVs banned from urban areas and for them to be taxed out of existence through pollution levies, according to the press release, as BBC News reported. They also want to see greater investment in public transportation.

In 2019, a similar campaign in Sweden resulted in a significant decrease in SUV sales.

“Governments and politicians have failed to protect us from these massive unnecessary vehicles,” Marion Walker, spokesperson for the group, said, as reported by The Independent. “Everyone hates [SUVs], apart from the people who drive them. Politely asking for climate action, clean air, and safer streets has failed. It’s time for action.”

Tyre Extinguishers are a “leaderless” group, according to the press release, and when and where its actions happen are decided by its members, Walker told inews.co.uk.

Seventy-five percent of SUV owners live in urban areas, and the carbon emissions from the vehicles are about 14 percent higher than those of smaller cars.

When the group deflates the tires of a vehicle, it also puts a leaflet under the windshield wipers giving the reasons for its actions, such as SUVs being responsible for more carbon emissions in the past decade than the aviation industry.

The leaflets left on the vehicles are also “to inform the owner of what has happened, for their safety,” reported The Independent.

According to an International Energy Agency study, growing SUV sales were the second largest reason for an increase in carbon emissions, BBC News reported.

One upset Twitter user targeted in the action said, “You let down my tyres and I didn’t notice until I started driving with my three children in my car. My car is fully electric. We also had a child that required to be at the hospital for an appointment in the city. Thankfully we had a second car. Please think before you act,” reported The Independent.

Walker said the group will keep up its actions as long as SUV ownership in Britain continues.

“Members are free to repeat the action whenever works for them, so it could happen tonight, and the night after,” said Walker, as inews.co.uk reported. “We will repeat this until it is impossible to own an SUV in Britain.”

Switching From Gas to Induction Stoves Leads to Major Drop in Indoor Air Pollution in Bronx Pilot Program
In a pilot program in the Bronx, New York, a
By Paige Bennett
Exxon Wallows in Record-Breaking Profits in 2022
What could dwarf Chevron's biggest-ever profits of $35.5 billion in
By Climate Nexus
Study Using AI Warns We Are 10 to 15 Years From Breaching 1.5°C Paris Agreement Goal
A new study using artificial intelligence (AI) to forecast global
By Cristen Hemingway Jaynes