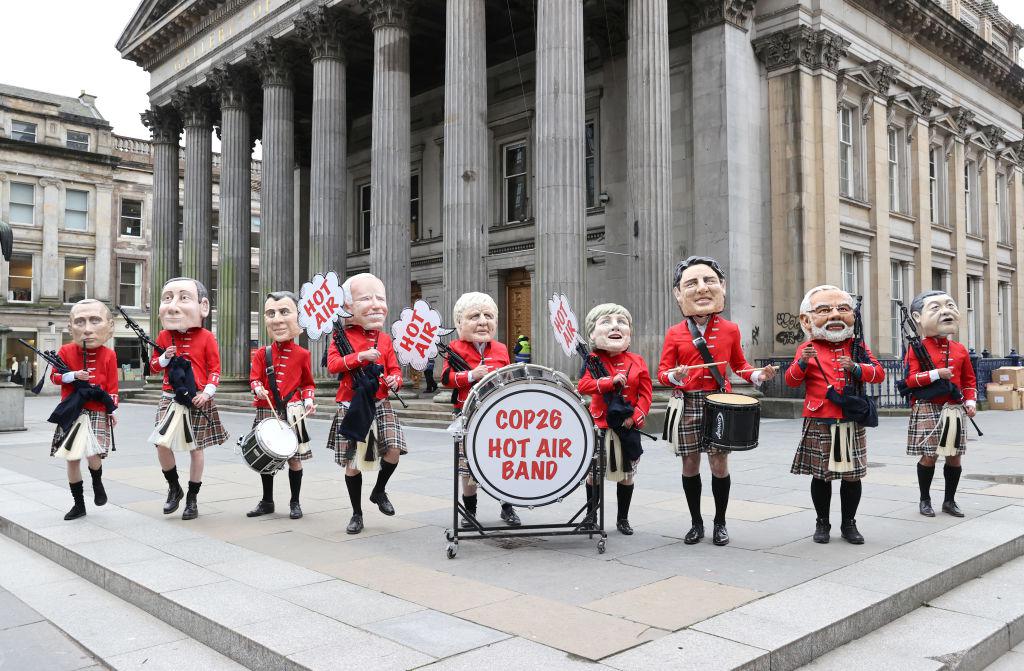 Chanting “shame on you,” activists rallied amid a heavy police presence Monday evening outside a swanky reception for world leaders and others attending the United Nations Climate Change Conference in Glasgow, Scotland to protest their inadequate response to the planetary emergency.

Members of Britain’s royal family and corporate executives joined heads of state and other leaders at the exclusive dinner event, which was hosted by British Prime Minister Boris Johnson at the Kelvingrove Art Gallery and Museum.

“How dare these world leaders have a fancy dinner on the first night of COP26, as if they have something to be proud of,” said Cat Scothorne of the group Glasgow Calls Out Polluters, according to STV News.

“The continued support of the fossil fuel industry by the heads of state, particularly in the Global North, is killing millions of people,” Scothorne added. “The consequences of climate change are faced by people not in power, but those mainly in the Global South and people on sites where extraction occurs, yet the perpetrators sit in luxury, insulated from it all.”

One protester told Capital Scotland News he was there “to raise awareness of the need for urgent action on the climate and ecological emergency, mostly because with our political processes, we’re left with almost no other routes to make a difference.”

“We’re going down an utterly absurd route of deciding as a species to kill ourselves,” he added. “We have to step up and say, ‘No, that’s completely absurd; let’s choose a route that saves ourselves.'”

Another demonstrator told the outlet she was protesting to hold decision-makers accountable.

“We’re working towards global justice, climate justice,” she said, “not just making decisions that only benefit a few people, but rather to make decisions that benefit everyone.”

The demonstration came at the end of the second day of the global summit and amid demands from Indigenous leaders, youth climate campaigners, and others for a little less conversation and a lot more action to address the growing climate crisis.