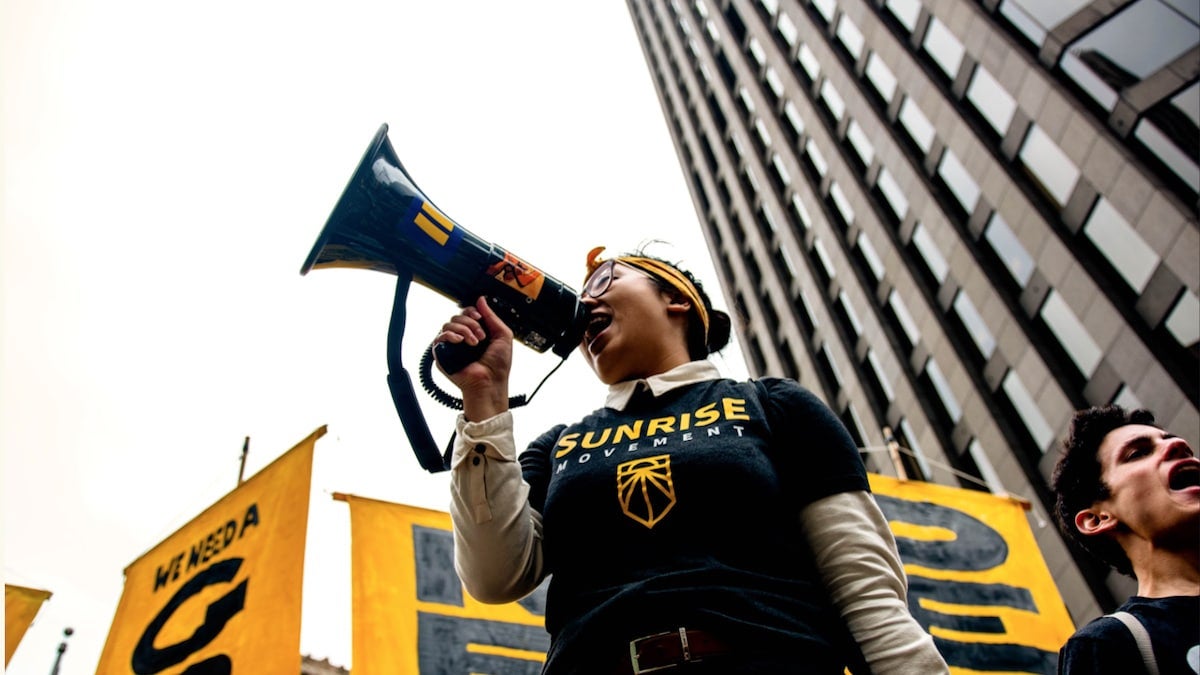 Weeks after the Sunrise Movement launched a swing state mobilization campaign with a plan to reach more than 1.5 million voters before Election Day, climate campaigners are showing no sign of slowing down their Get Out the Vote efforts — sending the message to young Americans that voting President Donald Trump out of office is the crucial first step in a greater effort to “build our political power in Washington.”

In a 12-minute ad released online Monday by the Sunrise Movement, former Bernie Sanders surrogate and climate activist Xiuhtexcatl Martinez begins by rejecting common tactics used for decades by political strategists and politicians to encourage young people to vote — from attempts to “make voting seem cool” through humor and celebrity endorsements, to efforts to shame them into going to the polls by accusing them of being “lazy and unengaged.”

“While youth turnout has always been low, the stereotype that young people don’t care about politics isn’t true,” says Martinez, one of 21 plaintiffs in Juliana vs. United States, in which teenagers and children sued the federal government for not protecting them from the climate crisis.

While young people are keenly aware of the issues facing their generation and are supportive of legislation to mitigate the planetary emergency, Martinez argues, their attempts to get involved in politics are often thwarted by a system rife with voter suppression and mass disenfranchisement.

“Regardless, if enough young people vote, the odds dramatically shift,” he adds.

Instead of imploring young voters to unquestioningly take part in a system in which those in power have frequently ignored their demands, Martinez and the Sunrise Movement frame the general election and the choice between President Donald Trump — who openly denies the existence of the climate crisis — and Democratic candidate Joe Biden as the “one-time choice that allows us to make more meaningful choices down the line.”

“Young people have the power to crush Trump, and he knows it,” the Sunrise Movement tweeted on Monday. “Once he’s out, and we’re still in the streets, our movement can set the tone for the next four years, just like movements past.”

Young people have the power to crush Trump, and he knows it. That’s why he’s trying to steal the election, but we’re going to be there to stop him.

Once he’s out, and we’re still in the streets, our movement can set the tone for the next four years, just like movements past. pic.twitter.com/HNuP4FEJ9I

Martinez notes that Biden, who has angered climate action advocates in recent weeks by insisting that he has no intention of banning fracking and failing to fully embrace the call for a Green New Deal, has nevertheless shown signs of understanding that young voters and their priorities, including the climate, are not to be dismissed. In the ad, Sunrise Movement co-founder Varshini Prakash explains how the task force set up by supporters of Biden and Sanders successfully pushed the Democratic candidate to adopt a more ambitious plan for decarbonization.

The ad compares Biden to former President Lyndon Johnson, who signed the Voting Rights Act and Civil Rights Act into law after decades of voting against civil rights in Congress.

“Relentless activist movement” was behind the legislation Johnson signed in the 1960s, Martinez says. Facing civil rights leaders including Martin Luther King, Jr. and John Lewis, he adds, “The narrative shifted and Johnson was forced to meet the moment. So while we do not approve of Biden’s record or even some aspects of his platform, we must elect him and work tirelessly towards hearing him sing the songs of our movement.”

“We have reached our most defining moment in electoral politics,” Martinez says. “Our ability to push forward the agendas of our generation will be determined not only by how we vote going into November but how we mobilize the morning after the election.”

The ad was released as 350.org launched its own GOTV effort in states including Colorado, California, Minnesota, and Washington. Thousands of staffers and volunteers with the organization’s local chapters are working to make 350,000 calls to voters before Election Day, as well as text banking and sending postcards.

“We’re ramping up our get out the vote efforts because we know that to effectively address the climate crisis, we need solutions across sectors that prioritize those most impacted — Black, Indigenous, communities of color, workers and low income communities,” said Dominique Thomas, New York and Mid-Atlantic organizer for 350.org. “Climate justice and action cannot exist in a silo — we need leaders who see the interconnectedness of lowering emissions and cutting pollution with housing rights, economic justice, racial justice, and healthcare. This November, we’re rising up to make sure our demands are heard.”

Members of 350 Colorado aim to reach 130,000 voters in their state, while in California, 350 Bay Area Action is working with five partner organizations to target voters in Iowa, Kansas, Montana, Alaska, Arizona, and Colorado. The group has so far conducted 37 virtual phone banks in which 800 volunteers made 50,000 calls.

“Our volunteers know that the stakes in this election could not be higher. Our country will go one way or another in November. It is essential that we secure leadership that will protect the environment and the climate. There is simply no more time,” said Marti Roach, lead organizer for the 350 Bay Area Action “Go Green, Vote Blue” phone bank campaign.

In the Sunrise ad, Martinez urged voters to “join our movement and get to work right away to send Trump and the Republicans a simple message: Get out of the way. We’ve got work to do.”