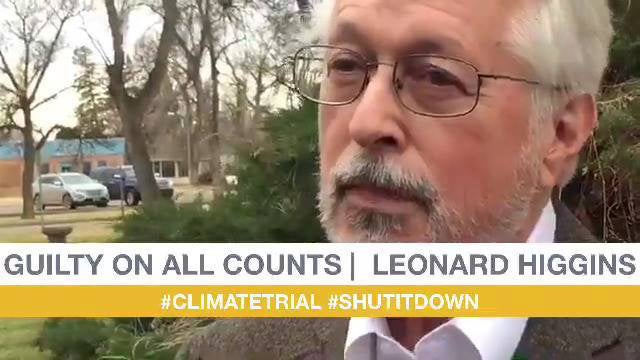 After a judge refused to allow him to share his reasons for shutting off a tar sands pipeline valve in a protest of fossil fuel mining, 65-year-old climate activist Leonard Higgins was found guilty of criminal mischief—a felony—and misdemeanor criminal trespass. Higgins faces up to 10 years in jail and as much as $50,000 in fines.

“I’m happy for the opportunity to share why I had to shut down this pipeline, and I really appreciate the time and dedication of the jury and the judge,” Higgins said. “I was disappointed and surprised by the verdict, but even more disappointed that I was not allowed a ‘necessity defense,’ and that I wasn’t allowed to talk about climate change as it related to my state of mind. When I tried to talk about why I did what I did I was silenced. I’m looking forward to an appeal.”

Supporters spoke out on social media after the verdict was handed down in a Montana court room, following a trial that lasted less than two days.

Leonard Higgins was found guilty today on both counts. Please send him some love and if you have it, a little cash to valve turner efforts. We have another trial coming up soon and may need jail support: https://t.co/TghQ7L6a77 pic.twitter.com/5QaJs7gVcB

Higgins, along with four other activists, shut off an emergency valve of the Enbridge tar sands pipeline in rural Montana on Oct. 11, 2016, in protest of the flow of the highly damaging carbon-carrying oil into the U.S.

The former government employee admitted to his actions and expressed gratitude for his day in court. Higgins was hoping to be able to offer a “necessity defense,” demonstrating that his protest was necessary to fight the destruction of climate change that’s accelerated by fossil fuel mining and transportation of tar sands—but he was not permitted to testify regarding climate change.

“We’re disappointed that Mr. Higgins was denied the opportunity to present a full defense and explain to the jury why he took his courageous action,” said Kelsey Skaggs, executive director of the Climate Defense Project and member of Leonard’s legal team, following the conviction. “Because of the fossil fuel industry’s enormous influence, activists fighting for the future are being convicted while the real climate criminals walk free.”

.@Leonard_Higgins faces 10 years in prison, while Enbridge is free to continue to cause spills and climate crisis. #ClimateTrial https://t.co/sUCq0M89Ai pic.twitter.com/OQlI6vv4HY