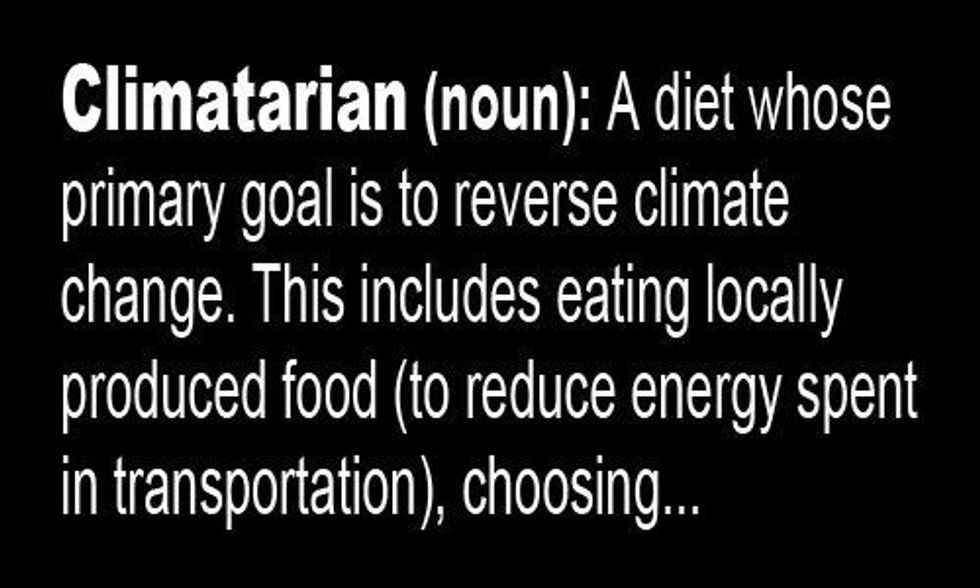 The New York Times published its list of the top new food words for 2015. Words and phrases that made this year's list range from "beer o'clock," one's personal assessment of the right time of day to start drinking, to "hangry," the state of being so hungry that you become angry or irritable.

But, the one word most relevant to the environmentally conscious is "climatarian." The New York Times defines it as "a diet whose primary goal is to reverse climate change. This includes eating locally produced food (to reduce energy spent in transportation), choosing pork and poultry instead of beef and lamb (to limit gas emissions) and using every part of ingredients (apple cores, cheese rinds, etc.) to limit food waste."

The word gained popularity this year in part because it was promoted by a group called Climates (yes, the organization's official name is formally half-bold). They encourage people to "go climatarian" and save a tonne (1.1 short tons) of carbon dioxide equivalent, which includes carbon dioxide, methane, nitrous oxide and other greenhouse gases.

The evidence supporting a climatarian diet is abundant. Several reports within the past year, including one from the UK think tank Chatham House, have found that eating less meat and dairy is essential to curbing climate change.

And a carbon-conscious diet is not only good for the planet, but is healthy for people, too.

Meat, especially processed meat, is looking less and less appetizing, especially since the release of the World Health Organization's report that found the consumption of processed meat is linked to an increase in cancer risk.

While #climatarian has gained some traction on Twitter, it remains to be seen if the word is here to stay.