Cleveland's Plan to Build a Garbage Incinerator Goes Up in Smoke 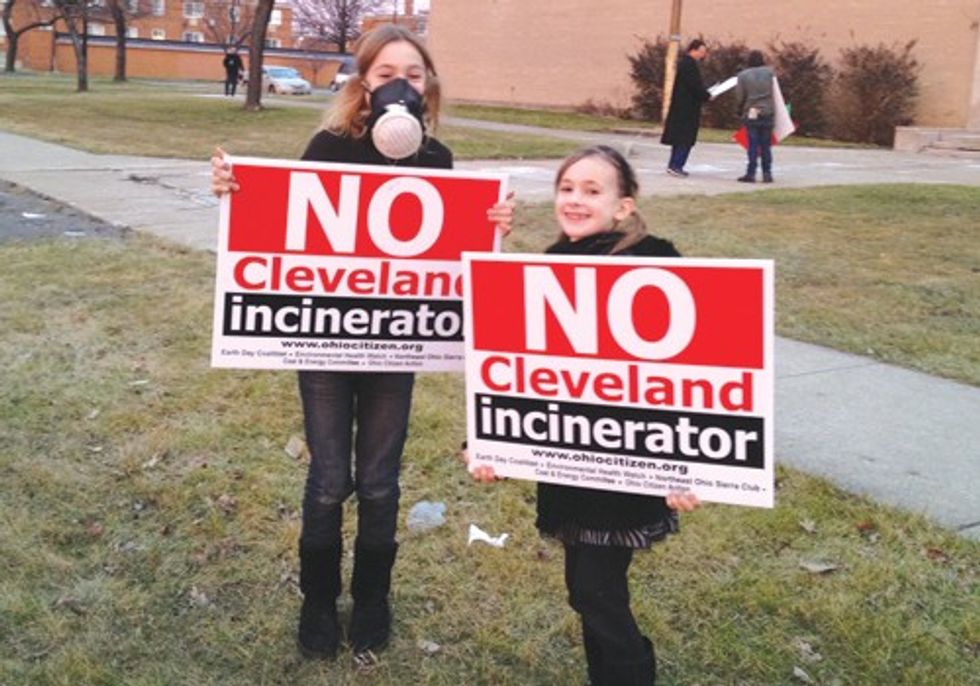 The City of Cleveland’s plans to build a garbage incinerator on the city’s west side fell to pieces in late March when it fired the project consultant. Cleveland Public Power (CPP) had signed a $1.5 million no-bid contract in March 2010 with Peter Tien of Princetown Environmental Group to design the proposed facility.

Tien was fired for submitting faulty design reports, including error-ridden financial projections. All of the plans for this plant were based on Tien’s design and the use of the Kinsei-Sangyo technology he represents.

Citizens hard work pays off
In  January and February, hundreds of Clevelanders attended six public hearings to voice their opposition to the city’s plan. On Feb. 23, the day the official comment period on the  facility’s proposed air pollution permit ended, two significant events occurred that vindicated the public’s objections:

1) U.S. Environmental Protection Agency (EPA) says air permit violates the Clean Air Act
The U.S. EPA told CPP that its proposed facility would be classified as an “incinerator” and would be required to follow the rules as such, rather than as just a “gasifier” as the city claimed. The EPA said the incinerator would be considered a new “major” source of pollution, and would be subject to stronger monitoring and pollution reduction measures than “minor” sources.

The U.S. EPA also said the city and Ohio EPA should abandon the permit that had been submitted and start the process all over again.

CPP, with consultants hired by Peter Tien, scrambled to respond to the U.S. EPA’s evaluation by announcing it would have three combustion units at its proposed garbage incinerator rather than four. CPP also said it would raise the height of the smoke stacks from 175 to 200 feet, and change the emissions of nitrogen oxide to be just under the  federal threshold for a major polluter.

However, the amount of harmful pollution from the plant remained essentially the same in the new configuration. The revised version of the incinerator would emit 78 tons of soot—virtually the same as the previous plan. It would emit more dioxin and would still be the largest mercury polluter in Cuyahoga County. Raising the stacks would only spread the pollution over a larger area, affecting more people. The status of the permit is now unclear, due to the U.S. EPA’s comments and the fact that the city’s plan was based on Tien’s design.

2) Cleveland notifies Tien its plan to terminate his contract
The city sent Tien a warning letter on Feb. 23, telling him it planned to terminated his contract unless he could “cure his deficiencies” within 10 days. By March 7 he had submitted a new report. However, the new report contained many of the same errors, including faulty financial projections and basic mathematical errors. The termination was made final on March 22.

Public support builds for recycling and composting
At each of the public hearings for the incinerator, Cleveland Solid Waste Commissioner Ronnie Owens described the city’s plans to roll out a citywide curbside recycling program. Citizens expressed strong support for this program, and challenged the city’s relatively low goal of recycling 25 percent of its waste stream, when 62 percent of the waste stream is recyclable.

Citizens also urged the city to become a leader by developing a strong composting program, given the robust local urban agriculture movement and the significant portion of waste that can be composted. The incinerator, as planned, would have burned all compostable organic waste, since it would need the high heat content of those wastes. Ohio Citizen Action, Earth Day Coalition, Environmental Health Watch and other groups are planning on holding a day-long citywide forum on recycling and composting on Saturday, June 2. For more information on this event, contact Sandy Buchanan at [email protected] or Chris Trepal at [email protected].

Cleveland Public Power doesn’t need an incinerator to meet “advanced energy” standards
In its full page ads promoting the incinerator in January, CPP said the alternative to building the facility is to “keep doing what we are doing,” including “continue buying 99.9 percent of our power from the market.” CPP also said it needs to build the incinerator to “obtain electric generation that helps meet the Advanced Energy Portfolio Standards goals for CPP.”

Both of these claims are red herrings. CPP has in fact already signed long term “take or pay” contracts with American Municipal Power (AMP) to become, in effect, owners of at least 75 megawatts of baseload power and 60 megawatts of intermediate power that does not come from the market. The intermediate power has already come on line, and most of the other new plants are slated to go on line in 2012 and 2013. This means CPP has already committed to having at least 40 percent of its baseload power come from non-market sources.

These contracts include 50 megawatts of power from AMP’s new hydro plants on the Ohio River. The hydro power meets the city’s definition of “advanced energy,” and will allow the city to fully meet, and likely surpass, its own standard of purchasing 15 percent of its power by renewable sources by 2015. CPP does not need a municipal waste incinerator to meet this standard.

Power from an incinerator would not be “clean” or “green.” Megawatt for megawatt, the proposed incinerator would be more polluting than a new coal-fired power plant, according to the incinerator’s proposed air pollution permit. At the public hearings, citizens urged CPP to invest in real sources of renewable energy and to investigate solar power, wind power and energy efficiency.