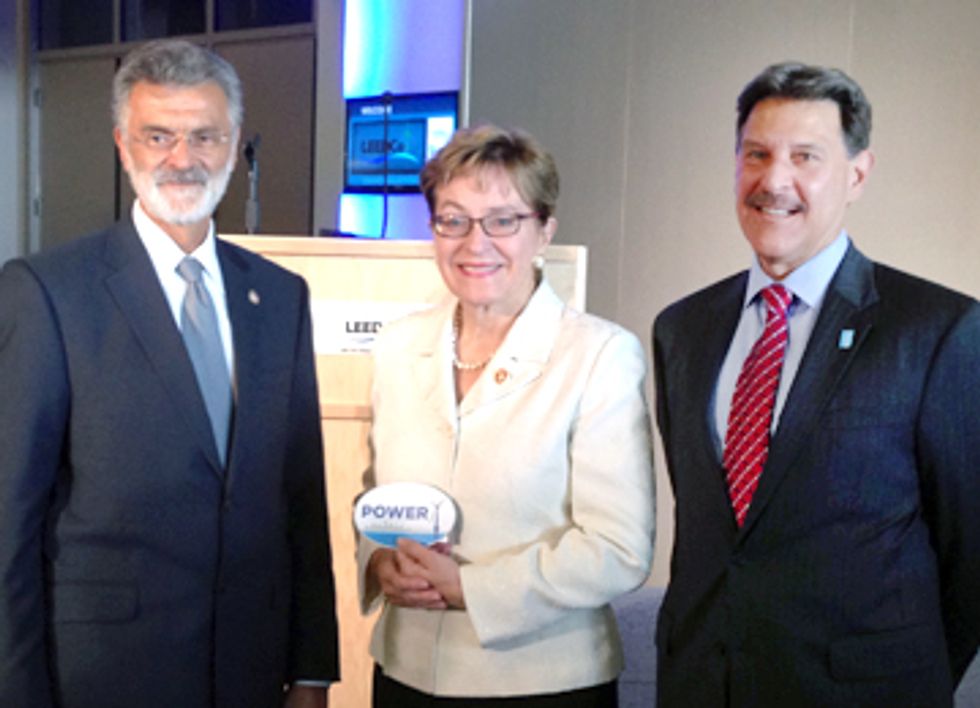 The Lake Erie Energy Development Corporation (LEEDCo) announced today that its POWER Pledge program to build local stakeholder support for the development of an offshore wind farm on Lake Erie has received more than 4,500 signatures from people living and working in Northeast Ohio.

LEEDCo’s “Icebreaker” demonstration project consists of building six, 3 megawatt, American made wind turbines seven miles off the coast of downtown Cleveland in Lake Erie. Icebreaker will serve as the catalyst for a thriving offshore wind energy industry that improves the environment, creates local jobs and advances U.S. energy security. The demonstration of market demand and community support is one essential way for LEEDCo to secure Power Purchase Agreements with utilities and then additional Department of Energy funding.

The POWER Pledge milestone and other progress on the offshore wind demonstration project were celebrated at today’s POWER UP for Offshore Wind event at the new Cleveland Convention Center, which provided the crowd with spectacular views of the Lake Erie waterfront and the wind turbine at the Great Lakes Science Center. The event featured a project update by LEEDCo President Dr. Lorry Wagner, comments of support from Cleveland Mayor Frank G. Jackson and U.S. Rep. Marcy Kaptur (D-OH), and approximately 200 supporters representing various stakeholders from the local community.

“LEEDCo’s ‘Icebreaker’ project is one of only seven offshore wind demonstration projects in the country that has $4 million in direct financial support from the Department of Energy, and the opportunity to earn an additional $46.7 million,” said LEEDCo President Dr. Lorry Wagner. “We are very pleased to have so much support from the region’s elected officials, other business and community leaders, and our general public stakeholders. Community engagement and support are critical to our success, and the support we have received for the POWER Pledge is very encouraging for the future of offshore wind in the Great Lakes.”

Mayor Jackson has been a driving force for sustainability and alternative energy in Northeast Ohio since starting the Sustainable Cleveland 2019 initiative in 2009 and creating the City’s Office of Sustainability. 2013 is the City’s celebration year for Renewable and Advanced Energy.

“The City of Cleveland fully supports the ‘Icebreaker’ demonstration project as a first step toward the creation of an offshore wind farm that will provide long-term benefits to our economy, our workforce and our community,” said Mayor Frank G. Jackson. “In August of 2011, I asked the community to rally behind LEEDCo’s vision, and that’s what we’re seeing here today.”

Rep. Kaptur is the senior Democratic woman in the U.S. House of Representatives and the ranking member of the Energy and Water Subcommittee of the U.S. House Appropriations Committee. Her legislative priorities include energy independence and the environment.

"Wind power is an important source of energy and jobs in Northern Ohio's future," said Congresswoman Kaptur. "Lake Erie is the Saudi Arabia of wind power and the POWER Pledge is a perfect way for the public to express its support."

Many of the attendees signed the POWER Pledge at the event or had already signed it since LEEDCo began collecting signatures in the spring. LEEDCo has been building public support for the offshore wind demonstration program and the POWER Pledge through speaking engagements, local events, a community canvassing program, billboards, car magnets, etc.

By signing the POWER Pledge, people are saying they would be willing to pay a somewhat higher price for their electricity to get a portion of their power from offshore wind. The pledge is being used to help LEEDCo gauge community support and demonstrate a strong market in Northeast Ohio for clean energy generated on Lake Erie. LEEDCo will use signed pledges to encourage local electricity suppliers to make this premium source of power available to customers, giving them the opportunity to be among the project’s first customers when Icebreaker becomes operational in 2017.