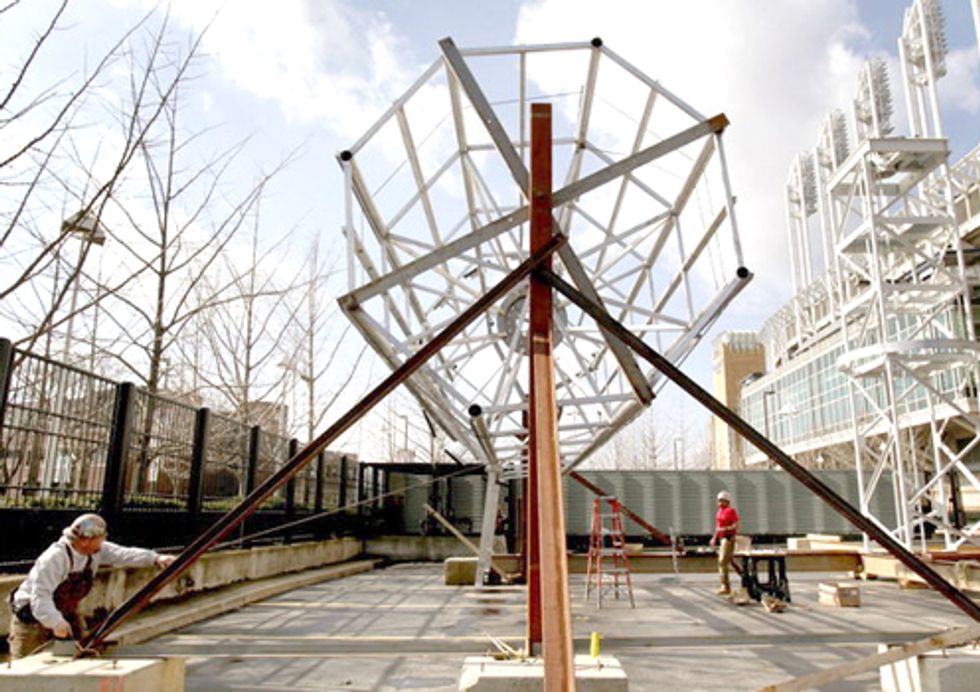 Used with Permission of NRDC - Switchboard

This morning the Cleveland Indians unveiled their revolutionary wind turbine, the first of its kind to sit atop a ballpark.

After three years of work planning, designing and building the innovative corkscrew-shaped turbine in partnership with Cleveland State University’s Fenn College of Engineering, the Indians secured the turbine on top of the southeast corner of Progressive Field in the space of only a couple of hours.

“We will first lift and install the triangular steel platform, then raise and secure the turbine,” said Brad Mohr, the Indians’ assistant director of Ballpark Operations. “It will be fully installed by lunchtime.”

The relatively short installation process is likely benefited by the fact that Mohr’s team doesn’t have to transport the turbine very far to its final resting point. In fact, the 3,000-pound turbine was strategically assembled in the players’ parking lot at Progressive Field to cut down on transportation emissions and costs.

Over the past couple of months, ironworkers affixed 80 translucent white plastic pieces around a heavy aluminum frame to form the thick corkscrew helix. Today the helix will be attached to the steel base that will hold it in place on the ballpark roof.

Watch a video and view a slideshow of the turbine construction in the parking lot at Progressive Field featured in Cleveland’s The Plain Dealer.

With the turbine installed and lit from within by colored LED lights, the Indians will turn next to engaging fans with interactive digital kiosks about wind energy. Fans will be able to pedal away on stationary bikes installed around the ballpark to try and generate as much power as the turbine.

“This is a great opportunity to teach fans about the importance of clean energy technologies,” said Mohr.

As I describe in my blog announcing the Indians’ plans for a turbine, this isn’t the first renewable energy project the Indians have pioneered in the region. In June 2007 the Indians installed a 42-panel solar electric system—visible to the thousands of fans who pass through the ballpark each game day—that generates enough power to run all 400 televisions throughout Progressive Field with 8.4 kilowatts of clean renewable energy (approximately 10,000 kWh/year).

Although the solar array is small, the cultural message being sent by the Indians about the need to find environmentally-friendly alternatives to fossil fuels is significant.

In fact, the Indians have an impressive record of environmental initiatives. Since 2008, Mohr’s expanded recycling program—with 125 recycling receptacles around the ballpark—has cut the stadium’s trash tonnage in half and saved the ballpark $50,000 each year.

“That's where we see the financial difference, that and in recycling, avoiding trash being hauled away,” Mohr said. “Green initiatives are here to stay because they save teams money.”

Other noteworthy environmental projects by the Indians include:

With help from NRDC and its many greening resources, like the Greening Advisor, the Indians have made impressive strides in improving the efficiency of their operations to save hundreds of thousands of dollars, while benefiting the environment and educating thousands of fans.