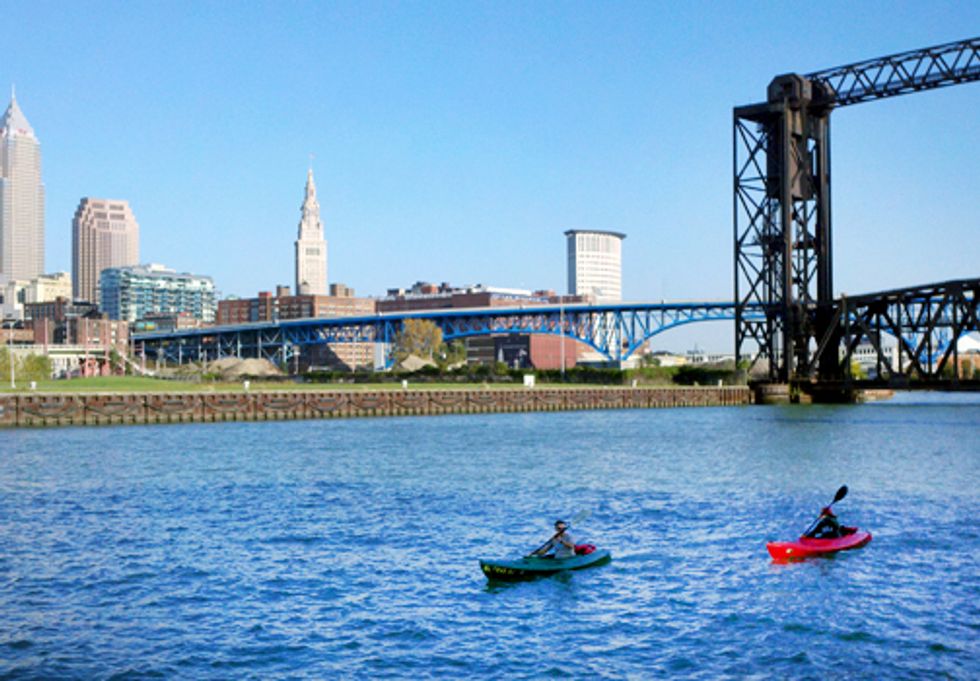 Kayaking on the Cuyahoga River in Cleveland, Ohio.

As the Clean Water Act celebrates its 40th anniversary, conservation leaders are asking public officials to not undermine protections which have lead to healthier water to drink; cleaner streams, rivers and lakes in which to swim, fish and play; and dramatically lower rates of natural wetland loss.

“The Clean Water Act has been instrumental in improving our environment and economy for people across the nation,” said Jan Goldman-Carter, senior manager of Wetlands and Water Resources for the National Wildlife Federation. “Unfortunately, over the last decade Clean Water Act protections have been eroding. Public officials need to restore bedrock protections that benefit our health, economy and way of life.”

For the past decade, Clean Water Act protections for wetlands, lakes and streams have been put at risk. Over the past two years, the Clean Water Act has been under relentless attack by some members of Congress. These attacks are jeopardizing drinking water for 117 million Americans and accelerating wetland losses that damage hunting, fishing and wildlife watching.

The Clean Water Act anniversary comes amidst a national commitment to restore the Great Lakes and other iconic U.S. waters. The Great Lakes have received more than $1 billion to restore habitat, clean up toxic pollutants and reduce run-off from farms and cities.

“Great Lakes restoration projects are producing results, but there is more work to do,” said Gary Botzek, executive director of the Minnesota Conservation Federation. “At a time when the nation is making historic investments to restore the Great Lakes, Mississippi River and other U.S. waters, it does not make sense to undermine those efforts by weakening strong clean water protections.”

The Clean Water Act has been essential in the effort to restore the Great Lakes and the waters which feed it, including streams and wetlands. U.S. Congress passed the law four decades ago, as rivers were catching fire, Lake Erie was declared “dead” and fish and wildlife populations were suffering devastating impacts. Passage of the act—and subsequent infusion of federal funds to help modernize wastewater infrastructure in communities across the region and across the country—helped to dramatically improve water quality.

“Before passage of the Clean Water Act, people treated waterways like open sewers,” said Chuck Matyska, president of Wisconsin Wildlife Federation. “Now, water quality has improved. Fish populations are back. Simply, the Clean Water Act is a winner for people and wildlife.”

Clean water is especially vital to the economy in Illinois, Indiana, Michigan, Minnesota, Ohio, New York, Pennsylvania and Wisconsin. According to the U.S. Fish and Wildlife Service, fishing, hunting and wildlife-watching generated $36.8 billion per year in those states in 2011.

“For the first time in decades, the number of people fishing and hunting has increased,” said Kent Wood, legislative director for Michigan United Conservation Clubs. “The Clean Water Act has paved the way for healthier habitat and healthier fish and wildlife populations—and that is healthier for the economy as well. Good hunting and fishing opportunities result from abundant wildlife. Wildlife requires good habitat, and good habitat requires clean water. It is a chain. You cannot have one without the other, and it would be a mistake to undermine the progress we’re seeing by weakening the Clean Water Act.”

“A key part of the Clean Water Act has been to give millions of people a voice to protect and improve the waters that they depend on,” said Brian Perbix, grassroots organizer for Prairie Rivers Network. “The act has helped clean up water across the country—but there’s still more to do. Now’s not the time to chisel away at one of the most successful laws in this nation’s history.”