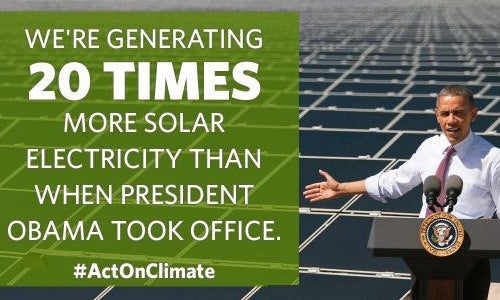 “Suddenly I had this weird feeling, like I couldn’t breathe” —@POTUS on running in L.A. in 1979 #CleanPowerPlan http://t.co/0mjv24on1Z

The summary of the final rule, states that the EPA is establishing:

The EPA also released this video with Administrator Gina McCarthy explaining in detail the impact the Clean Power Plan will have on laying “the foundation for a healthier future and a stronger economy.”

President Obama is calling the plan “the biggest, most important steps we’ve ever taken to combat climate change.” He said in a White House video release Sunday, “It’s time for America and the world to act on climate change.”

Ken Berlin, president and CEO of The Climate Reality Project, agrees. “The final, strengthened Clean Power Plan comes at a critical time, not only for the United States, but also for the entire world,” he said.

“Across the globe, this commitment to cut emissions from power plants by nearly a third from 2005 levels will be seen as a crucial step toward fulfilling President Obama’s pledge to reduce our country’s greenhouse gas emissions 26-28 percent by 2025, which will set us on the path to achieving a strong emissions reductions agreement at the upcoming COP21 climate negotiations.”