Renewable Energy Booming After a Decade of Progress 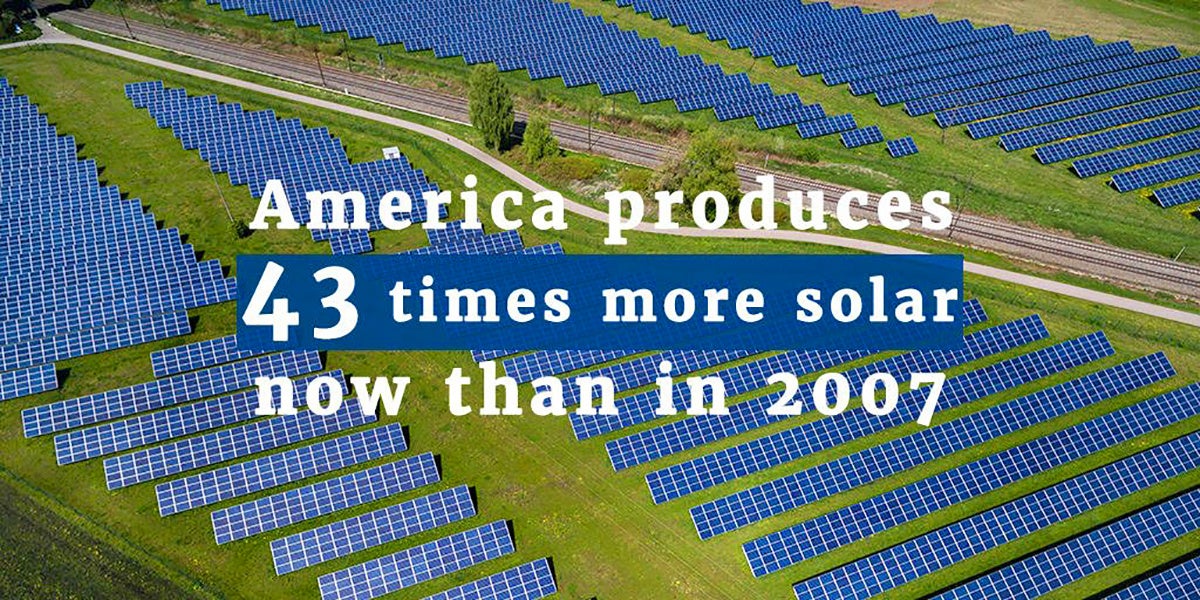 The sun is rising on a newer, cleaner era of American energy use.

The U.S. generates nearly eight times as much electricity from the sun and the wind than it did in 2007—enough to power more than 25 million homes—and the average American uses 10 percent less energy than he or she did 10 years ago, according to a new report by Environment America Research and Policy Center.

The report, Renewables on the Rise: A Decade of Progress Toward a Clean Energy Future, also cites a 20-fold increase in battery storage of electricity and the meteoric rise in sales of electric cars—from virtually none in 2007 to nearly 160,000 last year—as evidence that despite attempted rollbacks in Washington, a clean energy revolution is under way across the U.S.

“Despite anti-science, anti-clean energy rhetoric coming from the Trump administration and many in Congress, the science is clear—fossil fuels pollute our air, water and land, threatening our health and changing our climate even faster than scientists predicted,” said Rob Sargent, energy program director for Environment America Research and Policy Center. “The good news is that the progress we’ve made in the last decade on renewable energy, energy savings and technologies such as battery storage and electric cars should give us the confidence that renewable energy can be America’s energy choice.”

The new report, authored by Environment America Research & Policy Center and Frontier Group; analyzes the growth of key technologies needed to power the nation with clean, renewable energy; including wind, solar, energy efficiency, energy storage and electric vehicles. Beyond a national assessment, the report provides state by state rankings on how effectively each state is adopting these crucial technologies.

W/ @FrontierGroupUS, thrilled to release Renewables on the Rise report! Renewables have made huge progress in 10yrs https://t.co/rebQ6ps0et pic.twitter.com/T1fzbzr2us

“Key clean energy technologies are improving rapidly and getting cheaper seemingly every day,” said Gideon Weissman of Frontier Group, report co-author. “These and other advances open up new opportunities to end our dependence on fossil fuels and embrace a future built on clean, renewable energy.”

“Given the environmental benefits, clean, renewable energy should be the go-to option for businesses, utilities, governments and households across the country,” said Sargent. “It won’t be easy. But we have no choice. Every day the urgency of our environmental challenges becomes clearer. That’s why we’re ready to work to move America to a future powered with clean, renewable energy.”