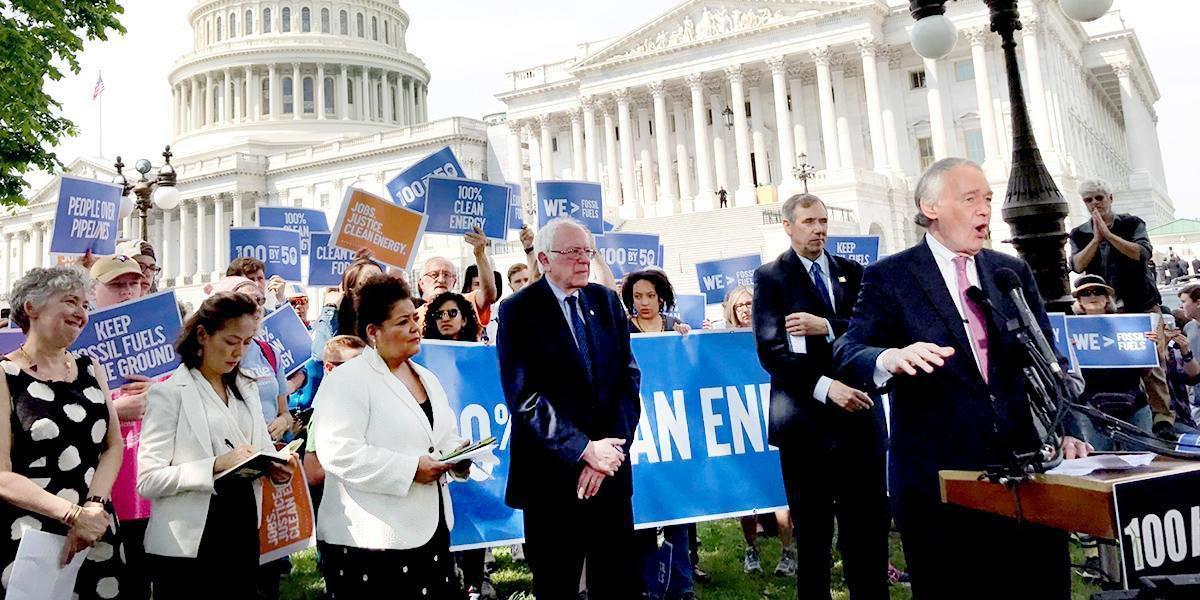 Ahead of the People’s Climate March, Senators Jeff Merkley, Bernie Sanders and Ed Markey stood beside movement leaders to introduce legislation that will completely phase out fossil fuel use by 2050. The “100 by ’50 Act” outlines a bold plan to support workers and to prioritize low-income communities while replacing oil, coal and gas with clean energy sources like wind and solar.

“100 is an important number,” said 350.org co-founder Bill McKibben. “Instead of making changes around the margins, this bill would finally commit America to the wholesale energy transformation that technology has made possible and affordable, and that an eroding climate makes utterly essential. This bill won’t pass Congress immediately—the fossil fuel industry will see to that—but it will change the debate in fundamental ways.”

The “100 by ’50 Act” would put a halt to new fossil fuel infrastructure projects like Keystone XL and the Dakota Access pipeline, and fracked gas pipelines facing opposition from tribes and landowners. Instead of new fossil fuel infrastructure, the bill invests hundreds of billions of dollars per year in clean energy—enough to create four million jobs. These large-scale clean energy investments prioritize black, brown and low-income communities on the frontlines of the climate crisis.

“While fossil fuel billionaires supporting Trump’s administration put profits before people, we now have a legislative roadmap to phase out this dirty industry once and for all,” said 350.org Executive Director May Boeve. “This bill deploys clean energy in communities that need it most and keeps fossil fuels in the ground. From Standing Rock to the Peoples Climate March, movement leaders have been calling for these solutions for years. This bill is proof that organizing works, and it’s the beginning of an important conversation.”

The issues covered by the bill reflect the demands of the climate movement, from Standing Rock to the fossil fuel divestment campaign, to the fight to keep fossil fuels in the ground. The content stands in bright contrast to Trump’s vision of a more polluted America where fossil fuel billionaires profit at the public’s expense. While this precedent setting bill is unlikely to pass during the Trump administration, similar bills are being considered at the state and local level in California, Massachusetts, New York and elsewhere across the country.

At a press conference held by Senators Merkley and Sanders, speakers included representatives from climate and environmental justice groups, progressive organizations and more. A crowd of supporters carried banners and signs reading “100% Clean Energy For All,” and, “Keep Fossil Fuels In The Ground.” The event was part of an ongoing week of action leading up to the People’s Climate March on April 29, when thousands of people are converging in DC and around the country to march for jobs, justice and the climate.