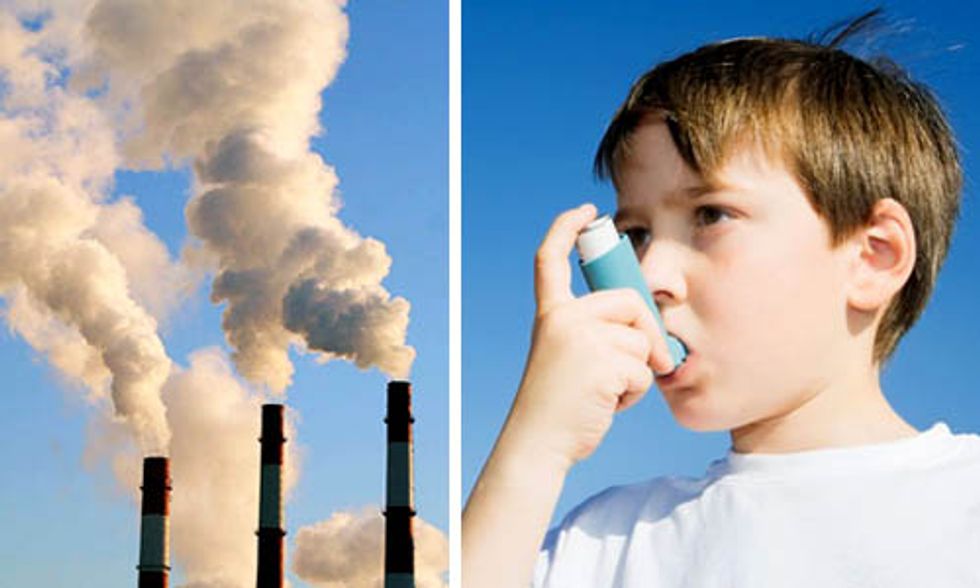 By Ellen Webb and Julie Moon, Center for Environmental Health

The U.S. House of Representatives is voting this week on the latest attempt to stifle the Clean Air Act: H.R. 4775, the so-called “Ozone Standards Implementation Act."

We now know that ozone is not only harmful to the environment, but also human health.

In direct contrast to its title, the bill threatens to restrict implementation of the U.S. Environmental Protection Agency's (EPA) newest standards for ozone and other "criteria" pollutants supposed to be protected by the National Ambient Air Quality Standards (NAQQS): nitrogen oxides, sulfur dioxide, carbon monoxide, particulate matter and lead. As criteria pollutants are both the most common air pollutants in the U.S. and considered harmful to human and environmental health, it is clear that passing H.R. 4775 into law will jeopardize public and environmental health.

The bill proposes to dismantle the Clean Air Act systematically: by imposing a two-fold delay of the time in which the EPA is required to review national health standards for ozone and other harmful pollutants (from 5 to 10 years); by imposing an additional delay on the time states have to publicize healthy and unhealthy areas of pollution (and subsequently adopt and implement cleanup standards) from one to eight years; by allowing corporations that apply for permits to pollute at levels beyond national health standards; by imposing considerations of cost and “technological feasibility" in the process of setting NAAQs, which has historically only considered medical and public health data.

Each of these measures—and the bill lists more—undermine the fundamental purpose of the Clean Air Act. The delays in statutory deadlines mean longer delays in practice and delaying implementation of science-based emission standards means that more Americans will suffer from pollution for longer. Forcing a consideration of cost and “technological feasibility" dismisses the fact that costs have no bearing on what is safe and unsafe and thus should not influence on the process of determining safety thresholds for exposure to pollutants.

Human and environmental health advocates have refused to stay silent on such a dangerous bill. In April, 13 major environment, science and health advocacy groups including the Physicians for Social Responsibility, Natural Resources Defense Council and Union for Concerned Scientists signed a letter condemning the bill as “one of the most irresponsible compilations of attacks on Clean Air Act health standards ever to be introduced in Congress. If this bill were to become law, it would be very detrimental for our nation's air quality, public health and Americans' right to clean, safe air ... It eliminates Americans' 46-year right to healthy air based on medical science and substitutes a process in which politics and profits will dictate acceptable air quality. The bill delays life-saving health standards that already are years overdue."

Fundamentally, the bill seems to be completely disregarding the growing number of studies publicizing the health risks of exposure to ozone and other criteria pollutants. In direct backlash to a more health protective, lowered ozone emission standard of 60ppb proposed by the EPA in 2015, section 3(a)(2) of H.R. 4775 singles out the pollutant and prohibits the EPA from proposing new standards before 2025. In other words, the bill seeks to not only ignore ozone standards recommended by health experts but also delay additional suggestions for a decade.

Yet we now know that ozone is not only harmful to the environment (it degrades habitats and decreases biodiversity by interfering with photosynthesis), but also human health. Last month, the Center for Environmental Health's paper on the respiratory health impacts of pollutants from unconventional oil and gas (UOG) operations reported that ozone pollution has been linked with major respiratory health problems ranging from coughing and wheezing to pulmonary infection and severe asthmatic exacerbations.

Our review found that, alongside other criteria pollutants in threat of deregulation by H.R. 4775 and associated with UOG like particulate matter, ozone is associated with: 1. Reduced lung and pulmonary function; 2. Increased susceptibility to lung infection and decreased immunity and 3. the induction of asthma (the third leading cause of hospitalization among children under 15 years). The latter respiratory health impact—asthma—is particularly concerning, since, asthma is not merely a health burden but also a socioeconomic one: asthma is also a leading cause of school absenteeism. One study estimated that if ozone standards were tightened, total school absences would be reduced by about 1 million. Further, the direct (treatment) and indirect (lost days of productivity) for treating asthma in the U.S. has been estimated to be $56 billion.