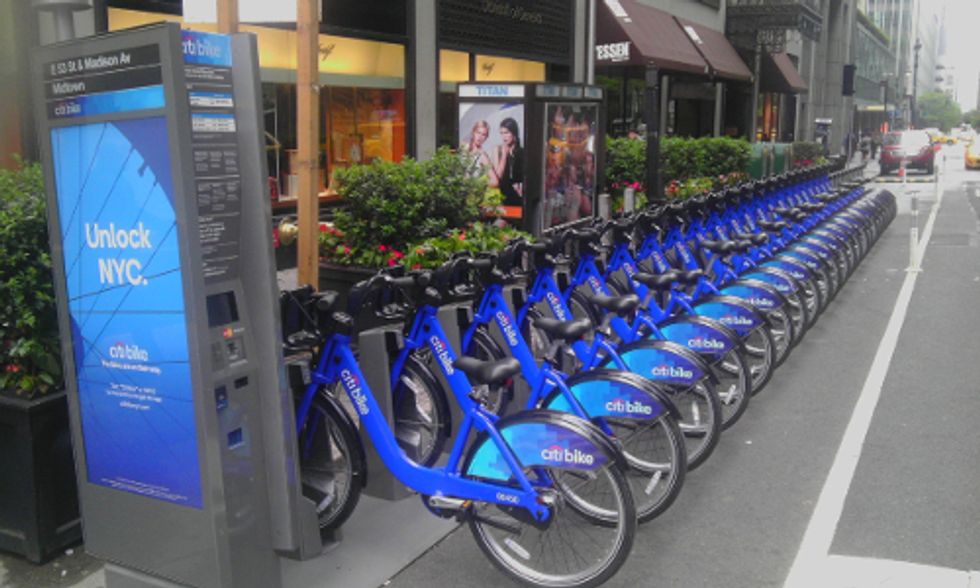 Bike sharing in New York City has had a promising yet problematic start, but there is little question that it is a program worth keeping and expanding. It is clear that the de Blasio administration agrees and, in one of their first efforts to expand former mayor Bloomberg's sustainability agenda, are about to double the size of the city's bike sharing program. Bloomberg's legacy complicates de Blasio's task. As Matt Flegenheimer observed in a NY Times piece on Citi Bike, "Mr. Bloomberg's successor, Bill de Blasio, has been confronted with a ... consequential choice: how aggressively to embrace—and reimagine—a program that remains inextricably linked to the last administration." His answer, fittingly enough, is to expand the program in the city's outer boroughs.

The great virtue of bike sharing programs is that they expand the mass transit system. Photo credit: Wikimedia

... is close to hammering out an agreement that could enlarge the footprint of Citi Bike to upper Manhattan, into Queens and further into Brooklyn over the next few years, these people said. The number of bikes would nearly double, from 6,200 to about 12,000. The pact would allow Citi Bike's operator, Alta Bicycle Share Inc., more flexibility in raising the price of the $95 annual memberships, which could increase to $140 or more, these people said. More than 100,000 annual memberships have been sold.

As part of the tentative agreement, REQX Ventures would secure a controlling stake in Alta, these people said, thrusting the Related affiliate to the forefront of a budding industry spreading across the U.S. Alta, based in Portland, Ore., runs bike-share and rental systems in cities from Boston to San Francisco.

As Tangel reports in his piece, New York City's bike sharing program is unique because it does not rely on a public subsidy, although a contract with the city governs the program and has provided access to public space for bike rental stations. The original contract made inaccurate assumptions about the mix of resident and tourist rentals and:

Alta's original contract was ambiguous about whether the company could raise Citi Bike rates without city approval. Because the city wouldn't let Alta raise prices without first lining up new capital, Citi Bike's operator has left potential revenue on the table as it awaits a new agreement, current members renew and new ones sign up. Alta has said its $95 annual memberships were money-losers because riders used the bikes twice as much as projected.

The potential for attracting additional private capital to New York City's bike sharing program is significant and has been a test for the de Blasio administration. If public-private partnership is to thrive around urban sustainability issues, government needs to understand how to work with private developers like Related. Under the Bloomberg administration, that knowledge was assumed to be in place—even if it wasn't always present. Corporate leaders knew that the final decision maker in the deal was someone who came from their world: Mike Bloomberg. They do not know that now; Bill de Blasio has spent his career in public service. However, these early efforts at public-private partnership have begun to set a positive tone for relations between our progressive mayor and New York City's private sector.

Actually, if the current administration can't work with Related, it will be hard to imagine success with other developers. Fortunately, there are clear signs that the new administration gets it. They have already demonstrated an ability to work with private developers on affordable housing. Bike sharing is providing a high-profile opportunity to work with industry on sustainability issues. The success of this deal could lead to other opportunities as well.

Related has long been a leader in green building, and has also understood the importance of public-private partnership in New York City real estate development. Land is a scarce commodity in New York City. For many years, the city's land development has required rules and planning. Related is a very sophisticated player in the political economy of New York City, and is expert at navigating the very complex, but necessary, regulatory process required to build large-scale developments in New York. In that respect, New York's mayors are fortunate. They do not need to deal with a right-wing, anti-regulatory private sector, but with sophisticated companies that understand the need for government to play a central role in developing this complicated city.

It is significant that this leading developer sees the importance and potential in bike sharing. While some of the company's motivation appears to be public service and corporate responsibility, I assume they see the potential for making money here as well. New York City's government and people have an interest in the survival and expansion of bike sharing. Since the city cannot afford to invest its own capital in the program, it needs to attract private capital if bike sharing is to grow and thrive. It is good news to see that the relationship with Related and Equinox is being cultivated by the mayor and his team.

The great virtue of bike sharing programs is that they expand the mass transit system. You can bike to work, but take the subway home. You can bike part of the way to work and take mass transit the rest of the way. While bike commuting is not for everyone, the popularity of the Citi Bike program is undeniable. The problem has been that the rates are too low, the software too buggy, and the system too small. Raising the rates may decrease utilization, but expanding the number of neighborhoods served will increase it.

Bike riding has many virtues as a sustainable means of transport. Its only use of energy is in making and shipping the bikes. It improves public health and enables people to make more efficient use of time by combining commuting with exercise. In a growing number of cities, bikes are becoming a key transportation resource, and an integral part of a city's transportation system. While New York City's use of bike transport is still relatively small, it is growing. According to the New York City Department of Transportation:

New York City doubled bicycle commuting between 2007 and 2011, and aims to triple it by 2017. In New York City, 10% of auto trips are under one-half mile, 22% are under 1 mile and 56% are under 3 miles—distances readily served by bicycle. DOT has completed the City's ambitious goal of building 200 bike-lane miles in all five boroughs in just three years, nearly doubling the citywide on-street bike network while reshaping the city's streets to make them safer for everyone who uses them.

Combined with bike sharing, a system of bike lanes provides the infrastructure needed to support increased use of cycling as a means of transportation. The de Blasio administration's emphasis on traffic safety for drivers and pedestrians holds the potential of increasing the safety of cycling as well. It is true that there are between 50 and 100 days per year when weather conditions make bike riding less attractive and possibly more dangerous; nevertheless, there is significant room for expansion in New York and in many other American cities. The demise of Citi Bike would have been a significant blow to this small but important element of a sustainable transportation system.

The deal to save Citi Bike is a clear and tangible indication of Mayor de Blasio's commitment to expand the sustainability agenda begun by his predecessor. This is good news because it demonstrates that local sustainability initiatives have become a popular and permanent part of the services expected by New Yorkers and ensured by their government.

LeBron James, Place and the Search for Sustainable Communities