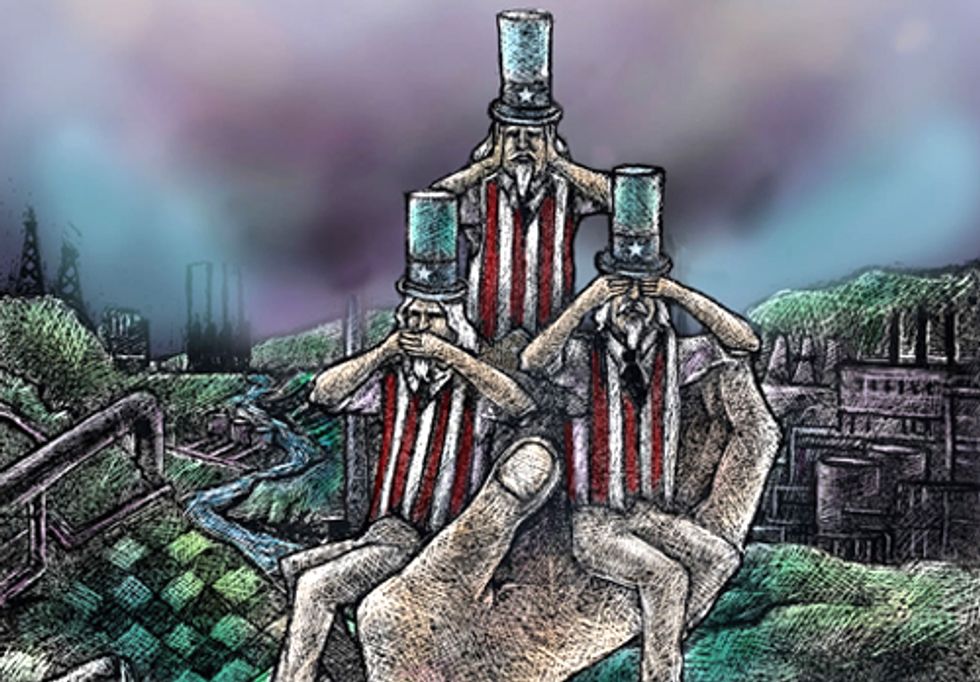 In January 2010, five U.S. Supreme Court justices legalized the wholesale purchase of America’s elected officials. In its landmark decision, Citizens United v. Federal Elections Commission, the court’s majority ruled that corporations, as persons, have a First Amendment right to spend unlimited amounts of money, as speech, on campaign advertisements as long as those communications are not formally coordinated with any candidate. In Chief Justice Roberts’s court, at least, political expenditures by corporations “do not give rise to corruption or the appearance of corruption.”

Here in the real world, when someone—or some “thing,” in the case of a corporation—has piles of money, that person or thing can purchase more “speech.” The unequal distribution of the power to speak can then lead to an out-of-balance political system in which a few actors wield disproportionate influence, a situation that undermines the ideal of one-person one-vote.

Recognizing this, 22 states had laws on the books that put limits on political donations. Sixty years of precedent in federal law also restricted corporate campaign expenditures. Roberts’s court found such restrictions unconstitutional and overturned those commonsense protections. In a single ruling, political corruption was legalized.

Then the courts decriminalized the laundering of political money. In March 2010, the U.S. Court of Appeals for the District of Columbia applied Citizens United in SpeechNow.org v. FEC and ruled that an organization formed to accept contributions and make “independent” expenditures must register as a Political Action Committee, or PAC. However, unlike traditional PACs, the new “independent-expenditures” only PACs could accept unlimited contributions from individuals as well as corporations and unions. Even more worrisome, the new breed of PACs—or “Super PACs,” as they’ve come to be known—do not have to disclose the names of their donors. A political attack ad can now appear on television with no one knowing who paid for it.

Since those rulings, Super PACs and their affiliated nonprofit organizations have unleashed a flood of dollars into the political ecosystem. In the 2012 election season, spending through July by these mutant PACs was $181 million. If the early trends in Super PAC expenditures for the 2012 campaign continue, the presidency—as well as many other “publicly elected” representatives—will be bought by a handful of oligarchs and corporations whose identity is shielded from public scrutiny. As Rick Hasen, a University of California-Irvine expert in election law, puts it: “Super PACs are for the 1 percent.”

Despite the impression given by pundits on cable television and talk radio, politics is not a game. It’s how we collectively decide our national priorities, and it affects real people in real ways. When an elected body is considering rules about, say, how and whether mines can discharge wastewater into local streams, the outcome doesn’t just affect which political party wins and which loses. It also affects people’s lives. If a mining corporation has a bigger say in the decision than the mine’s neighbors, it violates the principle of fairness that underlies a deliberative democracy.

That scenario isn’t a hypothetical. A century ago, Montana passed its Corrupt Practices Act to limit financial contributions to political candidates, a reaction to the corrosive effects of the state’s mining barons on its electoral system. In June, the Supreme Court—voting along the same lines as the original Citizens United decision—struck down the Montana law.

The courts’ attacks on campaign finance regulations have become a catalyst for Americans to engage in a national dialogue about who rules—corporations or persons. The prospect of so-called “dark money” overwhelming our democratic process has forced citizens to confront the degree to which corporations control our politics and, by extension, our government and us. Bankrupted by the housing crisis, disgusted by the bank bailouts, and anxious about a political system that is increasingly unresponsive to their needs, many Americans have come to the conclusion that it’s time to reclaim our democracy for real, flesh-and-blood people.

The clearest expression of this new populist movement occurred last fall, when thousands of disenfranchised people occupied public spaces and began imagining how it would look to elevate human rights above corporate rights. The physical camps of the Occupy movement have since disbanded. But the resolve remains and the work continues in what Eleanor Roosevelt called the “small places, close to home.” Among the most inspiring efforts is a national grassroots campaign to amend the constitution and overturn the Citizens United decision.

Citizens have amended the constitution seven times in U.S. history to override Supreme Court decisions—including the amendments to give black men the vote, to give women the vote, to abolish poll taxes, and to expand the franchise to 18-year-olds. Amending the constitution is a Herculean task that requires a broad-based movement with a shared vision, coordinated strategy, and sustained passion and patience. But as Jamie Raskin, a Maryland state senator and a senior fellow at People for the American Way, has observed: “A constitutional amendment always seems impossible—until it becomes inevitable.”

The signs of this nascent amendment movement are encouraging. In June, the U.S. Conference of Mayors unanimously adopted a resolution stating, “corporations should not receive the same legal rights as individual human beings” and calling for urgent action to reverse Citizens United. The conference president is Mayor Antonio Villaraigosa of Los Angeles, the first major city to pass an anti-Citizens United resolution, in December 2011. The Los Angeles City Council acted at the urging of the local chapter of Move to Amend, a national grassroots coalition that has chapters in 29 states and includes hundreds of public interest groups. On a separate but similar track, more than 200 towns and cities across the country have passed ordinances or resolutions declaring that corporations are not considered persons within their jurisdictions.

Grassroots pressure from Move to Amend chapters has also emboldened five states—Hawai‘i, New Mexico, Vermont, Rhode Island and California—to pass resolutions calling for a constitutional amendment to reverse Citizens United. In the nation’s capital, various U.S. Senators and Representatives have introduced six separate constitutional amendments that would address the problems of Citizens United. Although all the amendments return to the state and federal governments the power to restrict campaign contributions, only one—from Senator Bernie Sanders of Vermont—tackles the issue of corporate personhood.

Meanwhile, the group Common Cause has launched a campaign to put “voter instruction” initiatives on the November ballot in as many states as possible. If approved, the initiatives would instruct Congress to adopt a constitutional amendment making it clear that corporations are not people and money is not speech. While voter instructions are non-binding, they carry great weight and were used to pass the Seventeenth Amendment, which allowed voters to directly elect senators to Congress.

The American public is overwhelmingly opposed to the Citizens United decision. When the American Sustainable Business Council, Main Street Alliance and Small Business Majority polled their members, they found two-thirds of business owners saw the Citizens United as bad for small business. According to an ABC News/Washington Post poll conducted in 2010, 80 percent of Americans oppose the ruling, including 65 percent who “strongly” oppose it. A 2011 survey by Hart Research Associates found that 82 percent of voters believe Congress should limit the amount of money corporations can spent on elections.

Supreme Court Justice John Paul Stevens anticipated this rejection when he wrote in his impassioned Citizens United dissent: “At bottom, the Court’s opinion is thus a rejection of the common sense of the American people, who have recognized a need to prevent corporations from undermining self-government since the founding, and who have fought against the distinctive corrupting potential of corporate electioneering since the days of Theodore Roosevelt. It is a strange time to repudiate that common sense. While American democracy is imperfect, few outside the majority of this Court would have thought its flaws included a dearth of corporate money in politics.”

The reaction to Citizens United isn’t just about remedying a single court decision. It’s also about creating a democracy rooted in human rights—the kind of democracy we’ve never truly had. Amending the U.S. Constitution to affirm that people, not corporations, rule is just the latest evolution of the unceasing effort to form a more perfect union.

Riki Ott co-directs Ultimate Civics, a project of Earth Island Institute. She is a co-founder of Move To Amend.