Citizens to Monsanto: 'Get out of Hawaii' 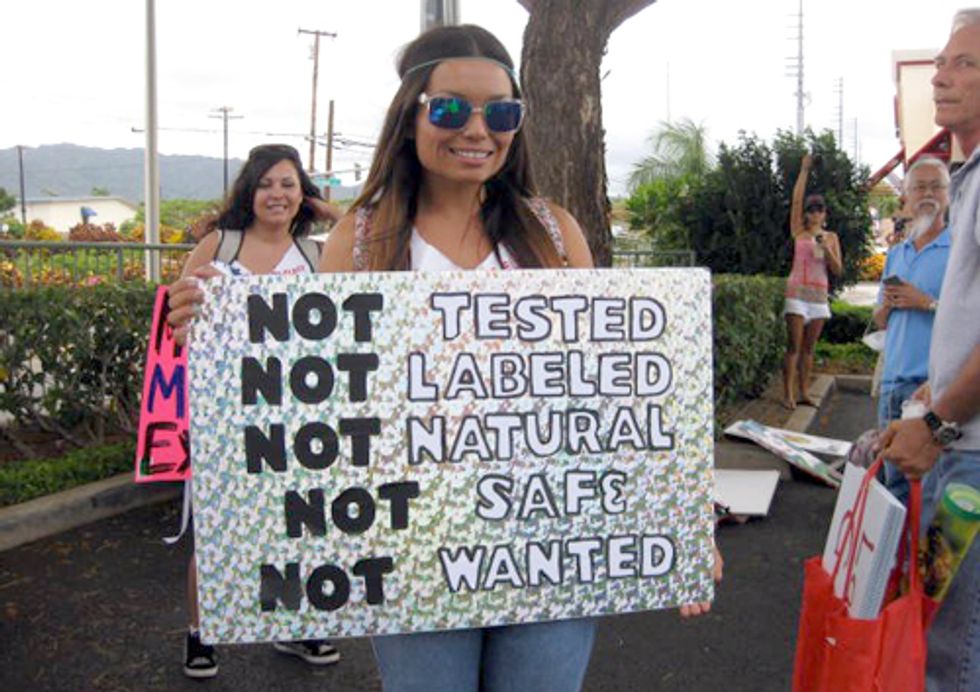 A protestor sums it up for Monsanto outside its corporate headquarters in Oahu on June 28.

Several organizations, including Occupy Wall Street Maui and GMO-Free Maui, as well as more than 100 concerned citizens, held a protest on June 28 in front of the Monsanto Corporation headquarters in Kunia on the Island of Oahu, Hawaii. According to the organizers, the protesters met in Kunia and marched more than half a mile to the Monsanto compound for two hours of roadside sign-waving and chanting, demanding that Monsanto leave Hawaii and saying they need real food, not exported GMO seeds and chemical contamination. The group also demands that genetically engineered (GE) food be labeled.

The protesters wore masks to protect themselves from pesticide drift and GE spores, received lots of support from many in passing cars that honked their horns and waved in support. A nearby resident came to find out what was going on and soon donned a mask himself as he was unaware of the dangers so close to his house. The resident expressed concern about the large trucks and equipment operating at night at Monsanto’s fields.

Monsanto operates about 8,000 acres in Hawaii for GE seed production. According to organizers, these operations use the most valuable agricultural lands and water in food production, as well as large amounts of chemicals and pesticides that are required to grow these crops. Hawaii is a global center for the open-air field testing of experimental GE crops, but no impact studies have been conducted.

Food security is a growing concern in Hawaii as the majority of the food is imported while the biotech industry grows GE seeds for export. The need for locally grown, wholesome, natural, non-toxic food is high on everyone’s priority list. Walter Ritte of “Label It Hawaii” offers a strong message for Monsanto: “Get out of Hawaii, grow food, stop growing seeds and chemicals, grow food, we need food security over here.”

Monsanto stopped operations for the afternoon because of the protest and allowed most workers to leave early. Monsanto erected a barrier and manned a security station at the entrance to their compound. There were several Monsanto employees filming the protesters throughout the event.

This protest follows similar protests recently held on the islands of Maui and Kauai against Monsanto. Activist organizations on the other islands vowed solidarity and stated that they are planning more protests until Monsanto leaves the islands.

Recently, the U.S. has moved to deregulate several varieties of GE crops. However, these decisions fail to take into account several scientifically-validated environmental concerns, such as the indiscriminate nature of genetically modified gene flow in crops, a heavy reliance on faulty data and a high degree of uncertainty in making safety determinations. They also overlook the problem of pesticide-resistant weeds and insects, as well as the widespread corruption of conventional seed varieties by GE strains and documented severe economic injury to farmers and markets. Overlooked as well are possible health consequences from eating GE food, still largely unstudied and unknown.

Fortunately, GE crops are not permitted in organic food production. For more information about why organic is the right choice, see our Organic Food: Eating with a Conscience Guide and visit the Organic Program page. For more information on the failure of genetically engineered food, read Genetically Engineered Food Failed promises and hazardous outcomes, from the Summer 2011 issue of Pesticides and You, or go to our Genetic Engineering Web page.

For more photos and videos of the event, follow the links below: