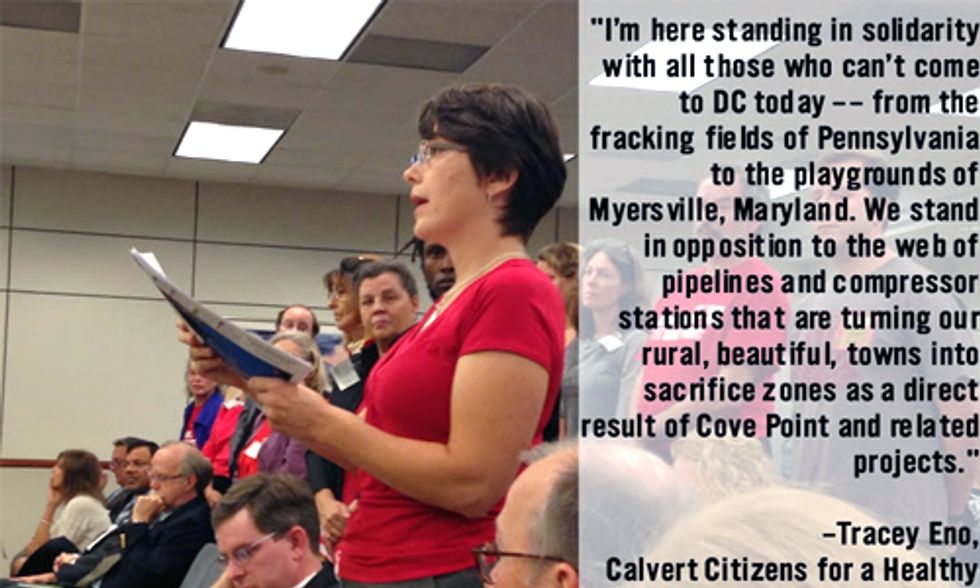 Today, citizens from Calvert County, Maryland, angry that the Federal Energy Regulatory Commission (FERC) commissioners sent stand-ins to a meeting in their area on the controversial proposal to allow the Dominion Cove Point facility to convert from an import to an export terminal for liquified natural gas (LNG), took their case to FERC's monthly meeting in Washington D.C.

A group of 20 people, including members and allies of the Calvert Citizens for a Healthy Community, delivered what they described as “an unannounced intervention" in response to their feeling that the commission intends to rubber stamp the proposal without adequate assessment of the dangers to the surrounding community.

Group leader Tracey Eno delivered a short address and gave FERC a check from the group for $79 to cover the cost of the most up-to-date version of federal fire protection standards. The group says that FERC failed to apply the standards to its Environmental Assessment for Cove Point, showing the extent to which explosion, flammable vapor cloud and other potential disasters at the facility would endanger nearby homes and families.

"Lusby residents were horrified to learn in the draft environmental assessment that FERC applied the 2001 federal fire protection standards," said Eno. "2001 does not adequately address the dangers of LNG export equipment and processes. The 2013 edition is the first to wisely require a quantitative risk assessment to assess the risks to residents offsite."

If approved, Cove Point would be only the second LNG export facility built in the lower 48 states and the only facility ever to have what Eno called "the unique and terrifying distinction" of being built in such a densely populated area so close to so many people's homes. It would ship fracked gas from the Marcellus shale region to other countries.

"Right now, you are in danger of turning my neighborhood into a sacrifice zone for the gas industry—if you approve the Dominion Cove Point LNG export facility without fully studying the hazards of the project," said Eno. "For more than a year, we have been pleading with you to provide the information on the full effects from this proposal in the form of a comprehensive Environmental Impact Statement. Yet, at every turn you have lowered the bar of scrutiny for Dominion, even as the evidence of threats to our communities has continued to rise."

"At least a few of the FERC commissioners in the room should have trouble sleeping tonight," said Ted Glick, national campaign coordinator for the Chesapeake Climate Action Network, who was among the 20 people with Eno. "Tracey spoke truth to power and made the simple point that people's safety should be the first priority for FERC, not the profits of gas industry giants like Dominion."

Watch the video of Eno's speech: