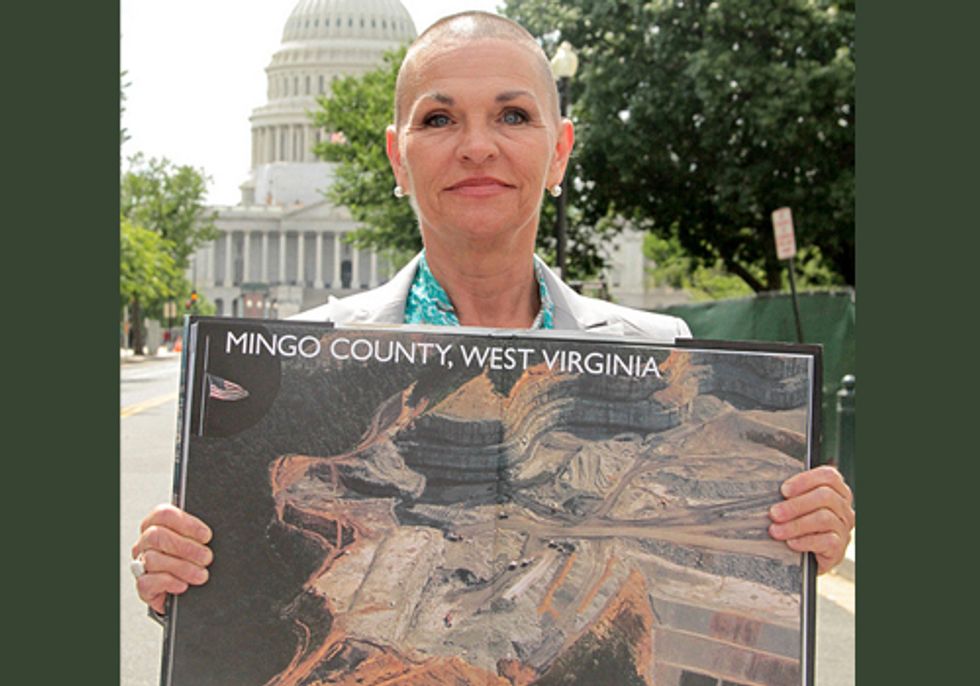 With twenty-one recent studies highlighting the extreme health impacts of mountaintop removal coal mining, citizens from Appalachia are stepping forward to ask Congress to protect their communities and to demand that regulatory agencies enforce the law.

More than 150 citizens with the Alliance for Appalachia are converging on Capitol Hill this week to address the adverse impacts of mountaintop removal coal mining and to highlight Congressional and administrative agency inaction on an issue that studies suggest has caused cancer in 60,000 people. Recent peer-reviewed studies have shown widespread devastating health impacts; citizens near mountaintop removal are 50 percent more likely to die of cancer and 42 percent more likely to be born with birth defects compared with other people in Appalachia.

“We have no choice,” said Jane Branham, who is traveling 8 hours to Washington with Virginia-based group Southern Appalachian Mountain Stewards. “My health is failing, many of our members are elderly, and it is hard for us to come all this away. We should be home taking care of ourselves, but we have come to D.C. to fight for our survival.”

In addition to meetings with government officials, the End Mountaintop Removal Week in Washington will feature a rally on Wed., June 6, at Upper Senate Park on Capitol Hill. Organizers anticipate that thousands of citizens across the U.S. will show their support via local events and online actions.

“I want to make sure that Congress knows what’s going on in Appalachia. They don’t think it’s a problem, but I see first hand what it does to our children, especially our young children and our unborn children,” said Donna Branham of West Virginia, who recently joined other Appalachian women in shaving their heads in an act of mourning and protest against the destruction of the mountains. After years of lobbying for change at the state and local level, she is traveling to Washington, D.C. for the first time to share the impacts in her community. “If they could actually see these waters, see what’s been done to our homes, see the children that are sick and the people that are dying, then maybe they’d be willing to do something about it.”

Passage of the Clean Water Protection Act is one of the group’s main goals. The bill, H.R. 1375, was introduced by Congressmen Frank Pallone of New Jersey and David Reichert of Washington state and currently has 122 co-sponsors. “This bill alleviates the wide array of human and environmental health issues directly correlated with mountaintop removal coal mining by restoring the Clean Water Act to its original intent,” said Congressman Pallone. “By redefining fill material, we’ll be able to keep toxic mining waste out of our nation’s streams.”

The Obama administration has taken a few small steps toward limiting the most extreme forms of mountaintop removal, including the U.S. Environmental Protection Agency’s (EPA) recent appeal of a Federal District Court judge decision to allow a permit for a 2,278-acre mountaintop removal mine that would bury nearly seven miles of streams.

Advocates, however, urge that this action isn’t enough. In addition to the Clean Water Protection Act, which would create permanent protections for streams, citizens are demanding that legal protections be enforced and that a moratorium on mountaintop removal and destructive coal technologies be put in place.

Mountaintop removal coal mining relies on heavy explosives to blast off several hundred feet of mountain to expose coal seams, and has impacted more than 500 mountains in West Virginia, Virginia, Kentucky and Tennessee to date. According to the EPA, the practice has also buried or destroyed more than 2,000 miles of streams in those states.

Appalachian coal-mining regions have traditionally had high rates of unemployment, even prior to the current economic downturn, and the Central Appalachian region contends with some of the highest poverty rates in the country. Ending mountaintop removal could create more jobs in coal in the short term, and open up the possibility for a better economic future. Last month, coal made up only 34 percent of our nation’s energy use, and rising natural gas use has indicated that continued economic dependence on coal is increasingly risky.

“I want West Virginia to be the mountain state—not the extraction state,” said tenth generation West Virginia native Dustin White. “I want to see an Appalachia filled with healthy vibrant communities where people are happy, not living in poverty. I don’t want ghost towns and potholes. Stopping mountaintop removal is the first step to creating a more economically diverse and sustainable Appalachia for our present and future generations.”

The Alliance for Appalachia’s headquarters for the week will be the Lutheran Church of the Reformation, 212 E Capitol St., Washington D.C. On Wednesday, June 6, a Rally and National Day of Action to End Mountaintop Removal took place from 11 to 11:45 a.m. at the Upper Senate Park on New Jersey and Constitution Avenues.