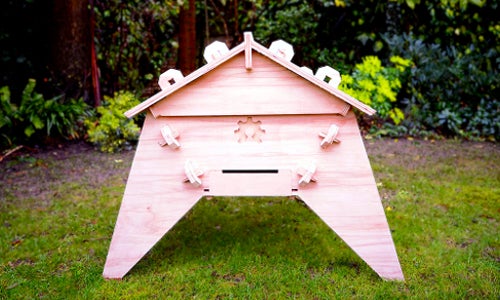 You’ve probably heard that bees—their honey, their awesome pollinating powers and their stingers—are on the decline. It’s a global problem that affects more than just the little yellow and black buzzers; it can and will interrupt the way we produce food if it continues. Bees pollinate most of the crops farmers grow worldwide, so without them, we don’t have food. Most scientists agree that pesticides, drought, habitat loss, pollution and other major environmental concerns are all contributing to colony collapse disorder. It’s a big deal and there are a lot of people working to keep bees buzzing. 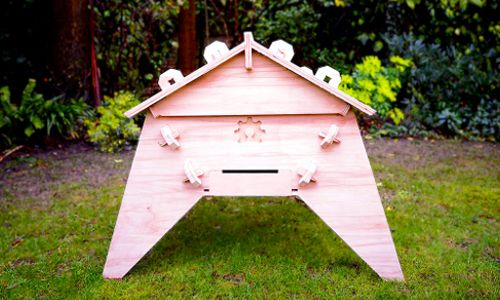 A new project has set out to help understand the issue in individual colonies and bring the problem to the people called Open Source Beehives. This multi-continent partnership between Open Tech Collaborative and Fab Lab Barcelona proposes public participation through easily made backyard hives in conjunction with software that will track hive health.

Individuals can be part of the solution—and the fun—by keeping bees themselves. To construct the hives, keepers don’t need glue or screws, only a 4 foot by 8 foot piece of plywood and a CNC router. Those who aren’t quite as tech savvy with computer controlled saws can buy a prefabricated kit. There are two models: the smaller Colorado Top Bar (pictured) and the multi-tiered Barcelona Warre. They are easily shipped due to their flat design and packaging.

These “smart hives” will be connected to Smart Citizen through a piece of hardware installed within the hives. Users can view data online as well as through a mobile app. Information such as CO levels, humidity, bee count, noise intensity and more will be sent via Wi-Fi. An upcoming feature will notify beekeepers when there is something amiss within their hive.

The partnership is an open source project, meant to be shared and improved upon through community. Web programmers can find the code for the monitoring software on GibHub, the world’s largest code sharing site. Those with other talents and knowledge are also encouraged to help with the project. To contribute, visit Open Source Beehives’ collaboration page.

The partnership is finding that many citizens want to participate. Tristan Copley Smith, co-founder and communications director of Open Source Beehives, said, “What we find very interesting is the difference between the public and the political appetite for action on the bee issue—and other ecological issues. Citizens understand the urgency, and are supporting our project, building hives, and helping us improve. Political actors on the other hand have yet to take any meaningful steps on the issue. Citizen science projects in general are giving the public avenues to participate in solving issues themselves, rather than sitting around waiting for solutions from the dysfunctional and corrupt bureaucracies that are failing to protect our planet.” You can help by reminding your local government officials how important the issue of colony collapse disorder is and urging them to get involved.

The project has already hosted a successful IndeGoGo campaign to fund the creation of their open source sensor pack and intends to also conduct a Kickstarter campaign in the future.

Correction: The previous byline listed was inaccurate. The byline has been updated.