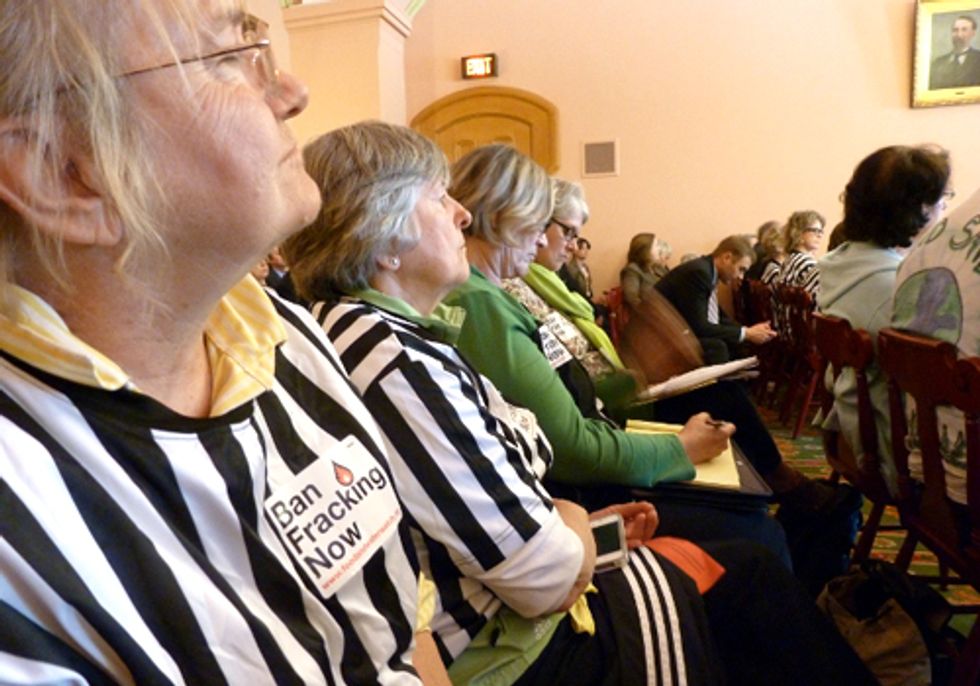 Frustrated after several months of deliberate stonewalling of six bills to slow or halt fracking and deep waste injection, students, farmers, small business owners and community members ensured their presence was felt as the bills were given their first ever introductory hearing at the Ohio Statehouse on April 18. Activists believe the delay on hearings of these bills is directly linked with the $2.8 million the Gas Industry has poured into the Ohio Legislature, including $213,000 in campaign contributions allotted to Gov. John Kasich. Hearing rumors that the Agriculture and Natural Resources Committee Chair had no intention of allowing further hearings or opportunities for public comment, activists—many dressed in referee jerseys—packed the hearing room to call foul on the the gas industry’s corruption of the legislative process.

“I came here today to hold our representatives accountable to the people they’re supposed to represent," said local small business owner Jennie Scheinbach. "A majority of Ohioans want to see a halt to fracking until it can be proven to be safe. The frackers have a lot of money, but we have truth and people power on our side. I’m hoping that will prevail today.”

Fracking is quickly becoming a top tier issue for Ohioans due to growing concern over the local environmental and health impacts. Two hundred marched against the industry’s first Ohio conference in Youngstown last November. More than three hundred rallied on the steps of the Statehouse in January calling for a halt to fracking and waste injection throughout the state. Activists have even been arrested in recent months for disrupting industry operations in efforts to protect impacted communities.

In what activists deemed to be an effort to quell resistance, the Ohio House pushed back the hearings of the six bills for hours until many activists could no longer stay. Although originally notified the bills would receive a first hearing between 3 and 5 p.m., hearing attendees were informed only at 4 p.m. that the bills would not be heard until 7 p.m.

“As a student at Ohio State, I felt called to participate in this action," said OSU junior, Adrian Jusdanis. "Just as the administration at Ohio State isn’t honoring the voices of students in their decision to frack on university land, our representatives aren’t honoring the voices of distressed citizens across Ohio. They demonstrated their preference for the gas industry today in further delaying the hearing on bills that would slow or put a halt to toxic fracking operations in our state," he said.

Undeterred by the further delay, about a dozen remained at the Statehouse ensuring the voices of concerned Ohioans were represented. The growing collective power brought by students, farmers and community members will be showcased this summer in a mobilization called Don’t Frack Ohio. A coalition of Ohio grassroots groups, environmental and progressive organizations, national movement leaders and concerned citizens are calling for the largest mobilization against fracking in the country’s history to take place in Columbus from June 14-17. Details of the June mobilization against fracking can be viewed by clicking here.