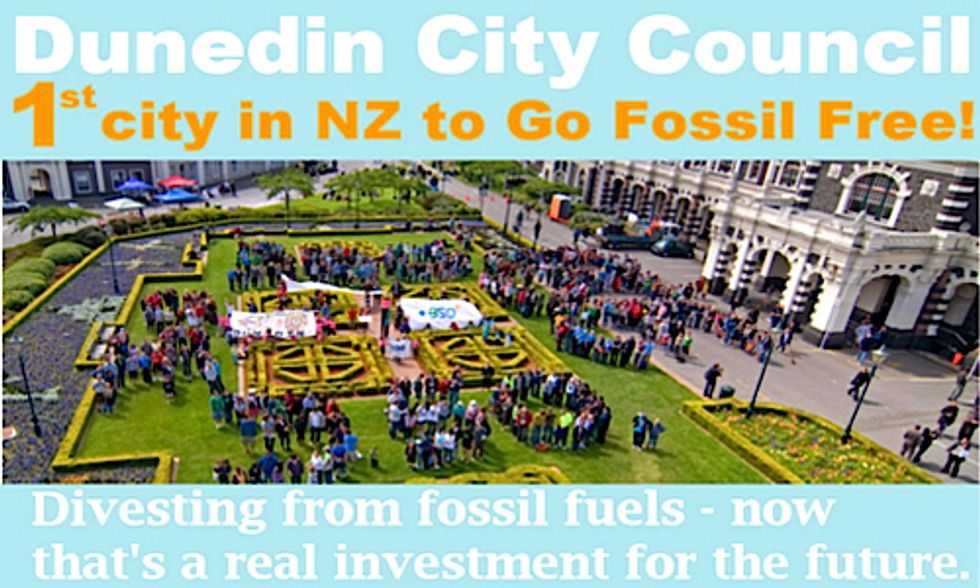 Dunedin is closer to Antarctica than it is to the U.S., but this city in New Zealand today joined 23 U.S. cities and one Dutch town by announcing that it will divest from fossil fuels.

This move by the council comes at a time when the conservative New Zealand Government, led by Prime Minister John Key, has been pushing desperate plans to expand fossil fuel extraction across New Zealand. Yet this vote, along with the divestment announcements last September by five Anglican Dioceses in New Zealand, and the months of campaigning to halt the Denniston Coal Mine and offshore oil drilling reflect a growing disquiet with the government’s fossil fuel plans.

In recent months the Australian owned bank, Westpac, has also come under pressure to take steps to divest. Climate campaigning groups 350 Aotearoa—the New Zealand arm of 350.org—and Coal Action Network Aotearoa, are specifically calling on Westpac to halt its funding of Bathhurst Resources, whose planned coal mining project on the Denniston Plateau and surrounds would be one of the largest new contributors to carbon dioxide (CO2) emissions from New Zealand.

“It’s time for Westpac to front up and take responsibility for the impacts of their financing, like Dunedin has today,” said 350 Aotearoa National Coordinator Ashlee Gross. “Financing oil, coal and gas companies is playing a major role in determining whether these companies go ahead with plans that would push us well past safe CO2 levels, or whether we start to get serious about the transition to clean energy.”

The Dunedin city council's ethical investment policy will formally exclude the munitions, tobacco, fossil fuel extraction, gambling and pornography industries from its investment portfolio. With an investment policy like that, it sure makes living in Dunedin more tempting.