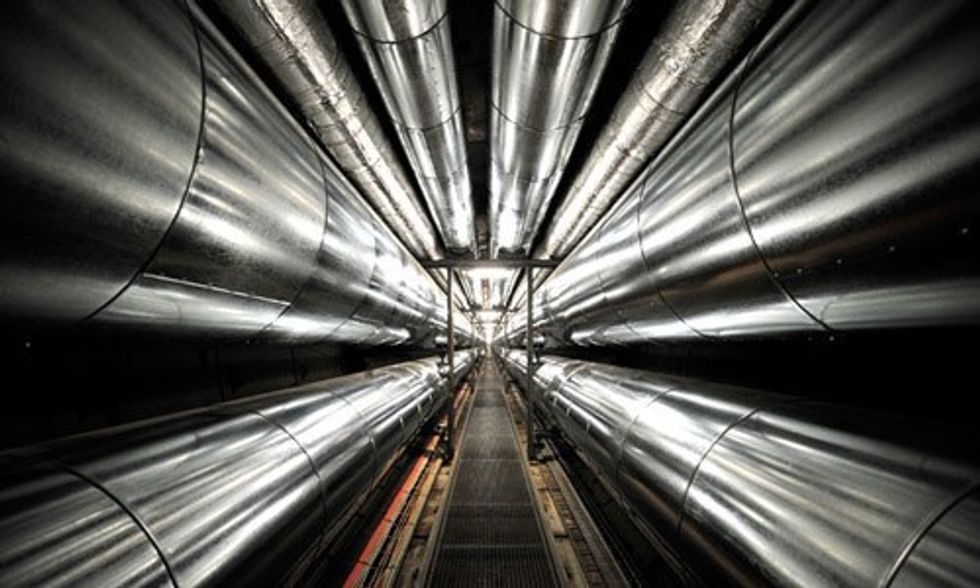 Companies are tapping into cities' underground networks of steam pipes as a source of clean energy.

"Green steam," as it's called, "recaptures and reuses thermal energy previously lost to the environment, utilizing advanced cogeneration technology," according to Paris-based Veolia, which operates a dozen of these networks in North American cities including Boston, Philadelphia, Baltimore and Montreal.

This is an underground heat pipe network in Copenhagen, where 98 percent of the city's buildings utilize district energy. Denmark is increasingly integrating renewables, such as solar farms, into its district energy systems. Photo credit: Bill Ebbesen / Wikipedia

District energy, piping steam or water to a circuit of buildings for heating and cooling, is already widely used in many cities, according to National Geographic. There are more than 700 of these subterranean systems in the U.S. alone. But the source of that energy has often come from coal- or oil-fired power plants. "Now many old systems are getting retrofits to deliver green steam generated with cleaner fuels and recovered waste heat," National Geographic explained.

Take Veolia. They spent $112 million to upgrade the gas-fired Kendall Station power plant in Cambridge, Massachusetts in 2013. The plant captures waste heat that was going into the Charles River and instead funnels it into a 7,000-foot pipeline to heat and cool buildings in Boston and Cambridge. According to the company, 70 percent of Boston’s high-rise buildings are served by the green steam.

The company claims their green steam system has reduced the region's annual greenhouse gas emissions by 475,000 tons, the equivalent of taking 80,000 cars off the road every year.

“These legacy urban networks that were built back in the day by the utilities have become, fundamentally, portals for sustainable energy,” Bill DiCroce, who leads commercial and municipal business for Veolia, told National Geographic.

Other systems "use tree trimmings, household waste and other biomass to generate electricity, capturing the surplus heat in the process and delivering it to customers," National Geographic explained.

For businesses, it often makes economical sense to tap into this energy source. “It’s a lot cheaper” to buy energy from that system “than it is for me to actually have to maintain a piece of equipment that would heat enough water or steam to keep these buildings going,” Chris Sherman, Boston's Faneuil Hall marketplace operations manager, said.

In Minnesota, District Energy St. Paul, which heats 80 percent of buildings in downtown St. Paul, is greening its operations too. In October 2015, they announced plans to end the use of coal by 2021. They said this will reduce carbon dioxide emissions by 27 percent or 21,000 tons. They already utilize renewable energy sources, such as waste heat from biomass-fired combined heat and power and North America’s largest solar hot water system, but plan to increase their renewable sources as they phase out coal completely.

And using district energy to increase energy efficiency and renewables is even more popular outside of North America. A UN report last year identified 45 "champion cities," such as Copenhagen, Oslo and Tokyo, which used district energy to cut primary energy use 30 to 50 percent.

Copenhagen stood out in particular. Ninety-eight percent of the city’s buildings utilize district energy, and the city is working on converting all remaining coal-fired combined heat and power systems to biomass, according to the International District Energy Association.

Rob Thornton, president and CEO of the International District Energy Association, told National Geographic that cooling projects are getting “dramatic investment” in the Middle East, while Denmark and other countries are integrating solar farms to heat water for distribution.

There have been issues with leaks and explosions in some cities, but Veolia said they're rare. Some utilities, such as District Energy St. Paul, converted their systems to water to avoid the problems of steam explosions.

Still, "district energy has been slower to take off in North America because it’s driven mainly by private investment," Pernille Overbye, managing director of Canadian district energy at Ramboll, told National Geographic. But that may be changing. The U.S. Department of Energy has started supporting more district energy with a technical assistance program and possible loan guarantees.