Cities Prove to Be Vital Voice at Paris Climate Talks 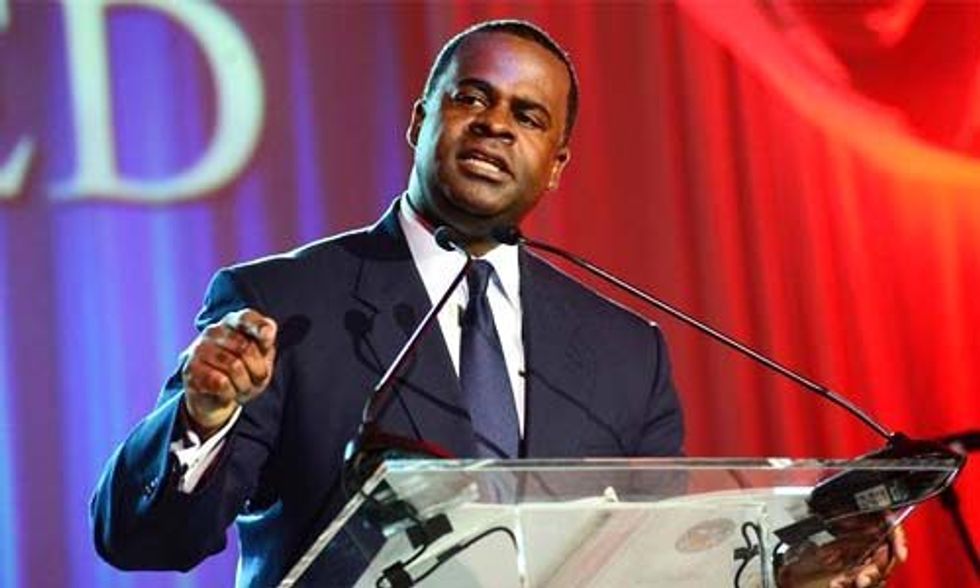 Ecological activism has been a way of life for myself and my family as a native Atlantan. I inherited a passion for environmental stewardship from my dad which has been passed down to my children. Together, we've remained committed to protecting our planet and the local Atlanta community through the years.

This is why I'm proud of the vital work the city of Atlanta is doing to tackle climate change. Our mayor, Kasim Reed, was one of several U.S. mayors that stepped up as a key advocate for climate change action at the COP21, 2015 Paris climate conference.

Mayor Kasim Reed emerged as a critical voice at the Paris talks as Atlanta is one of the top-tier sustainable cities in the U.S. Photo credit: Atlanta Business Chronicle

I was in Paris with my dad and son, John R., to attend events held in tandem with the international talks. I was inspired to see the world's leading mayors playing such a pivotal role at the conference. Cities are vitally important to the success of this agreement.

The activities of cities alone account for more than 70 percent of energy-related carbon dioxide emissions. Roughly 54 percent of the world's 7.3 billion people currently live in cities and by 2050, that number is expected to rise to around 70 percent of the world's population. If the world is to avoid catastrophic climate change, we need our cities to continue to lead by developing and implementing concrete initiatives that improve the health, well-being and economic opportunities of citizens.

At the conference, leading mayors shared examples of how innovative, local solutions are playing a critical role in addressing these challenges. Mayor Reed emerged as a critical voice at the Paris talks as Atlanta is one of the top-tier sustainable cities in the U.S.

“This is the most important set of meetings on climate action since the Kyoto Protocol," Mayor Reed said in an interview with Bloomberg during the Paris climate talks (see below). “I felt that it was important as one of the leading cities in America and the leading city in the Southeast, to be a part of this conversation."

Mayor Reed is not only considered among the leading city executives in the U.S. on sustainability, but he's catapulted Atlanta to an international stage as an exemplary city tackling climate change. Some of Atlanta's key sustainability initiatives include: a project to increase the city's reserve water supply by turning the Bellwood Quarry into a reservoir; the Solar Atlanta initiative that will install solar panels on 28 fire stations and recreation centers while aiming to reduce energy usage at city buildings; and The Atlanta Beltline, a cornerstone sustainability initiative that's setting a national standard for transformative investment, sustainable growth and equitable development. Atlanta is also one of the leading metropolitan markets for electric vehicle sales, thanks to favorable income-tax credits.

The city of Atlanta's local solutions under Mayor Reed's leadership are a reminder that transitioning to a clean energy economy will not only enhance the quality of life for citizens, but put us on a path to prosperity by driving economic growth for decades, creating well-paying jobs and increasing household incomes. According to researchers, the cost of not acting on climate change could be $44 trillion dollars by 2060.

Mayor Reed participated in a number of panel discussions with world leaders during the climate talks, including a “Buildings Day" session focused on ways to reduce the energy consumption and carbon footprint from commercial buildings. He discussed Atlanta's national leadership in the Better Buildings Challenge, a public-private partnership to reduce energy and water consumption by 20 percent by the year 2020. Atlanta leads the nation with more than 100 million square feet of commercial building space committed to the challenge.

Mayor Reed and fellow U.S. mayors also joined the Climate Summit for Local Leaders, hosted by Michael Bloomberg and Paris Mayor Anne Hidalgo. The goal of the summit was to ensure that the voices of local leaders were heard and city efforts around the world were recognized. During his address, French President Francois Hollande admitted that even with a global agreement, “National governments can provide funding, but increasingly cities and regions will be the key player." Mayor Reed also participated in a session, Cities and Regions, Leading from the Front with Equity and Inclusion, to share opportunities and challenges of leading equitable and inclusive climate and clean energy policies.

Outside of the Atlanta community, there are inspiring initiatives happening across the world that give me great hope. To highlight a few, the city of Boston was recently recognized in Paris at the C40 Cities Awards as a climate leader for its work on Greenovate Boston. And Oakland's mayor, Libby Schaaf, took part in the climate talks to highlight the significant climate action change taking place in Oakland.

Cities are showing the world that by working together, we can transition to a clean energy economy while averting the most devastating effects of global warming, improving the health of citizens and redefining the economy of the 21st century.

Germany's Superhighway for Bikes Could Take 50,000 Cars Off the Road Every Day