Billions of Cicadas May Soon Be Coming to Trees Near You 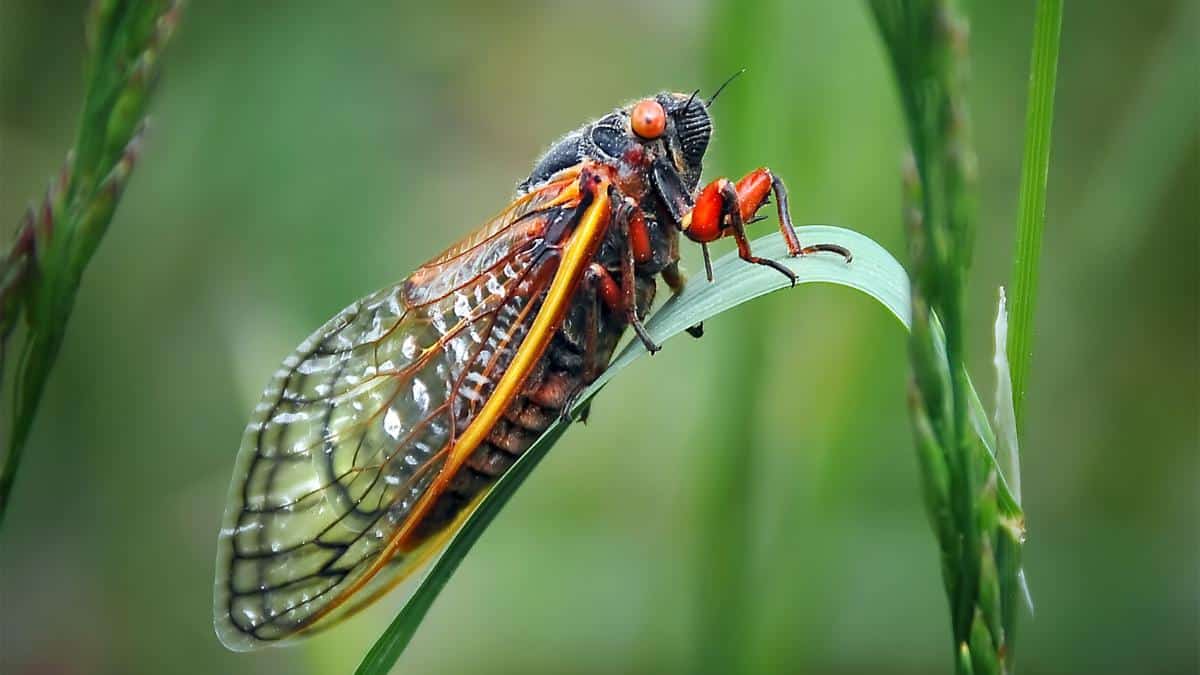 One of the largest broods of 17-year cicadas will emerge from underground in a dozen states this spring. WerksMedia / Getty Images

By John Cooley and Chris Simon

A big event in the insect world is approaching. Starting sometime in April or May, depending on latitude, one of the largest broods of 17-year cicadas will emerge from underground in a dozen states, from New York west to Illinois and south into northern Georgia. This group is known as Brood X, as in the Roman numeral for 10.

For about four weeks, wooded and suburban areas will ring with cicadas’ whistling and buzzing mating calls. After mating, each female will lay hundreds of eggs in pencil-sized tree branches.

Then the adult cicadas will die. Once the eggs hatch, new cicada nymphs fall from the trees and burrow back underground, starting the cycle again.

There are perhaps 3,000 to 4,000 species of cicadas around the world, but the 13- and 17-year periodical cicadas of the eastern U.S. appear to be unique in combining long juvenile development times with synchronized, mass adult emergences.

These events raise many questions for entomologists and the public alike. What do cicadas do underground for 13 or 17 years? What do they eat? Why are their life cycles so long? Why are they synchronized? And is climate change affecting this wonder of the insect world?

We study periodical cicadas to understand questions about biodiversity, biogeography, behavior and ecology – the evolution, natural history and geographic distribution of life. We’ve learned many surprising things about these insects: For example, they can travel through time by changing their life cycles in four-year increments. It’s no accident that the scientific name for periodical 13- and 17-year cicadas is Magicicada, shortened from “magic cicada.”

As species, periodical cicadas are older than the forests that they inhabit. Molecular analysis has shown that about 4 million years ago, the ancestor of the current Magicicada species split into two lineages. Some 1.5 million years later, one of those lineages split again. The resulting three lineages are the basis of the modern periodical cicada species groups, Decim, Cassini and Decula.

Early American colonists first encountered periodical cicadas in Massachusetts. The sudden appearance of so many insects reminded them of biblical plagues of locusts, which are a type of grasshopper. That’s how the name “locust” became incorrectly associated with cicadas in North America.

During the 19th century, notable entomologists such as Benjamin Walsh, C.V. Riley and Charles Marlatt worked out the astonishing biology of periodical cicadas. They established that unlike locusts or other grasshoppers, cicadas don’t chew leaves, decimate crops or fly in swarms.

Instead, these insects spend most of their lives out of sight, growing underground and feeding on plant roots as they pass through five juvenile stages. Their synchronized emergences are predictable, occurring on a clockwork schedule of 17 years in the North and 13 years in the South and Mississippi Valley. There are multiple, regional year classes, known as broods. 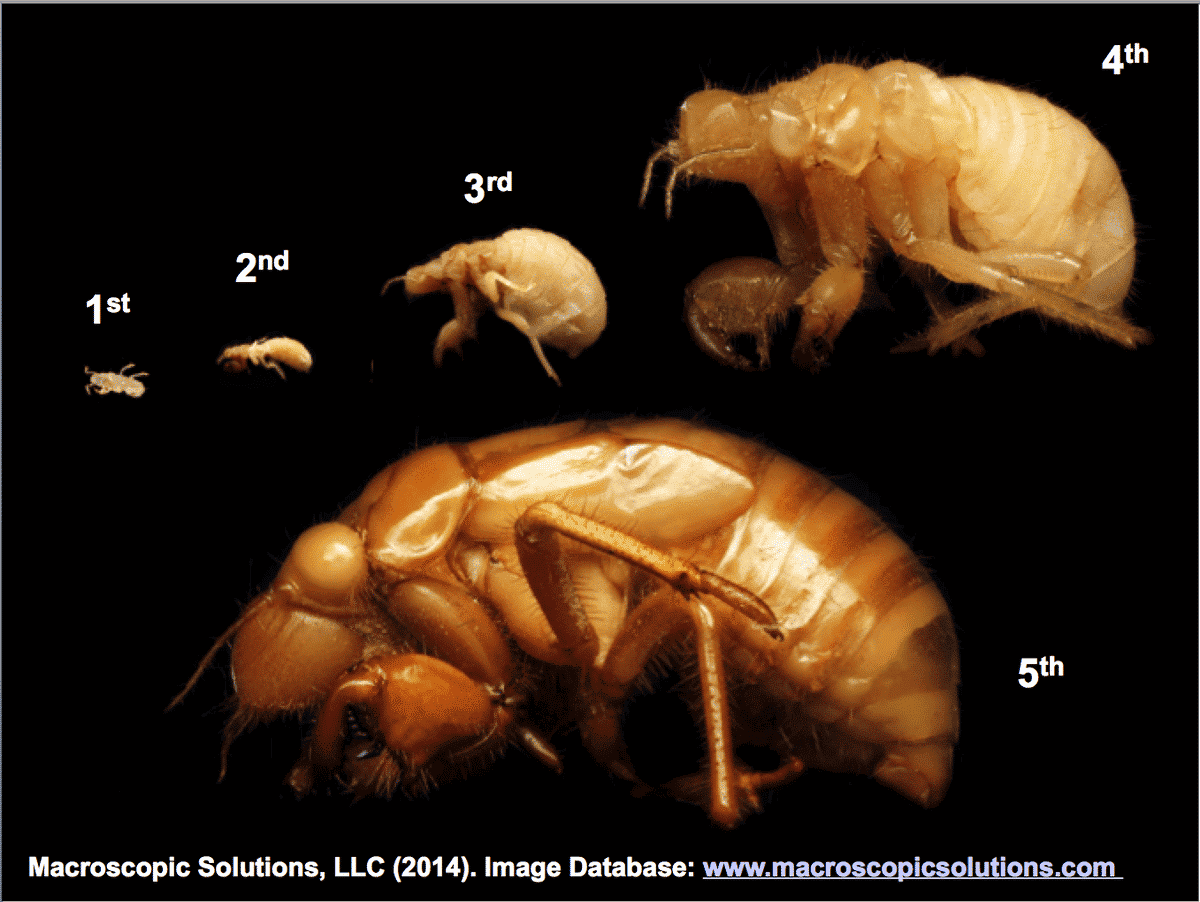 The five stages of the periodical cicada underground juveniles. Between each stage the juvenile cicada molts so that it can become larger. Actual size of the fifth-stage nymph is 0.83 inches. Chris Simon / CC BY-ND

The key feature of Magicicada biology is that these insects emerge in huge numbers. This increases their chances of accomplishing their key mission aboveground: finding mates.

Dense emergences also provide what scientists call a predator-satiation defense. Any predator that feeds on cicadas, whether it’s a fox, squirrel, bat or bird, will eat its fill long before it consumes all of the insects in the area, leaving many survivors behind.

While periodical cicadas largely come out on schedule every 17 or 13 years, often a small group emerges four years early or late. Early-emerging cicadas may be faster-growing individuals who had access to abundant food, and the laggards may be individuals that subsisted with less.

If growing conditions change over time, having the ability to make this kind of life cycle switch and come out either four years early in favorable times or four years late in more difficult times becomes important. If a sudden warm or cold phase causes a large number of cicadas to make a one-time mistake and come out off-schedule by four years, the insects can emerge in sufficient numbers to satiate predators and shift to a new schedule. 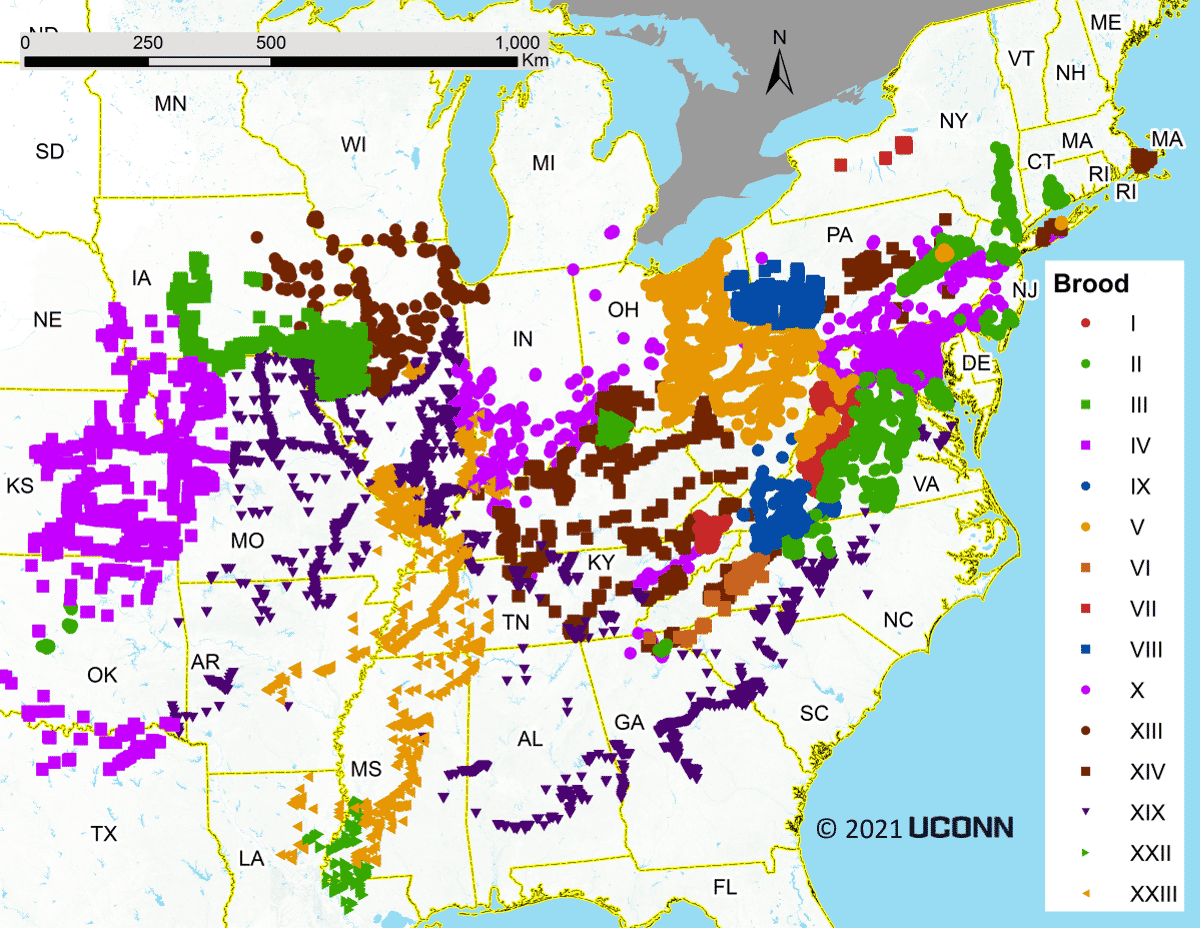 Broods of periodical cicadas, identified by Roman numerals, emerge on 13- or 17-year cycles across the eastern and midwestern U.S. University of Connecticut / CC BY-ND

As glaciers retreated from what is now the U.S. some 10,000 to 20,000 years ago, periodical cicadas filled eastern forests. Temporary life cycle switching has formed a complex mosaic of broods.

Today there are 12 broods of 17-year periodical cicadas in northeastern deciduous forests, where trees drop leaves in winter. These groups are numbered sequentially and fit together like a giant jigsaw puzzle. In the Southeast and the Mississippi Valley there are three broods of 13-year cicadas.

Because periodical cicadas are sensitive to climate, the patterns of their broods and species reflect climatic shifts. For example, genetic and other data from our work indicate that the 13-year species Magicicada neotredecim, which is found in the upper Mississippi Valley, formed shortly after the last glaciation. As the environment warmed, 17-year cicadas in the area emerged successively, generation after generation, after 13 years underground until they were permanently shifted to a 13-year cycle. 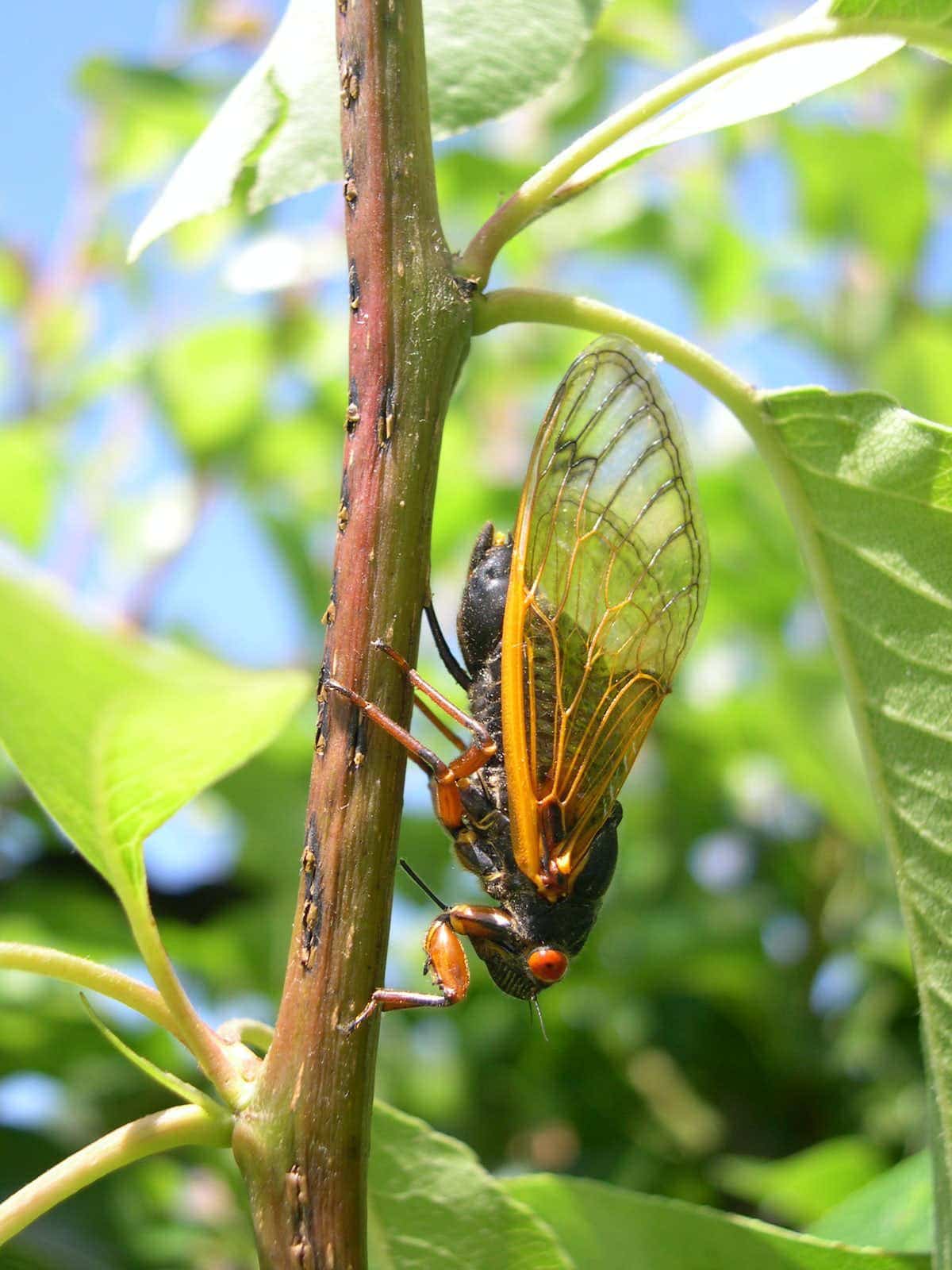 But it’s not clear whether cicadas can continue to evolve as quickly as humans alter their environment. Although periodical cicadas prefer forest edges and thrive in suburban areas, they cannot survive deforestation or reproduce in areas without trees.

Indeed, some broods have already become extinct. In the late 19th century, one brood (XXI) disappeared from north Florida and Georgia. Another (XI) has been extinct in northeast Connecticut since around 1954, and a third (VII) in upstate New York has shrunk from eight counties to one since mapping first began in the mid-1800s.

Climate change could also have far-reaching effects. As the U.S. climate warms, longer growing seasons may provide a larger food supply. This may eventually change more 17-year cicadas into 13-year cicadas, just as past warming altered Magicicada neotredecim. Large-scale early emergences occurred in 2017 in Cincinnati and the Baltimore-Washington metro area, and in 1969, 2003 and 2020 in the Chicago metro area – potential harbingers of this kind of change.

Researchers need detailed high-quality information to track cicada distributions over time. Citizen scientists play a key role in this effort because periodical cicada populations are so large and their adult emergences only last a few weeks.

Volunteers who want to help document Brood X’s emergence this spring can download the Cicada Safari mobile phone app, provide snapshots and follow our research in real time online at www.cicadas.uconn.edu. Don’t miss out – the next opportunity won’t come until Broods XIII and XIX emerge in 2024.

John Cooley is an Assistant Professor of Ecology and Evolutionary Biology, University of Connecticut.

Chris Simon is a Professor of Ecology and Evolutionary Biology, University of Connecticut.