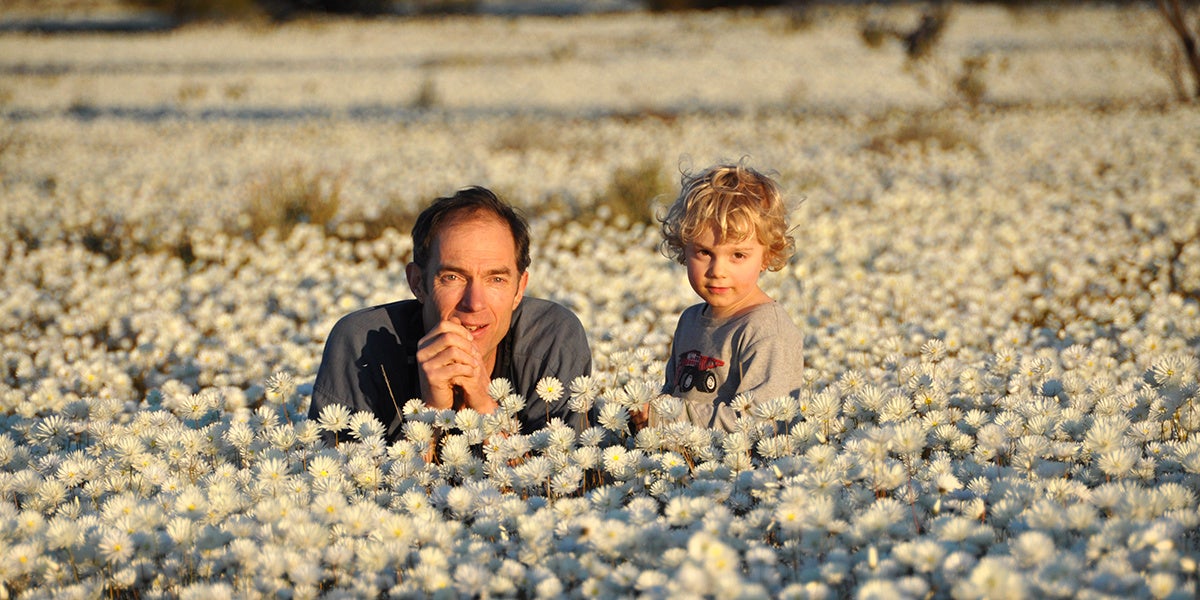 But Darwin—the great-great-grandson of naturalist Charles Darwin, whose theory of evolution changed human history—brims with optimism that humanity “can turn our society around on a dime.”

“We need a Nelson Mandela. We need a Gandhi,” said Chris Darwin, in his home near Sydney, Australia. “Somebody who is going to go, ‘Right, okay, we have a got a serious problem in the next 30 years. Let’s turn the ship round.'”

Despite his concerted conservation efforts, Darwin, a warm and charming 57-year-old, is too humble to believe it will be him at the wheel.

Darwin has spent his life building nature reserves and fighting the extinction of species, since making a 180-degree turn-around from a previous life as an advertising executive, after attempting suicide after his 30th birthday. Today, he runs the Darwin Challenge app, which allows people to count their meat-free days and visualizes the effect on the environment and their bodies.

He’s hoping to inspire the leaders in the next generation, who could ride to the rescue and do his part to save animals from extinction until then.

Matthew Ponsford: You say we are, right now, living through a massive moment in human history.

Chris Darwin: What’s happening at the moment in the natural world, on planet Earth, is that we’ve had five mass extinction periods in the last four billion years of life on Earth. The most famous one is the one 65 million years ago when the dinosaurs died out—which is ironic because all the indications are is that we’re in the middle of the sixth great mass extinction period on planet Earth, now. It’s a big event. And you speak to the average person in the street, and they have no idea this is going on.

MP: What is causing this?

And in the oceans, it’s overfishing. Overfishing is caused by the fishing industry, which is providing food for humans but also for other fish because we feed a lot of fish to fish in aquaculture.

When you put both of those two things together, the greatest cause of the decline of the natural world is the meat industry, providing meat to humans.

MP: Can we change the situation while still eating meat? Or is vegetarianism, or veganism, the only answer?

But in answer to your question, do we all need to become vegetarians and vegans? No, I think if we all had four meat-free days a week and three meat days, with reasonable portions, that would certainly stop habitat destruction.

MP: What’s the most startling, striking fact that you’ve learned about meat production?

MP: Is animal welfare connected to this extinction surge?

CD: When I started on this, I just did not know what was happening behind closed doors in these factory farms. It’s a complete irony that there is one set of rules for what you can do for a pig, and there’s an entirely different set of rules of what you can do to a dog or a cat. I mean you’re not allowed to string a line of dogs up by their feet and slit their throats and let them bleed out. And you couldn’t do that to a cat, you couldn’t do it to a hamster, but you’re allowed to do it to a chicken.

The other thing is the livestock industry basically sucks the world’s grain away from the hungry. Basically, chickens are in direct competition with the world’s starving children. The irony is that chickens are winning. I’m sure if you put a picture up on a wall of who is more important, the chicken of some beautiful little baby, most people would say, “Well, the baby surely is more important than the chicken.”

But actually, the market is doing the reverse: the chicken’s actually got buying power. The beautiful starving child does not have buying power in Africa or many parts of Asia. I’m sure future generations will look back on us, and just shake their heads. Just like we look back on people overlooking slavery, and say, “What were they thinking?” They’ll look back on us and just go, “Eight hundred million people?” Millions of children die every year of starvation. (3.1 million children according to the World Food Programme.)

MP: In your work, you try to show the positives and what can be achieved. Should we be approaching this question of extinction with optimism about what can be done?

CD: Absolutely, we could stop this tomorrow. All we need is a great leader. I’ve studied four great paradigm shifts in history – the abolition of the slave trade, the emancipation of women, the Copernicus, Galileo one where people realized that the planet wasn’t flat and it was round, and the final one was Charles Darwin one. All four of those great paradigm shifts did not occur due to the government, they did not occur due to companies. They occurred because visionary people came out and inspired people, inspired the masses actually. Generally, it goes the visionary, the masses, corporations, government.

Governments are always last. Should we be expecting more from the government? No, you shouldn’t expect anything from a democratic government. Have a look what they’ve achieved in the last 30 years on climate change—it’s just completely pathetic.

MP: Some environmentalists say the big elephant in the room is overpopulation.

I’m feeling pretty bad because I’ve got three kids. David Attenborough’s very big on this and said, “How many children have you got?” I said, “Three,” and he said, “Oh, you can’t campaign on that one then can you.” He’s been campaigning for years on this and he’s very eloquent on it. Remember, that he rightfully says a lot of it is about women’s education because, generally, if you educate women to have a life beyond raising children, they will have fewer children, so that’s very big. But even so, you look at America, a very fast rate of rising population in America, quite surprising for the western world.

MP: Is that because people worry about discussing it?

CD: Well, I think it’s because humans are a swirling mass of hot emotion covered by a thin veneer of logic.

We’ve only just come out of a cave really. We were never programmed to run a planet. We were never programmed to think about even our entire global population. We’re not designed for the role that we find ourselves in, and so it’s not surprising we’re not really doing it very well. A little intelligence is dangerous, and we’ve got just enough intelligence to get ourselves into trouble but not enough to get ourselves out so far.

MP: What’s your greatest fear about humanity’s future on Earth?

CD: As if there might some I haven’t mentioned! Oh, dear. What is my greatest fear? Well, because I’ve got three kids … have you got kids?

CD: Look, I mean when you have kids it really changes the way you view everything. I suppose it’s one of the wonderful things about life is how you feel about your children. Even when you read the books it’s such a powerful feeling, a sense of love and concern and everything else.

When you do that—which is what I’ve done—the line is pretty terrifying. If we went in a straight line from where we are today, my kids would have a hard time and their grandchildren would just be a mess.

Should we be looking for another planet? Well, even if we knew of another habitable planet, we do not have a transport system for transporting billions of humans around, so it would be irrelevant really. We’re actually stuck here. This is it, for the next bit.

MP: You’ve spoken publicly about the difficult time in your life before you attempted suicide.

CD: I think suicide is one of the extraordinary aspects of the modern world. I just think it’s important to talk about because it’s a bit of a taboo topic. What changed? Everything changed. I view this stage of my life as a bonus that I shouldn’t really have. I really should have died, I was so close to dying, so it was a series of very fortunate things.

MP: You said in the past that being Charles Darwin’s descendant could be a little tricky, a little tiresome.

CD: I think there was a time when we all sort of yawned, turning up to another film set with another guy wearing a beard saying he was Charles Darwin, and another documentary.

But it was so fantastic that my mother did take us to all those things because a lot sunk in. My sister has become a conservation person and she does some great work, and I’m doing the best I can. Charles Darwin, of course, totally, totally inspired me because he said, “I feel no remorse for having committed any great sin, but I have often, and often regretted that I haven’t done more direct good for our fellow creatures.” So, you could say I’m in the family business and I’m enjoying it very much.