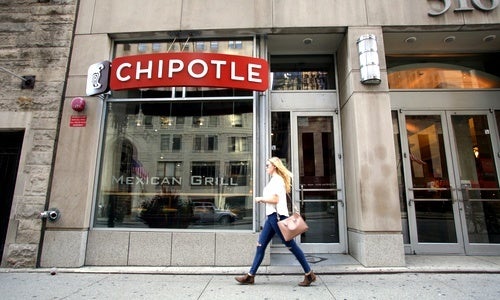 Chipotle announced Sunday that it was closing 43 of its restaurants in Washington and Oregon amid an E. coli outbreak that appears to be linked to the fast casual restaurant chain. The company and health officials are currently investigating the reported outbreak.

“After being notified by health department officials in the Seattle and Portland areas that they were investigating approximately 20 cases of E. coli, including people who ate at six of our restaurants in those areas, we immediately closed all of our restaurants in the area out of an abundance of caution,” Chipotle told Reuters.

Eight people have been hospitalized, but no deaths have been reported from the outbreak, according to the Associated Press. “The company has not made plans to close any other restaurants in other states as there is no evidence of a link to other restaurants,” said company spokesperson Chris Arnold.

The number of cases within Oregon and Washington could increase, though. “After people started hearing about the outbreak, more people will probably go to the doctor and join the list of potential cases,” Marisa D’Angeli, medical epidemiologist with the Washington State Department of Health, told the Associated Press.

This is the third such incidence of food contamination at Chipotle restaurants since August.

Minnesota health officials in September said tomatoes used in 22 of Chipotle’s restaurants infected dozens of patrons the month before with salmonella, including some who were hospitalized, largely in the Minneapolis-St. Paul area. The company has since switched tomato suppliers.

Public health officials in Simi Valley, California, in August confirmed that the contagious norovirus was the reason about 80 customers reported feeling ill after eating at a local Chipotle restaurant.

Earlier this year, Chipotle pulled pork or “carnitas” from many of its menus, due to an issue with one of their supplier’s animal welfare practices. Many criticized the company for it so-called “pork problem,” but Coach Mark Smallwood at Rodale Institute argued Chipotle didn’t have a “pork problem“—just high ethical standards. He applauded them “for not compromising their principles, and for pushing production to be more humane.”

Chipotle is known for its high standards for fresh, healthy and humanely sourced food. Their “food with integrity” principles mean they strive to use organic and local as much as possible. They serve more local produce than any restaurant in the U.S., according to their website, and they aim to serve only pasture-raised meat from animals raised without non-therapeutic antibiotics and synthetic hormones.

And in April, Chipotle became the first fast food chain to attempt to eliminate genetically modified organisms (GMO) from its food. Critics have been quick to point out that Chipotle is not completely GMO-free, however. While its meat and dairy products come from animals that are not genetically modified, they are still being given GMO-feed. And its beverages also contain genetically modified ingredients, including those containing corn syrup made from GMO corn.

But its “super fresh cred” also makes the company vulnerable to food contamination in a globalized and industrialized food system. “There is a growing trend among restaurants, as with Chipotle, to use more fresh, unprocessed food,” says Reuters. “While that may be good for nutrition, experts say it raises the risk of foodborne illness because cooking kills pathogens that cause illness.”

Reuters claims foodborne contamination at restaurants happens “infrequently.” But the Center for Disease Control and Prevention’s (CDC) estimates of foodborne illness in the U.S. would probably alarm most. “Each year roughly one in six Americans (or 48 million people) get sick, 128,000 are hospitalized and 3,000 die of foodborne diseases,” says the CDC.

And a separate recall from the U.S. Department of Agriculture (USDA) on Friday of more than 167,000 pounds of ground beef shows that food contamination continues to plague the U.S. food system. The contaminated meat, which tested positive for E. coli, is from All American Meats in Omaha, Nebraska. “There have been no confirmed reports of adverse reactions due to consumption of these products,” according to the USDA.