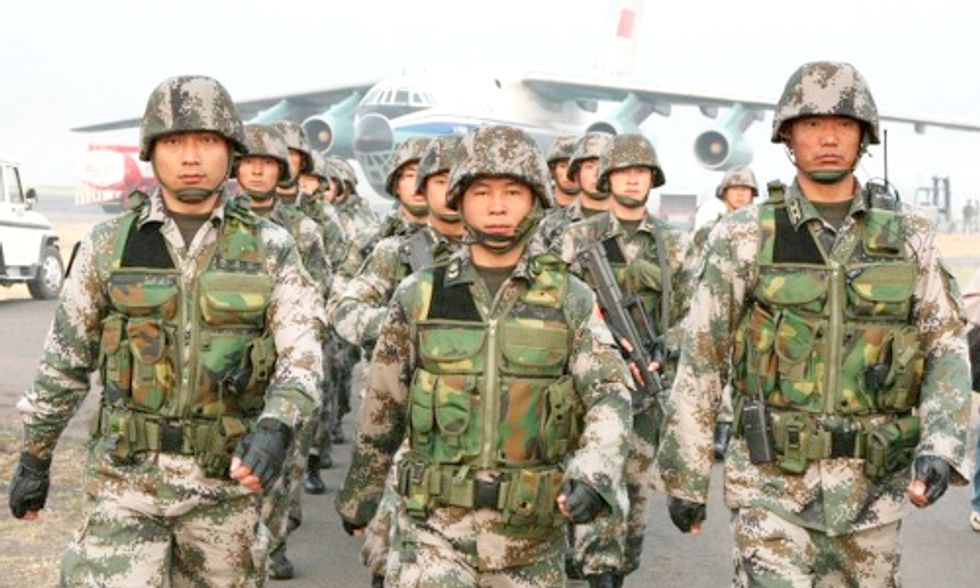 China's military is the world's largest with nearly 2.3 million in personnel, and it has announced one of the largest decisions of any armed forces when it comes to genetically modified organisms (GMOs).

The Chinese army this month began ordering all military supply stations to only allow the purchase of non-GMO grain and food, oil due to health and safety concerns regarding GMOs, according to Food Democracy Now! The decision is viewed as an important step toward the government's anticipated ban on the import of all GMO grains and oilseeds within the next two years.

In 2013, China began rejecting shipments of corn made with GMOs.

Some believe the Chinese army is setting a good example for the rest of the nation. Photo credit: Food Democracy Now!

"The army has established [an] excellent model for people of the whole nation: No GMO staple food and GMO food oil should enter the army food supply,” said Chen Yiwen, an advisor to the China Disaster Prevention Association's Committee of Disaster History.

Food Democracy Now! Founder and Executive Director applauded the Chinese army's decision, but lamented the fact that such action has yet to be taken in the U.S.

“It’s about time that government officials took a proactive step to protect their citizens against the increasing rates of pesticide residue as result of the over application of roundup on GMO crops," Murphy said. "The remarkable fact is that it’s China and not America."

Murphy added that it could have a big impact on Monsanto's future.

"This could be the nail in the coffin for Monsanto," he said. "Rejection of Monsanto’s flagship product, genetically engineered Roundup Ready soybeans, by China is a pretty damning market based decision by the most populous nation on the planet.

“The question is, what does the Chinese military know about GMOs and the negative impact of Roundup that the U.S. government is not telling us?”

According to Mi Zhen-yu, a former vice president of the China Academy of Military Science doctoral tutor and lieutenant general, China imported more than 63 million tons of GM soybeans from the U.S. and other countries last year. The country's imported GM soybeans, used to extract the soybean food oil that dominates China's food oil market, including much of the restaurant industry.

"The glyphosate residue contained in GM soybean food oil [and GM soybean protein powder processed from GM soybean cake, a by-product of GM soybean food oil] eaten three meals a day, continuously penetrates the bodies of most Chinese, including children at kindergarden, primary school and middle school, university students and teachers, staff members and soldiers of the Chinese army, government staff members and other consumers," Zhen-yu wrote in an April paper entitled, We Must Face the harm caused by imported GM Soybeans to 1.3 billion Chinese People.

"During the past 20 years, the health level of the Chinese people has rapidly deteriorated with various diseases rapidly increasing. The situation is shocking."

Millions to 'March Against Monsanto' on May 24