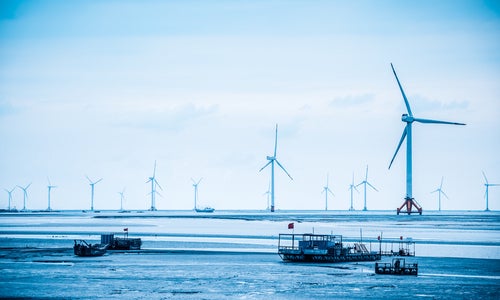 In China, wind power is leaving nuclear behind. Electricity output from China’s wind farms exceeded that from its nuclear plants for the first time in 2012, by a narrow margin. Then in 2013, wind pulled away—outdoing nuclear by 22 percent.

The 135 terawatt-hours of Chinese wind-generated electricity in 2013 would be nearly enough to power New York State. 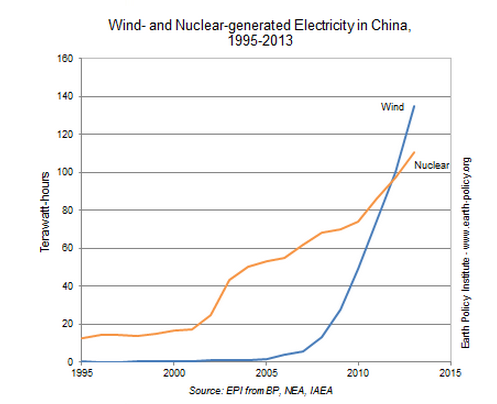 Once China’s Renewable Energy Law established the development framework for renewables in 2005, the stage was set for wind’s exponential growth. Wind generating capacity more than doubled each year from 2006 to 2009 and has since increased by nearly 40 percent annually, to reach 91 gigawatts by the end of 2013 (1 gigawatt = 1,000 megawatts). Over 80 percent of this world-leading wind capacity is now feeding electricity to the grid.

Wind generation in 2013 could have been even higher, by an estimated 10 percent, but for the problem known as curtailment—when wind turbines are stopped because the grid cannot handle any more electricity. To help reduce curtailment and reach the official 2020 goal of 200 grid-connected gigawatts, China is building the world’s largest ultra-high-voltage transmission system. The raft of projects now under construction will connect the windier north and west to population centers in the central and eastern provinces.

One of the reasons why nuclear power has not kept up with wind in China is the relative time it takes to get a project up and running. Whereas the typical Chinese nuclear reactor takes roughly six years to build, a wind farm can be completed in a matter of months.

Another factor was the interruption of China’s nuclear expansion after the 2011 disaster in Fukushima, Japan. The government suspended new reactor approvals until late 2012 and reviewed the safety of both operational and under-construction reactors over several months. Officials also deferred until at least 2015 plans for reactors in non-coastal provinces, where water needed for cooling is highly polluted and in increasingly short supply.

If all 28 gigawatts of nuclear capacity now under construction are completed by 2020, China will have reached 45 gigawatts—22 percent shy of the official capacity target of 58 gigawatts. Some of the more-advanced reactors now being built are seeing cost overruns and schedule delays of a year or more, so the nuclear fleet in 2020 may be even further from the official goal.

Despite its impressive recent growth, wind power still provides less than 3 percent of China’s electricity, well behind hydropower (which typically makes up about 17 percent) and coal, the leading electricity source (at more than 75 percent). But as wind power opens up an even greater lead over nuclear, it is showing the potential to emerge as the safe, scalable, water-sparing backbone of a low-carbon Chinese energy economy.