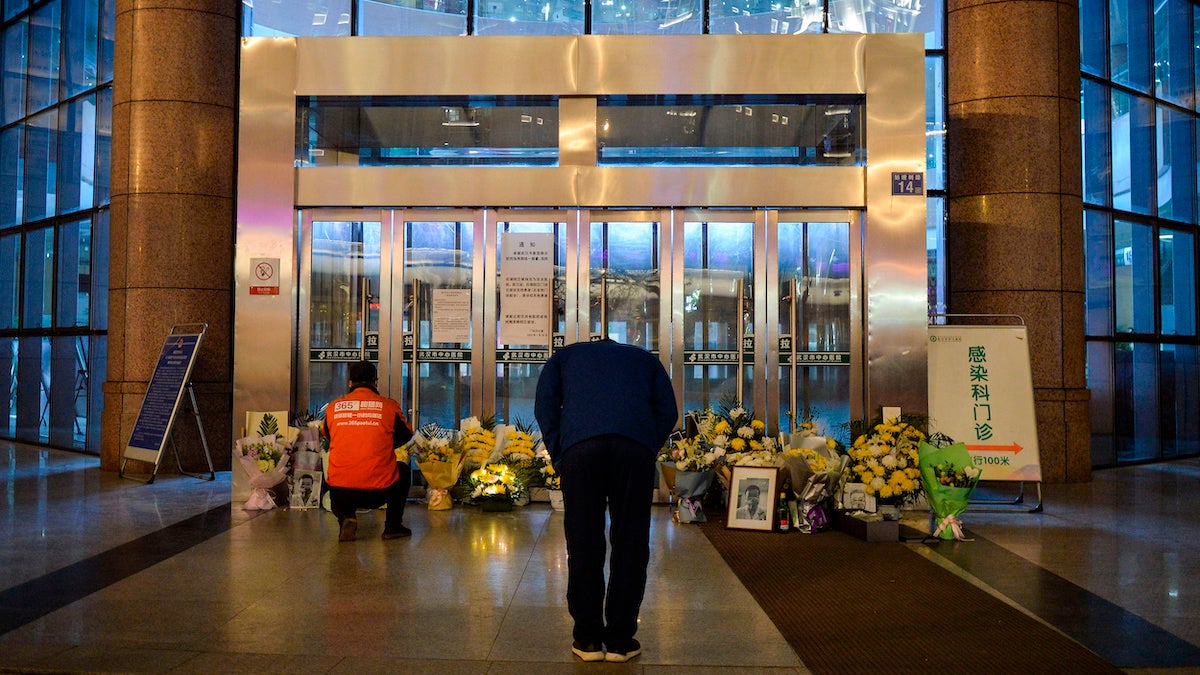 A man bows in front of flowers and a photo of the late ophthalmologist Li Wenliang outside the Houhu Branch of Wuhan Central Hospital in China's central Hubei province on Feb. 7, 2020. Li, a doctor who was punished for raising the alarm about the new coronavirus, died on Feb. 7 after being infected by the pathogen. STR / AFP via Getty Images

Officials in China have revised the total death toll from the novel coronavirus in Wuhan, the city where the infectious disease was first reported. The new numbers that China released Friday increase the number of COVID-19 deaths by 1,290, or a 50 percent increase, as CNN reported.

They also added 325 infections to the city’s tally of positive cases, bringing the official number to 50,333, with 3,869 deaths. The previous reported death toll for Wuhan was 2,579, according to CNN.

That pushes China’s national total up to 4,600 deaths. China has confirmed nearly 84,000 coronavirus infections, the seventh-highest globally, according to Johns Hopkins University data, as the BBC reported.

Officials in Wuhan said the newly released numbers now include those who died at home during the beginning of the outbreak, as well as deaths that had not been properly reported by hospitals or registered on death certificates, according to The New York Times.

However, those numbers seem circumspect to the international community, which has accused China of downplaying the severity of the outbreak. China, however, insists it has not covered anything up and has touted the efficacy of its restrictive lockdowns in Wuhan, which lasted for months and have only recently eased, according to the BBC. On Friday, China reported 26 new infections, the lowest daily number in more than two weeks, according to The Guardian.

China’s handling and reporting of the outbreak has drawn the ire of several prominent political leaders around the world. Dominic Raab, Britain’s foreign secretary, told Reuters on Thursday that China would have to answer “hard questions” after the crisis about how the pandemic came about and how it could have been stopped earlier. President Emmanuel Macron of France told The Financial Times that “there are clearly things that have happened that we don’t know about,” as The New York Times reported.

On Thursday, however, China’s President Xi Jinpeng responded to some of the criticism, particularly from President Donald Trump who had recently accused China of not sharing data in a timely fashion. Xi, in a phone call with Russian President Vladimir Putin, called such accusations counterproductive, as The Guardian reported. Putin agreed.

Xi said politicizing the pandemic was “detrimental to international cooperation,” according to state-run news agency Xinhua, The Guardian reported. According to the agency, Putin said “attempts by some people to smear China” were “unacceptable.”

Of course, the latest change in numbers to the official death toll could renew skepticism about China’s openness. Officials said that the figures had been revised to show “accountability to history, to the people and the victims,” as well as to ensure “open and transparent disclosure of information and data accuracy,” as CNN reported.

The way China counted coronavirus infections actually changed three times in January and February, leading to confusion about what exactly was happening in Wuhan. One area of criticism has been the reluctance to count people who tested positive but were asymptomatic, making it impossible to compare the number of infections with international data, according to CNN.

As the BBC reported, China reported the cases to the World Health Organization on Dec. 31, but WHO experts were only allowed to visit China and first investigate the outbreak on Feb. 10, when China had more than 40,000 cases.