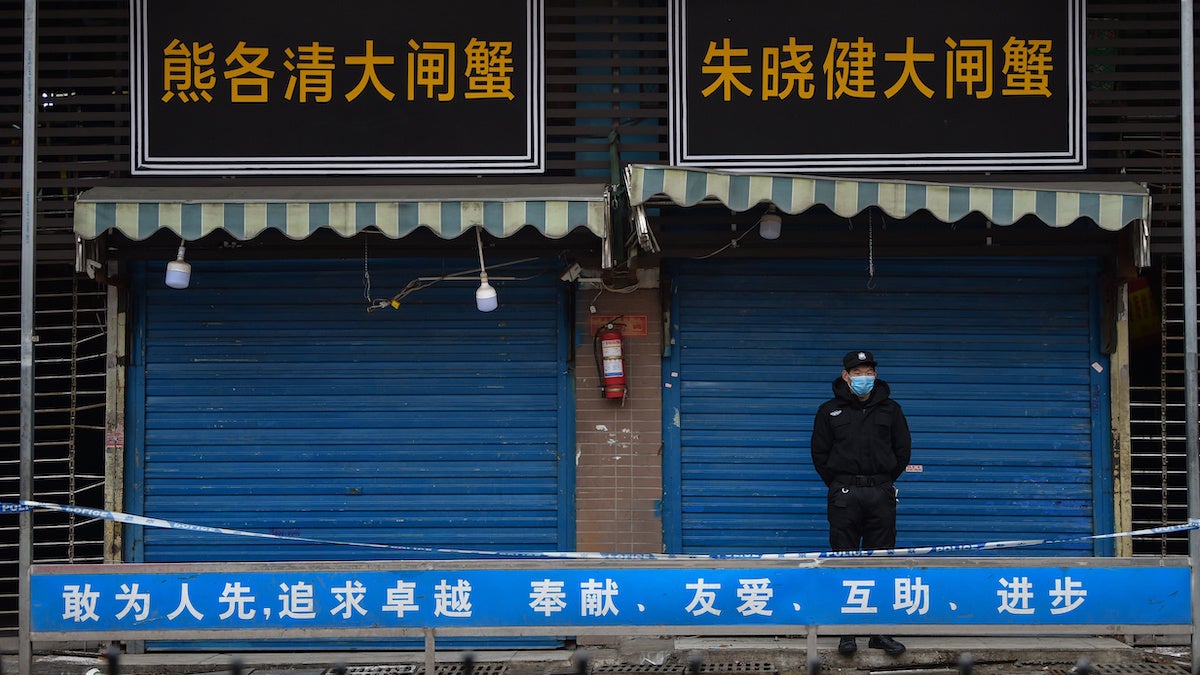 The seafood market in Wuhan, China that has been linked to the spread of the new coronavirus. HECTOR RETAMAL / AFP via Getty Images

China banned its trade in wild animals Sunday until the new coronavirus, which was linked to a market in Wuhan where wildlife was sold, is eradicated. Now, conservationists are calling on the country to make the ban permanent.

The move comes 17 years after severe acute respiratory syndrome (SARS) killed more than 750 people in China and around the world. That disease is believed to have spread to humans from masked palm civets and was linked to a market in China’s Guangdong province. China temporarily cracked down on the wildlife trade in the immediate aftermath, but then allowed it to flourish again.

The new coronavirus has been traced to the Wuhan Huanan Seafood Wholesale market. While the 1,000-stall market, which has been shuttered since Jan. 1, mostly sold seafood, wild animals were also on offer. One vendor, Dazhong Livestock and Game, offered a menu of more than 100 wild animals including ostriches, baby deer, baby crocodiles, wolves and hedgehogs, The Wall Street Journal reported.

In the wake of the latest outbreak, which has so far sickened more than 2,700 people and killed at least 80, China also faced rare internal public calls to ban the sale of wild meat.

“If China doesn’t take action on this now, I fear this is just going to happen again,” Zhou Jinfeng, head of the nongovernmental China Biodiversity Conservation and Green Development Foundation, told The Wall Street Journal.

A group of 19 researchers from the Chinese Academy of Sciences, the Wuhan Institute of Virology and top universities in the country also called on the government to crack down on the wildlife markets last week, The Independent reported.

Nineteen academicians and scholars jointly have called for the eradication of illegal consumption and trading of wild animals and the control of a major public health crisis https://t.co/BAAPrx2NwW #CoronaOutbreak

Scientists don’t yet know exactly how the coronavirus spread to humans, but it is similar to a virus found in bats, and experts think it passed from the bats to another animal, The Wall Street Journal explained. SARS also originally came from bats before passing to civets.

“This is absolutely déjà vu all over again from SARS,” EcoHealth Alliance President Peter Daszak told The Wall Street Journal.

The wildlife trade doesn’t just harm humans. It also threatens endangered species with extinction, according to The Independent. And China isn’t the only country where it takes place.

The Wildlife Conservation Society called for an end to wildlife markets everywhere.

“If these markets persist, and human consumption of illegal and unregulated wildlife persists, then the public will continue to face heightened risks from emerging new viruses, potentially more lethal and the source of future pandemic spread,” the executive director of the group’s health program Christian Walzer told The Independent. “These are perfect laboratories for creating opportunities for these viruses to emerge.”