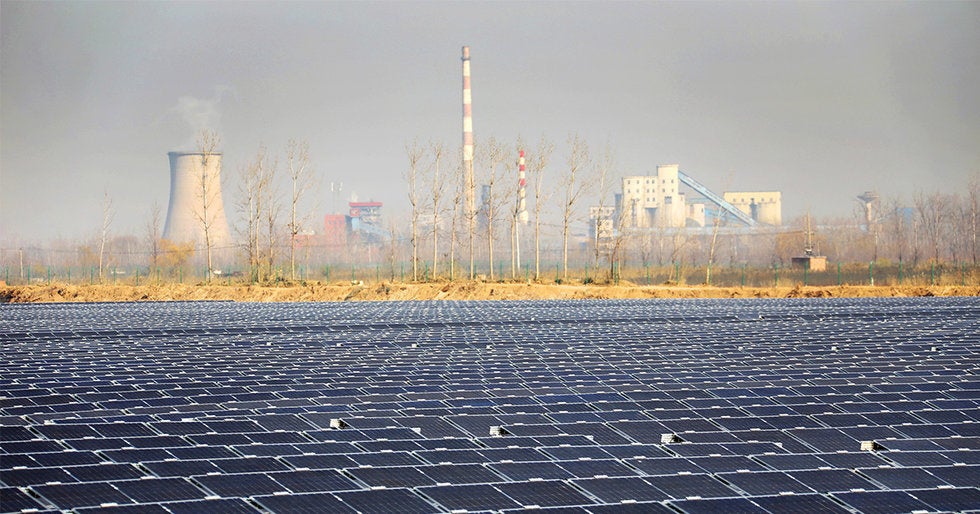 A solar plant above a pond at the mining subsidence area in Liuqiao Town in Huaibei, Anhui Province of China on Dec. 11, 2017. VCG / VCG via Getty Images

China is leading the way on renewable energy, having installed half the world’s solar panels in 2017. But its transformative economic growth fueled by coal and other fossil fuels and its outsized manufacturing sector have coughed up so much air pollution that it has blocked adequate sunlight from reaching its solar panels, according to a new study published this week in Nature Energy.

The researchers behind the study analyzed incoming sunlight at 119 different points around China from 1960 to 2015. They found that sunlight dimmed over the 55-year span and that average solar generation declined 11 to 15 percent during that time. If China could clean up its air enough to revert back to the air quality it had in 1960, it could yield a 12 to 13 percent increase in electricity production and save billions each year. The study projects that cleaner air would save to billion in 2030, according to CNET.

In economic terms, that 11 to 15 percent decline in solar output cost China the equivalent of .9 billion in 2016, which is enough to have powered 1.3 million homes in the U.S. for one year, as Interesting Engineering reported.

“There is a direct energy-related benefit of cleaner air,” Bart Sweerts, the energy researcher at ETH Zürich who led the study, told Earther. “As such, this study provides a supporting argument for the primary driver behind air pollution control measures: reducing the detrimental effects on health.”

As if the gnarly images of dimmed skies, smog so thick it’s impossible to see the skyline, and people walking around in face masks were not enough, the statistics behind the health effects of air pollution are enough to justify strict emissions regulations and a push towards renewable energy. Nearly 38 percent of Chinese citizens, or 532 million people, are breathing appallingly polluted air daily, which accounts for nearly 750,000 premature deaths each year, as Interesting Engineering reported.

The benefits cleaner air would offer to the economy and the solar industry are an ‘energy boost,’ but pale in comparison to a healthier citizenry, said Sweerts, as Earther reported.

Also, the energy boost varied depending on where the solar panels were. The five most polluted provinces actually saw potential energy generation declines of 20 to 28 percent. These areas included industrial centers in the east, but also some high-elevation areas in the west where a small amount of air pollution has a big impact, as ArsTechnica reported.

For a country set on energy independence and unfettered economic growth, cleaning up its air would have the win-win effect of healthier air that saves lives and improved solar panel efficiency that saves money.