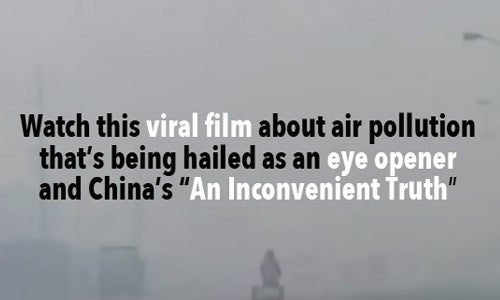 Under the Dome, a documentary about China’s massive air pollution problem, has been viewed more than 200 million times since it was released last Saturday. It’s being hailed as China’s “An Inconvenient Truth” and an eye opener for the Chinese public by Ma Jun, the director of the Beijing-based Institute of Public and Environmental Affairs. 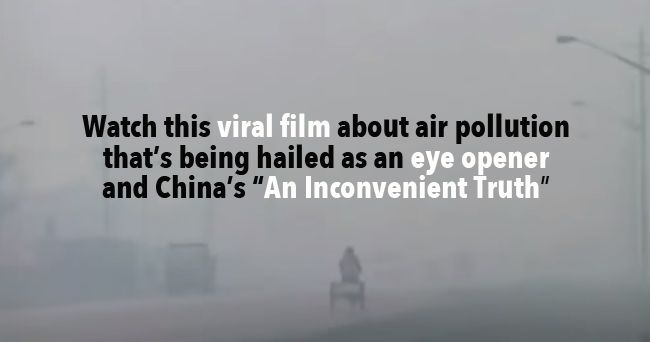 The documentary, which has a similar presentation style to An Inconvenient Truth, was made by Chai Jing, an investigative reporter and anchor at state broadcaster China Central Television. Last year, she left her job to take care of her daughter, who was successfully treated for a benign tumor.

In the 104-minute film, Chai describes how difficult it has been to tell her daughter she can’t play outside. “In Beijing in 2014, I could only take her out when the air was good,” she says during a presentation to a studio audience, which appears in the documentary. “There were 175 polluted days last year. That means that for half of the year, I had no choice but to keep her at home, shut in like a prisoner.”

Chai used $160,000 of her own money and one year to make the documentary, according to NPR. She investigates the science, economics and politics behind the smog, meeting with local officials and visiting London and Los Angeles to see how those cities have dealt with pollution. Chai admits that until recently, she didn’t know the difference between fog and smog.

Ma Jun of the Institute of Public and Environmental Affairs explains to NPR why China’s government has not silenced Chai, and China’s new environment minister even called to thank her: “One reason such a hard-hitting film, that touched on deeply rooted problems, was allowed to be widely disseminated is its positive direction, which gives people hope and confidence.”

Still, much needs to be done. Last year only eight of 74 Chinese cities met the air quality targets—only five more than in 2013, according to NPR.

Watch this documentary that has captivated China: