China Is Showing the World What Renewable Energy Dominance Looks Like 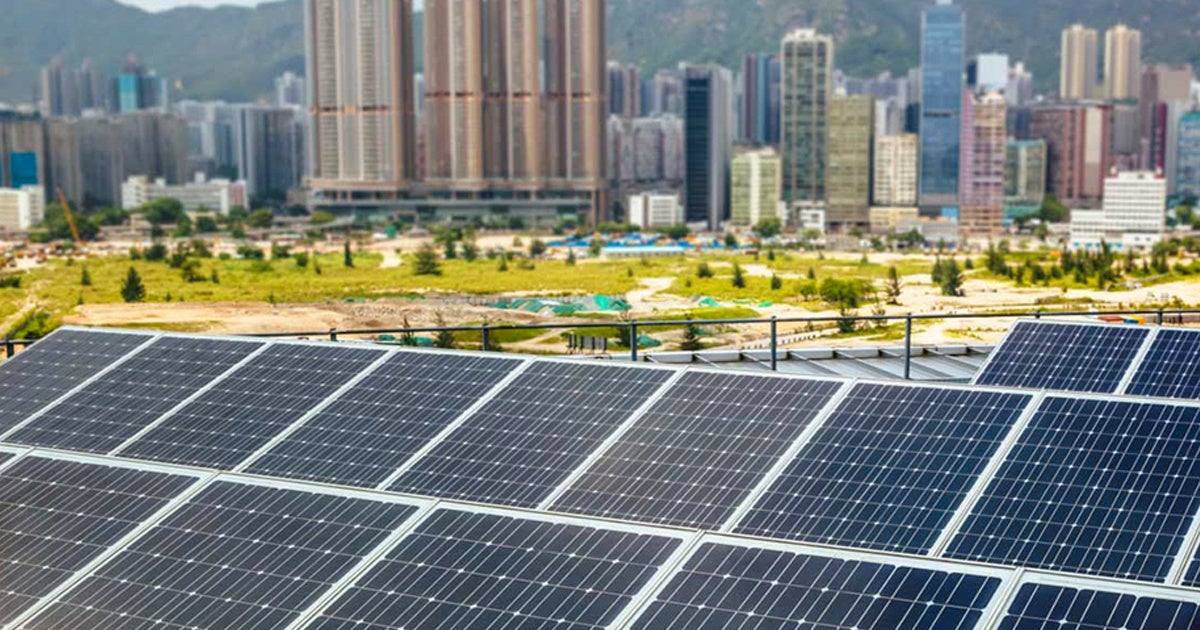 The growth of solar energy continues to outpace forecasts and this growth, according to a report published Wednesday by the International Energy Agency, (IEA) “is a China story.”

While China today is far and away the global leader in solar generation, a decade ago, the country had just 100 megawatts of solar photovoltaic (PV) capacity installed. That’s nothing. For reference, it’s actually less than is currently installed in the city of San Antonio. By the end of 2016, China had increased its solar PV capacity by nearly 800 times, with more than 77 gigawatts currently installed.

China’s solar dominance is only going to keep growing, according to the IEA report. As Dr. Paolo Frankl, one of the lead authors on the report, said on a call to reporters, “In one year, China will install the equivalent of the total history of solar development in Germany.”

The stunning growth trajectories reflected in the IEA report show how quickly the transition to renewables can be underway when aggressive policies cut through the barriers to growth.

The Renewables 2017 report takes a deep dive into renewable energy deployment across all industries and throughout the world, but the dominance of solar PV stands out. As a whole, renewables represented nearly two-thirds of new electricity capacity additions last year, far outshining coal and natural gas growth. For the very first time, solar PV additions grew faster than any other resource, surpassing coal growth. 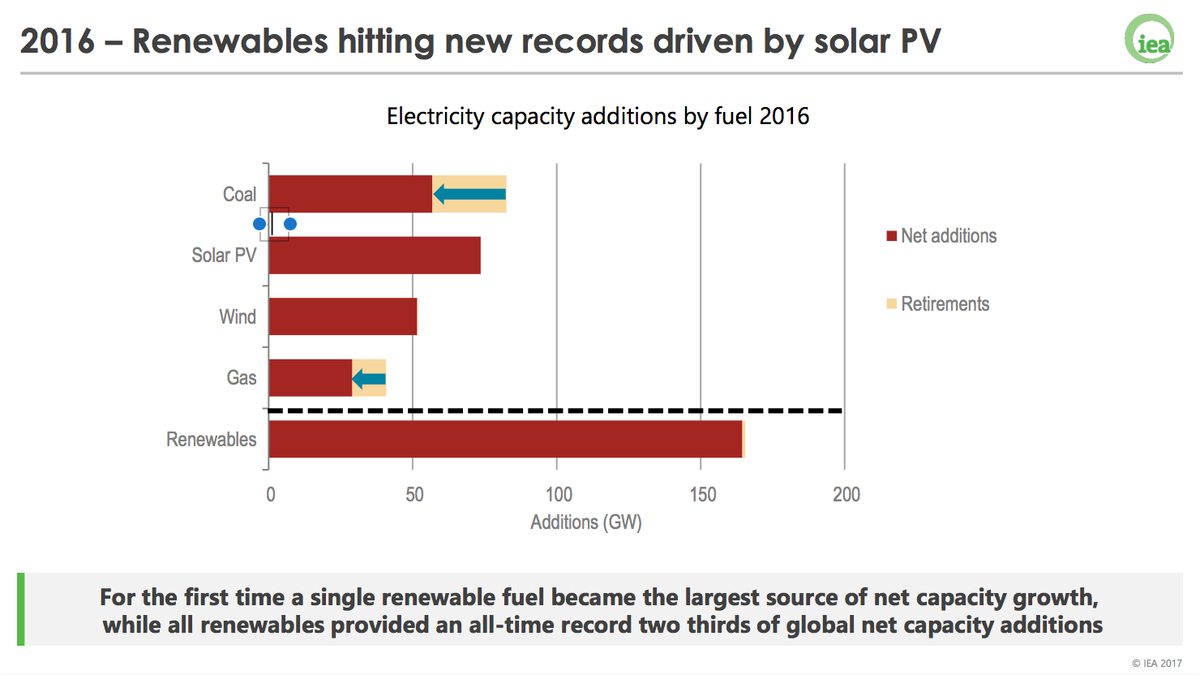 Put simply: The world is now building more solar than coal generation, a trend that looks to continue, regardless of any uncertainty in current American energy policy. Most new demand for electricity is being supplied by renewable resources, with solar providing the most.

“The star is really becoming solar PV, which becomes the leader in renewable growth,” said Frankl.

The report forecasts out the next five years of renewable energy growth, a short time-frame that is easier to project than some forecasts—like, say, the Energy Information Agency—that are routinely criticized. Over the next five years, the IEA anticipates renewables growing by roughly 1,000 gigawatts. “That is half of the total capacity of coal fired power plants worldwide,” said Frankl, “and it has taken 80 years to build all of those.”

Did you get that? Over the next half decade, the world will install half as much renewable energy as the current entire global capacity of coal power.

As China is proving, there is a dramatic shift in how emerging economies are powering their development. From the report:

Along with new policies that spur competition in several other countries, this Chinese dynamic has led to record-low announced prices of solar PV and onshore wind, which are now comparable or even lower than new-built fossil fuel alternatives. 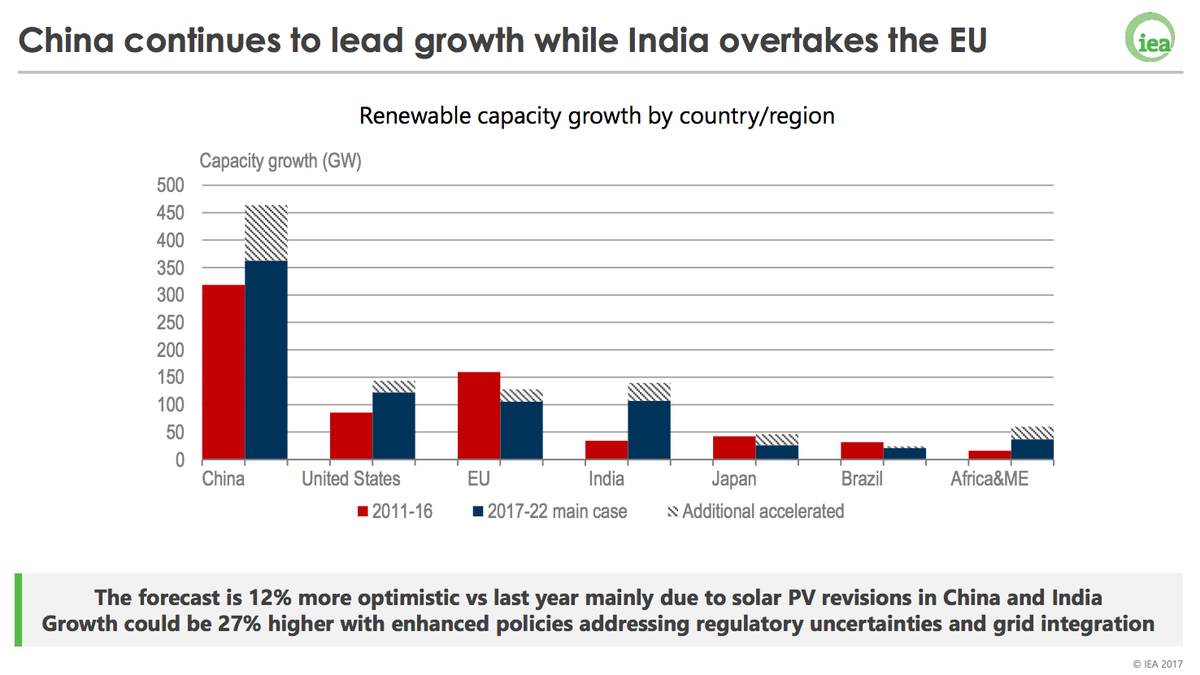 Developing countries are now looking to renewables as engines of economic growth. This includes India, which according to this year’s forecast, will soon leap ahead of the European Union with the third largest growth in renewable capacity, after China and the U.S. “Soon—and, we hope, very soon—African countries may see the next wave of development supported by cheap renewable power,” the IEA report anticipates. 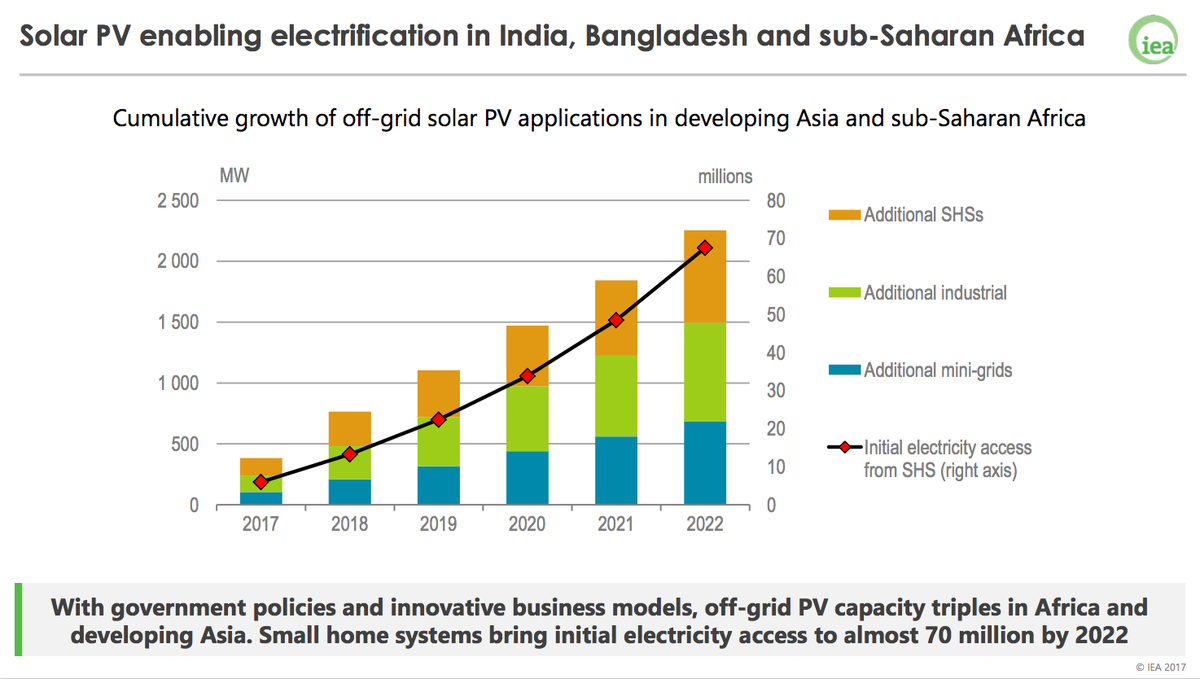 Despite the clear trajectory of global energy supply towards renewables, as reflected in this IEA report, the Trump administration is currently threatening tariffs on cheaper Chinese solar panels and has just proposed a bailout for uneconomical coal plants. “What would the tariff accomplish?” Frankl asked rhetorically. He then answered, “One thing is for sure: they would make U.S. PV much more expensive than it is today.” Because Chinese companies account for more than 60 percent of global PV manufacturing—and thus set global PV prices—and American companies produce relatively little to the global market, it’s hard to project how the proposed tariff would effectively rescue the American companies. Rather, it would slow PV deployment in the U.S. at precisely the time the rest of the world is pivoting aggressively to solar.