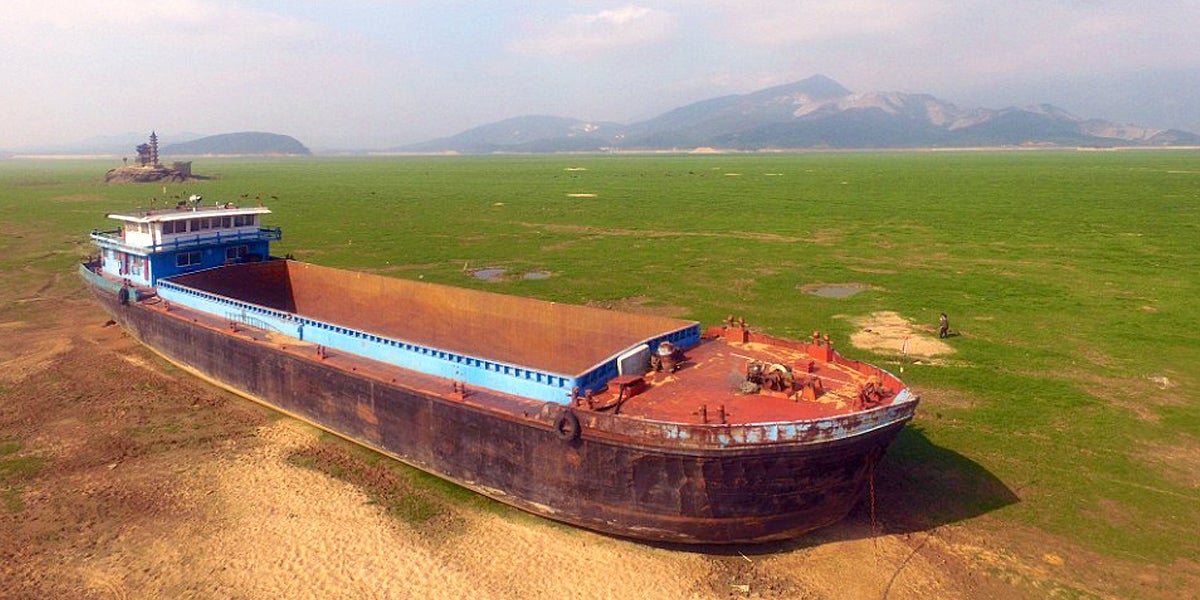 China’s Poyang Lake, which was swollen by El Nino rains earlier this year, has dried up dramatically since mid-September as the region’s dry season arrived 54 days ahead of schedule.

The freshwater lake, which can grow to 1,737 square miles—big enough to cover an area larger than Rhode Island—sees regular seasonal variations but has started receding earlier each year since 1952. Xinhua, China’s official news agency, said that diversions from the Yangtze River, a prolonged dry season and industrial activities are responsible.

This year, the water level in Poyang Lake dropped from 39.4 feet on Sept. 19 to 34.8 feet on Nov. 3, according to Xingzi Hydrological Station, which monitors the lake. Cattle are now grazing on the exposed lakebed. Tourists can walk large portions of the dried-up lake, while a large ship sits stranded on the bottom.

The largest freshwater lake in China, Poyang provides critical habitat for half a million migratory birds each year, including Siberian cranes. Less than 3,000 Siberian cranes remain in the wild and they are considered a critically endangered species.

The highly intelligent finless porpoise also calls the Poyang Lake home. Eight animals were removed from the lake in 2014 to secure habitats as the declining lake posed a threat to their survival. A healthy population also lives in the Yangtze River, under a conservation project led by WWF.

Uncounted numbers of dead fish lie on the dry Poyang lakebed. Local fisherman have seen their catch decrease and the fishing season shortened by two months due to the extended dry season.

In early 2012, the size of the Poyang Lake reached a low of 124 square miles. China Topix surmised that it “might soon share the fate of the Aral Sea.” Once the world’s fourth-largest salt-water lake, 60 percent of the Aral Sea disintegrated after decades of water diversion began under the Soviet Union.