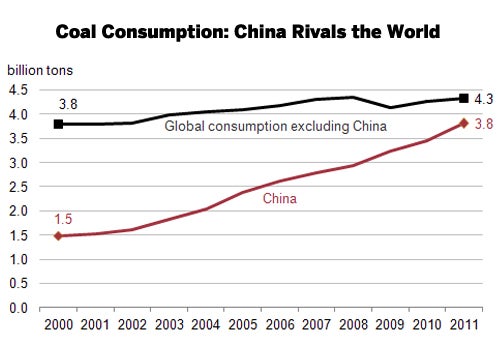 Coal consumption in China grew more than 9 percent in 2011, continuing its upward trend for the 12th consecutive year, according to newly released international data.

China’s coal use grew by 325 million tons in 2011, accounting for 87 percent of the 374 million ton global increase in coal use, according to the U.S. Energy Information Administration. Of the 2.9 billion tons of global coal demand growth since 2000, China accounted for 2.3 billion tons (82 percent). China now accounts for 47 percent of global coal consumption—almost as much as the entire rest of the world combined. 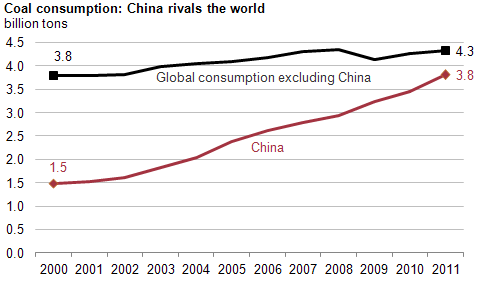 According to the U.S. Energy Information Administration, robust coal demand growth in China is the result of a more than 200 percent increase in Chinese electric generation since 2000, fueled primarily by coal. China’s coal demand growth averaged 9 percent per year from 2000 to 2010, more than double the global growth rate of 4 percent and significantly higher than global growth excluding China, which averaged only 1 percent.

These numbers help explain the poor air quality Beijing, China has been experiencing. In mid-Januray, Beijing’s air pollution went off the charts. The pollution was about 40 times more than the limit set by the World Health Organization. One of Beijing’s biggest hospitals, Peking University Hospital, reported treating twice as many heart attacks over the weekend. The Beijing children’s hospital said a third of its outpatient visits in the past two days were due to lung ailments. The World Bank found that China’s air pollution causes damage equal to 5 percent of the country’s GDP, or $360 billion, each year. 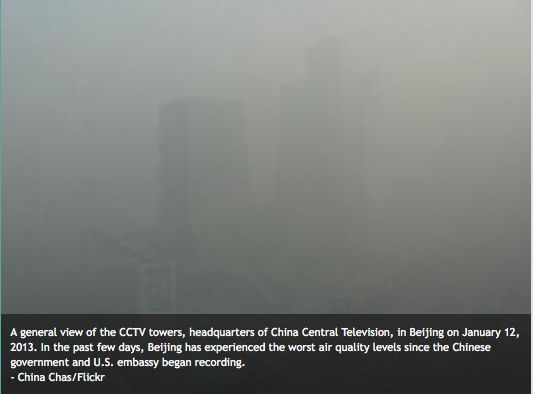