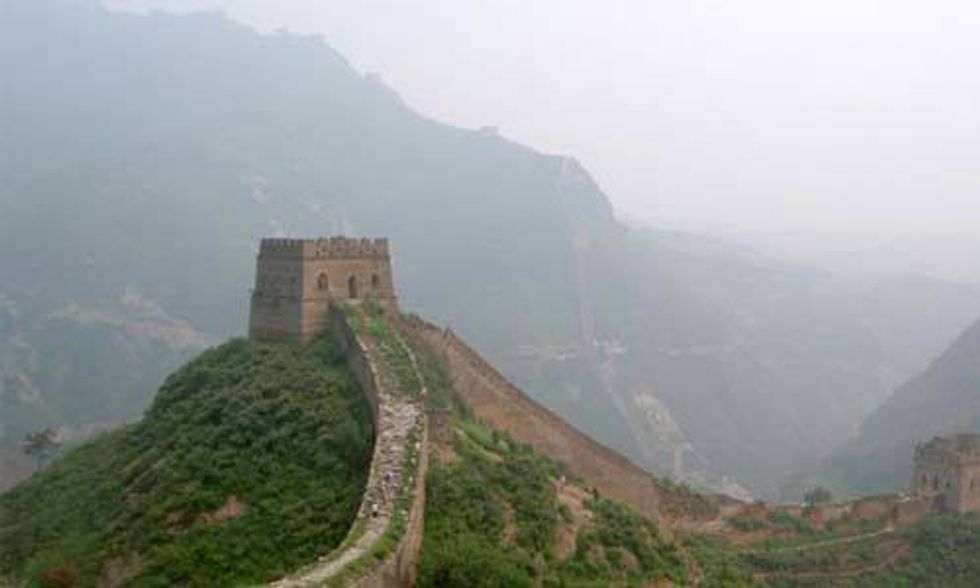 China says it will not approve any new coal mines for the next three years. The country’s National Energy Administration (NEA) says more than 1,000 existing mines will also be closed over the coming year, reducing total coal production by 70 million tons.

The Great Wall of China at Badaling, 80 km from Beijing: The pollution hangs heavy. Photo credit: Robysan at the German language Wikipedia via Wikimedia Commons

Analysts say this is the first time Beijing has put a ban on the opening of new mines: the move has been prompted both by falling demand for coal as a result of a slowing economy and by increasing public concern about hazardous levels of pollution, which have blanketed many cities across the country over recent months.

A 2015 study estimated that air pollution—much of it from the widespread burning of coal—contributed to up to 1.6 million deaths each year in China.

The country is by far the world’s largest producer and consumer of coal, the most polluting fossil fuel. Emissions from coal-fired power plants and other industrial concerns in China have made it the world’s largest emitter of greenhouse gases, putting more climate-changing gases into the atmosphere each year than the U.S. and the European Union combined.

In accordance with an agreement reached with the U.S. in late 2014, and in line with pledges made at the recent Paris summit on climate change, China aims to radically cut back on coal use in future.

Whether or not that decline in coal use will be speedy or ambitious enough to head off serious national and international climate change is not clear.

There are also questions about whether the coal-mining regions of China—predominantly in the north of the country—will ever recover from the  environmental devastation inflicted on them.

Vast swathes of land in Shanxi province, once the main coal production area, have been destroyed by mining: air and water pollution has caused a health crisis in many regions.

The province of Inner Mongolia—bigger than France and Spain combined—is now the main area for coal, accounting for about 25 percent of China’s total production, most of it through open-cast mining. Copper, lead and uranium are also mined in the province.

Indigenous groups of nomadic herders say their lands are being destroyed and water sources poisoned by mining, with ponds full of toxins littering the countryside.

Concerns have also been raised about vast uranium deposits found near coal-mining areas. China’s fast-growing nuclear industry has complained that vital uranium deposits might be contaminated by coal mining: others fear that uranium-contaminated coal could be being burned in power stations, showering radioactive dust on the surrounding countryside and its inhabitants.

Silencil Reviews: Does It Work for Tinnitus?