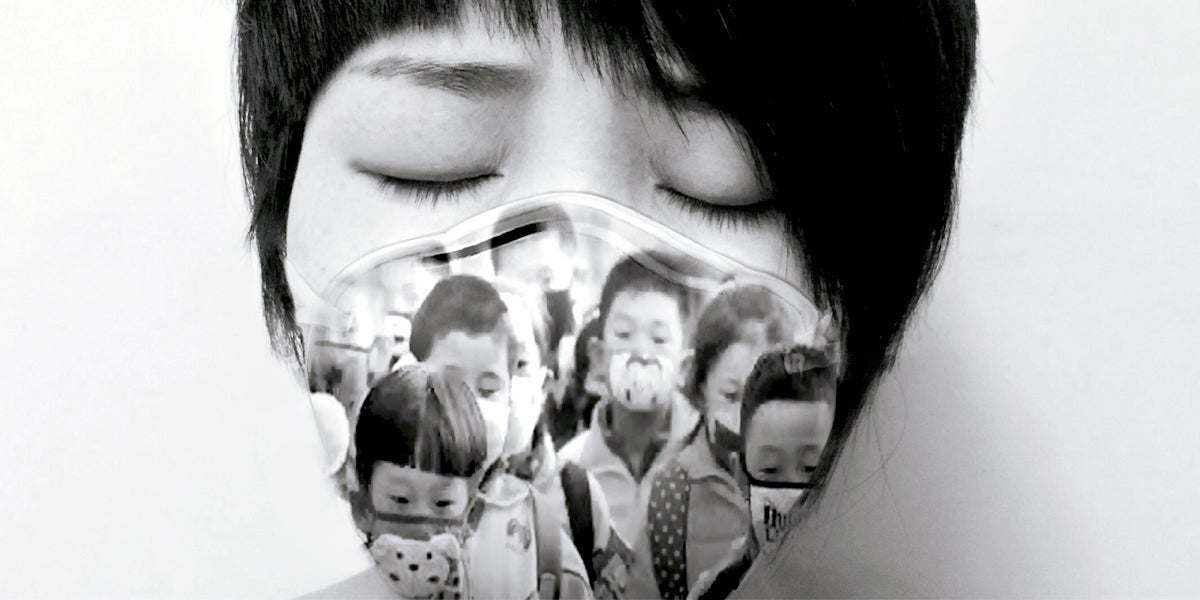 With avenues of protest and online discussion strictly controlled, artists in China are finding increasingly creative ways to voice their frustration at their cities’ appalling air pollution.

It’s easy to see why: at the end of 2016, an area of China larger than Spain and Portugal put together was trapped under a cloud of smog that didn’t leave for five days, causing a spike in respiratory illnesses, grounding flights and causing a panicked exodus from the city (for those who could afford it).

Northern China's #smog is affecting 460 million people, equal to the populations of the US, Canada & Mexico combined https://t.co/AX5sevEhjT pic.twitter.com/j81HRtBw8G

2017 then began inauspiciously with the longest air pollution episode seen this century.

Years of winters spent under a seemingly endless cloud of smog has spawned some seriously creative protest art. Here are five artists that found unique ways to speak up against air pollution.

In December 2015, when Beijing’s air quality was so bad that it triggered the very first red alert, one artist used a very interesting weapon of choice: an industrial-sized vacuum cleaner.

For 100 days, Nut Brother wandered the streets of Beijing sucking in the capital’s dense, soupy air. When he’d finished, he mixed the pollution he had hoovered up with clay and compressed it into a dense block, roughly the size and shape of a building brick. Nut Brother and his smog bricks quickly went viral as his quirky art performance showed the world a new and powerful symbol of China’s smog battle.

His project, while playful in tone—some reports stated that he planned to “reintroduce” the smog brick into a building site, like returning an animal to the wild—Nut Brother had a poignant message to impart: “The day we exhaust all of the Earth’s resources, we will ourselves turn into dust.”

Artist Liu Bolin is best known for his incredible ability to camouflage himself into almost any background. But during the Beijing’s third red alert in December 2016, he went down a decidedly more conspicuous route.

Masked and wearing a high-vis jacket on which were strapped 24 cell phones, Liu live-streamed the smoggy cityscape as he walked the streets. The artist and sculptor, who described China’s air quality as “a disaster” has gained international attention for his Hiding in the City series and has been photographed for fashion campaigns by Annie Liebowitz.

Sick of feeling helpless in the face of China’s toxic air pollution and worried for her child’s health, Beijing artist Wen Fang fought back in the only way she could: through art.

For a global climate art project, she took part in Maskbook a series of images that takes the pollution mask—a mundane symbol of the very real fears that Chinese urban residents face—and turns it into an absurd work of art. 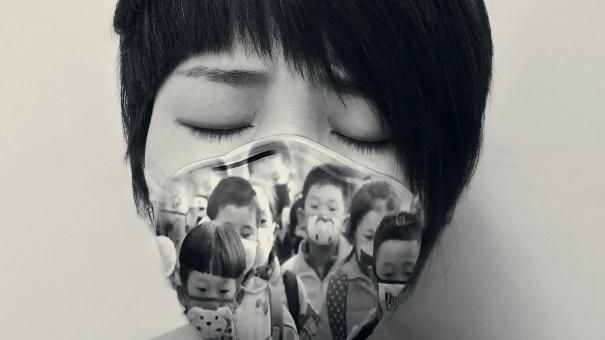 The name comes from a common Chinese joke about Facebook: “In China, since we all wear masks to protect us against the pollution, we say that Facebook for us should be renamed Maskbook.”

Project participants come from all over the world and included more than1,500 participants, each of which designed their own unique masks.

“In my opinion, individual participation is important. The special thing about Maskbook is that it all comes from common people, from all different colours and nations,” said Wen Fang.

We all know what air pollution looks like, but how can we truly experience it if we’re not living with it? Scent can be exceptionally evocative as Zhang Lingling learnt when she spoke to people of their experience living in smog and heard their descriptions of the smell of pollution.

With that in mind, she collaborated with a friend to make the first ever “smog perfume,” a scent that has been described by a test audience as smelling of eggs, rotten fish and burning alcohol.

By making the perfume and testing it on the unsuspecting public of Shanghai, Zhang wanted to remind people that air pollution is a continuous problem, even when you can’t see it.

When airpocalypse hits, Beijing artist Kong Ning can be found at the city’s most popular landmarks and out on the streets, in striking dresses of her own creation. 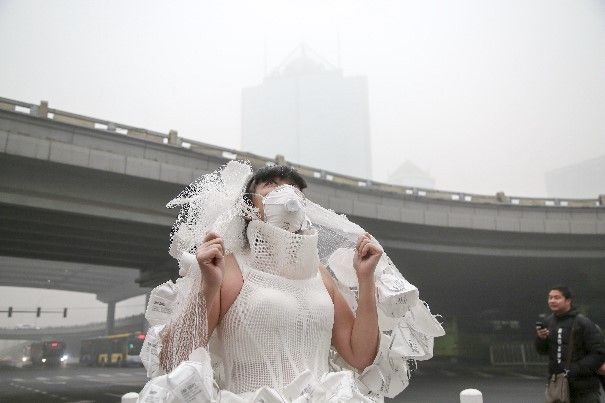 In December 2015, she stepped out in a wedding dress adorned with hundreds of air pollution masks and walked the streets appealing to Beijingers to take public transport rather than contribute to the choking smog by driving. The year before, she was photographed outside the Beijing Exhibition center in another, wedding dress complete with a 10-meter-long train in a piece entitled “Marry the Sky.”

Her most striking outfit was created in response to an orange alert called by the government when she appeared at Beijing’s historic Drum tower in a dress covered in bright orange cones.

Kong Ning’s approach stems from the idea that “humans are married to nature. We need to show that we love the environment.”

Anna McGurk is an editor for Greenpeace East Asia.