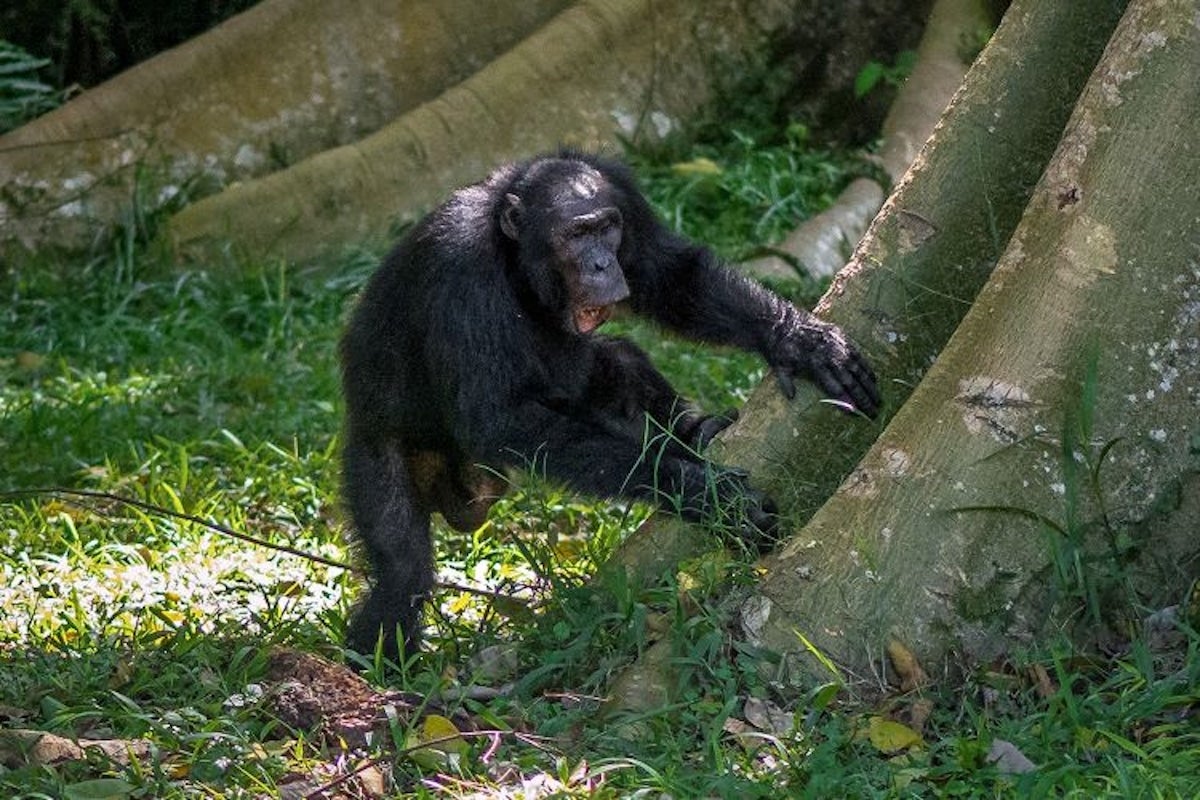 Chimpanzees in Uganda’s Budongo Forest have their own signature style when drumming on trees. University of St. Andrews

It turns out that humans aren’t the only animals who pound out beats to express themselves.

A new study published in Animal Behavior Tuesday found that male chimpanzees in Uganda’s Budongo Forest use “individual drumming ‘signatures’” when they drum on the buttress roots of trees, so much so that researchers could compare different chimps to famous human rockstars.

The researchers observed chimpanzees in the Waibira community as they drummed on the buttress roots of trees.

“If you hit the roots really hard, it resonates and makes this big deep, booming sound that travels through the forest,” study co-author Dr. Catherine Hobaiter of the University of St. Andrews told BBC Radio 4’s Inside Science programme, as BBC News reported.

The sound can travel for up to one kilometer (approximately 0.6 miles) and is accompanied by a vocalization unique to chimpanzees known as a “pant hoot,” the study authors explained. The chimpanzees typically drum with their feet, according to AFP, but do use their hands as well, turning the tree root into a full drum kit.

The team sought to learn more about these chimp drum circles by recording the stylings of seven male chimps and noting how long they paused between beats. Soon, the researchers discovered that the different chimps would make unique sounds. Some of them, like Tristan, sounded more like rock drummers while others favored a more syncopated, jazzy style.

“I was surprised that I was able to recognise who was drumming after just a few weeks in the forest,” Eleuteri told BBC News. “But their drumming rhythms are so distinctive that it’s easy to pick up on them.”

However, the chimpanzees didn’t use their signature styles every time they drummed. They tended to use them while traveling, but not during displays.

“Together these findings suggest that chimpanzees may be able to choose to encode identity within individual drumming ‘signatures,’” the study authors concluded.

Hobaiter explained why the chimpanzees might want to disguise their identity during displays.

“If you’re showing off to a group around you — if you’re displaying — you might not necessarily want the big alpha male who’s around the corner to know who you are,” she told BBC News. “You don’t want to give the game away.”

The study may help researchers answer other questions about chimpanzee behavior. One question is the question of why chimpanzees will greet each other to say hello, but make no comparable gesture of goodbye.

“The chimps might not need to say goodbye, because they’re effectively able to keep in touch while they’re away,” Hobaiter told BBC News. “These long distance signals give the chimps a way to check in with one another.”

Another question is whether chimpanzees — our closest genetic relatives — share our sense of music.

“I do think that chimpanzees, like us, potentially have a sense of rhythmicity, a sense of music, something that touches them on an almost emotional level, in the way that we might have a sense of awe when we hear an amazing drum solo or another kind of dramatic musical sound,” Hobaiter told AFP.

6 Must-See Environmental Films and TV Shows of 2023
Looking for something to watch? Check out these environmental films
By Linnea Harris
Traffic Air Pollution Can Impair Human Brain Function Within Just Two Hours, Study Finds
Researchers at the University of British Columbia and the University
By Paige Bennett
Doomsday Clock Moves to 90 Seconds Before Midnight Following 'Russia’s Invasion of Ukraine and the Increased Risk of Nuclear Escalation'
The Bulletin of Atomic Scientists set its Doomsday Clock to
By Climate Nexus