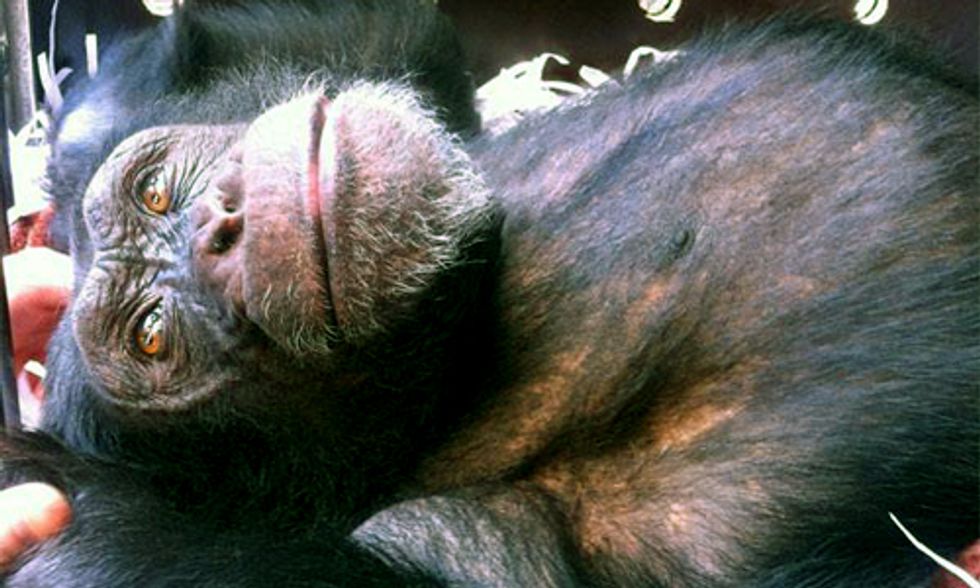 The last known chimpanzee in Lebanon was confiscated from a zoo on Saturday and placed in Animals Lebanon’s care after courts ruled he was smuggled to Lebanon.

Charlie was taken from the wild, most certainly saw his mother shot and killed, then survived being smuggled from Africa to Lebanon, and has not seen another chimpanzee in nine years.

Charlie, a nine year old chimpanzee, was smuggled to Lebanon in 2005 and sold from a pet shop before ending up in Animal City zoo. The Ministry of Agriculture declared in 2006 that Charlie was smuggled into Lebanon and that no permits have been issued for his importation. An attempted confiscation in early 2006 failed after the zoo removed Charlie the day before the confiscation was to take place.

Animals Lebanon recently took up the case to free him from the zoo and move Charlie to an approved chimpanzee sanctuary where he could get expert care and live with other chimpanzees in a natural enclosure.

“Charlie was taken from the wild, most certainly saw his mother shot and killed, then survived being smuggled from Africa to Lebanon, and has not seen another chimpanzee in nine years,” said Jason Mier, executive director of Animals Lebanon. “There is overwhelming research, international standards, and international conventions which illustrate how wrong this is on so many levels.”

The Ministry of Agriculture supported moving Charlie into the care of Animals Lebanon on the basis that he is sent to an appropriate sanctuary in accordance with the Convention on International Trade of Endangered Species that Lebanon has recently joined.

Dr. Doug Cress, coordinator of the United Nations Great Ape Survival Programme, supported the confiscation and transfer to a sanctuary, explaining that if Charlie continues to live alone he will undoubtedly suffer.

According to international guidelines chimpanzees should never be housed alone for any extended period of time unless it is necessary for the physical or psychological well-being of that individual.

Criminal judge Dina Dabboul issued a decision confirming Charlie was smuggled to Lebanon and detained illegally by the zoo. The zoo, zoo owner and the person who smuggled Charlie to Lebanon were found guilty, ordered to pay fines to the government and Animals Lebanon and obliged the zoo to hand over Charlie.

As Charlie was hidden during the first confiscation attempt, judge of urgent matters Antoine Tohme decided to immediately transfer Charlie from the zoo and place him under the custody of Animals Lebanon.

On Saturday, Animals Lebanon, lawyers Mazen Rasamny and Salwa Abdallah in charge of the case, head clerk of the court of urgent matters and the police went to the zoo, sedated Charlie and moved him to a transport crate.

Dr. Rosa Garriga, the vet who sedated Charlie, reported he was small for his age, that his right leg has marked muscle atrophy and is unable to stretch fully, and that the toes are bent and with limited movement. The report stated, "this condition has probably existed for several years and there is no doubt this has caused significant ongoing pain and discomfort."

Charlie is now being moved into a purpose built enclosure where he will be given a proper diet and schedule of daily enrichment, and able to enjoy as natural of a setting as possible until he can be transferred to the sanctuary and get the medical care he needs.

“This case is not against the zoo, it is for Charlie,” continued Mier. “He has suffered enough and we will spare no expense to make his life as good as possible, and get Charlie to a sanctuary and with other chimpanzees as quickly as we can.”

This is a first for Lebanon and the beginning of hope for many endangered animals like Charlie.