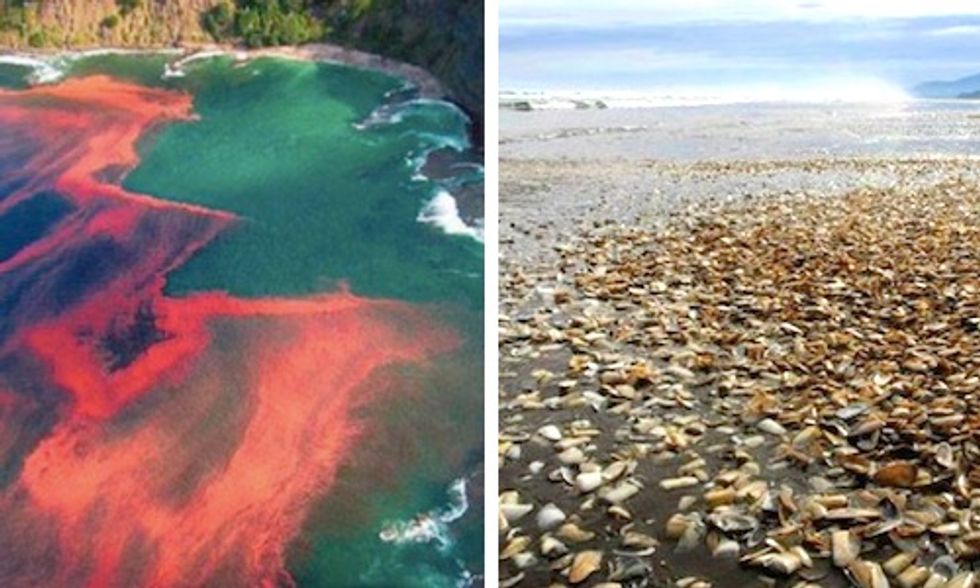 The unprecedented red tide in Chile's coastal waters—which has killed more than 20 million fish—has triggered protests and a public health crisis in the South American country.

The virulent algal bloom, which turns waters red and seafood poisonous, is "the worst case" of red tide in the country's history and has devastated its fishing industry. Reuters reported in March that the deadly bloom has decimated 15 percent of Chile’s salmon production putting the total economic blow from lost production at around $800 million. The government has declared an emergency zone in the south of Chile as it deals with the red tide.

The Guardian reported that the algal bloom has been rapidly spreading along the coast of Patagonia for hundreds of miles, poisoning dozens of people and spurring angry protests from fishermen.

According to Earth First! Journal, tens of thousands of people have been involved in riots in Valparaíso, Santiago, Concepción, Temuco, Valdivia, Osorno, and Puerto Mont to support Chiloé Island, whose salmon farms have suffered most from the lethal algal bloom, which emits a toxin that paralyzes or kills marine life. Undercurrent News reported that salmon farmers are incurring losses up to $10 million a day due to the phenomenon.

As EcoWatch mentioned previously, algal blooms are becoming increasingly frequent in fresh and saltwater bodies around the world. Warming waters from climate change, inorganic fertilizers, and manure runoff from industrial agriculture and wastewater treatment plants have been pegged as conditions that can cause algal blooms. Experts have also blamed El Niño for fueling the algal bloom and causing endless scores of dead sea life to wash up on Chilean beaches.

Questions are being raised on whether human activity may have worsened the red tide, as National Geographic explained:

From February to March this year, one of these blooms killed 25 million salmon in 45 farming centers in Chile. What happened next would prove to be controversial.

About thirty percent of the dead fish were taken to landfills. But the rest were thrown into the sea, about 80 miles (130 kilometers) from Chiloé island. That operation was authorized by the Chilean Navy and the fisheries managers.

A few weeks later, a wave of more dead sealife washed up on Chiloé. While the government has blamed El Niño, many on the island suspect the dumping of the dead salmon might have had something to do with it. It's one more example of the lax regulations of the country's aquaculture industry, they say, which has exploded since the 1970s, making Chile the world's second largest exporter of salmon.

Environmentalists have complained for years that Chile's aquaculture industry has polluted the water through feces and unfinished food, which may build up on the seafloor.

Following accusations from local fishermen and communities, Chilean authorities and a scientific workforce are currently investigating the country's salmon industry, the world's second largest, for potentially exacerbating the algal bloom by dumping rotten or contaminated fish into the sea.

"A team of five excellent professionals has been formed that will be working on the task of examining the link between the dumping of salmon and the red tide phenomenon," said Economy Minister Luis Felipe Cespedes in a statement.

“I want to categorically affirm that we are investigating the possible criminal acts in regards to the dumping of dead salmon into the sea,” regional prosecutor Marcos Emilfork announced.

“Environmental crimes are extremely serious and are a priority,” adding that a prison sentence would be appropriate for those found guilty.