Chile to Create One of World's Largest Marine Parks 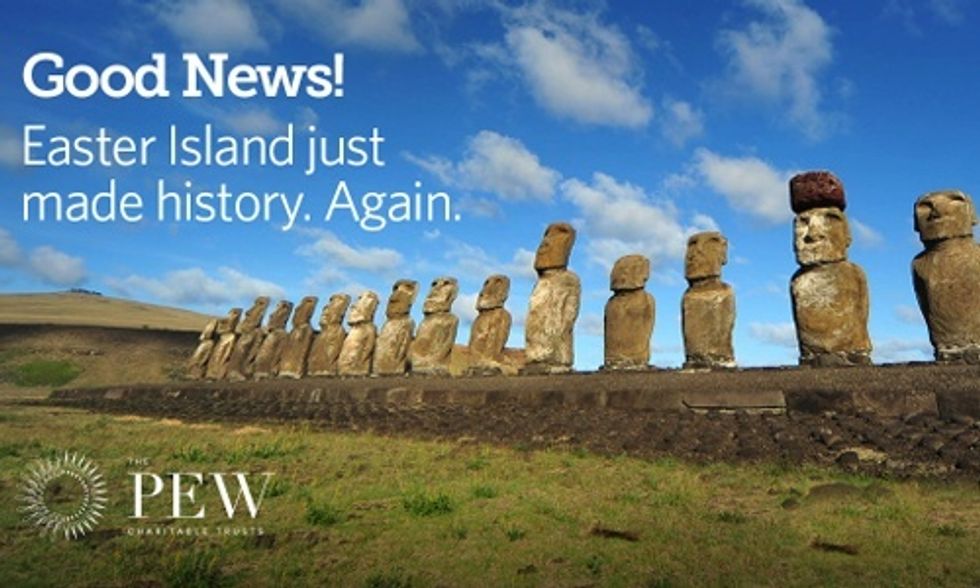 The Pew Charitable Trusts and Bertarelli Foundation applaud today’s action by the Chilean government to create one of the world’s largest fully protected marine parks in the waters surrounding Easter Island, a Chilean territory in the South Pacific Ocean. The park was announced by Chile’s President, Michelle Bachelet.

The new marine park will be the third-largest fully protected area of ocean in the world. Photo credit: The Pew Charitable Trusts

At 631,368 square kilometers (243,630 square miles), the new marine park will be the third-largest fully protected area of ocean in the world. The indigenous community of Easter Island—or Rapa Nui, as the island, its indigenous people and their language are known—proposed the park to safeguard the biodiversity of the island’s waters, which are home to 142 endemic species, 27 of which are threatened or endangered. The park also will help the Rapa Nui continue centuries-old subsistence fishing practices within an area that extends 50 nautical miles from the shoreline.

Pew’s Global Ocean Legacy program, in collaboration with the Bertarelli Foundation, has supported the Rapa Nui’s efforts to protect their ocean waters since 2012. The Rapa Nui will now finalize their proposal through a consultation process with their entire community.

"World famous for its Moai statues, Easter Island will now be known as a global leader in ocean conservation," said Joshua S. Reichert, who leads environment initiatives at Pew. "This announcement is an important step toward establishing the world’s first generation of great parks in the sea."

"Creation of the Easter Island park protects one of the last near-pristine ocean wildernesses on Earth,” said Reichert "and one that holds great cultural, religious and economic importance to the Rapa Nui people. It is both a triumph for the Rapa Nui and for the government of President Bachelet."

Research and progress toward the park was made possible with the support of the Bertarelli Foundation, which has made significant investments in securing other large-scale protected areas. The foundation’s support enabled the largest scientific assessment ever completed of the island’s marine environment, an economic analysis of the impact of a marine park, education and training for the local population, the facilitation of cultural exchanges with other native Polynesian people and assistance with monitoring for illegal fishing activities.

"This is an exciting breakthrough and I’m very proud of the role the foundation has been able to play in supporting the Rapa Nui’s campaign and bringing this about," said Dona Bertarelli, chair of the foundation. "Rebuilding ocean resilience through protected areas is a crucial contribution to wider ocean health, in addition to securing the unique habitats of Easter Island for future generations."

Some 4,000 kilometers (2,500 miles) west of Chile’s mainland, the largely unexplored waters of Easter Island are an oasis in the nutrient-poor Pacific and known to contain biological hot spots—including the only hydrothermal vents in Chilean waters.

The area is also an important spawning ground for many species, including tuna, sharks, marlins and swordfish.

"This marine park will not only conserve the many species that call the waters of Easter Island home but also the traditions of our Polynesian ancestors and the Rapa Nui people,” said Pedro Edmunds Paoa, Easter Island’s mayor. “The park will be complemented by a fishing area that will allow our ancient practice of tapu—or smart fisheries management—to endure.

"The ocean is the basis of our culture and our livelihood," said the mayor. "The Rapa Nui community is immensely proud of this marine park, which will protect our waters for generations to come."

Creation of the marine park will help combat illegal fishing—a problem that has been detected by satellite monitoring of activity in Chilean waters as part of a joint project supported by Pew and The Bertarelli Foundation. Because all extractive activity will be prohibited inside the new marine park, vessels engaged in illicit activity will be easier to identify.

In January, Chile participated in the launch of Pew’s Project Eyes on the Seas. Developed in partnership with the UK-based Satellite Applications Catapult, this innovative satellite technology can be used to monitor marine reserves remotely and detect suspicious activity within moments of it happening. An enforcement plan for the new park is still to be determined.

Pew’s Global Ocean Legacy works with local communities, governments and scientists to help create the world’s first generation of great parks in the sea. To date, the partnership has helped to double the amount of fully protected ocean across the globe. International recognition of the importance of large fully protected marine reserves has been growing since the U.S. declared the Papahānaumokuākea Marine National Monument northwest of Hawaii nearly 10 years ago. This March, the British government announced the creation of the Pitcairn Islands Marine Reserve, which was proposed by Pew in partnership with the Pitcairn Island Council in 2013. And on Sept. 28, New Zealand Prime Minister John Key announced the creation of a fully protected ocean sanctuary in the Kermadecs, located about 1,000 kilometers (620 miles) northeast of his country’s North Island.