Can a Locavore Seafood Movement Save Chile’s Traditional Fishers? 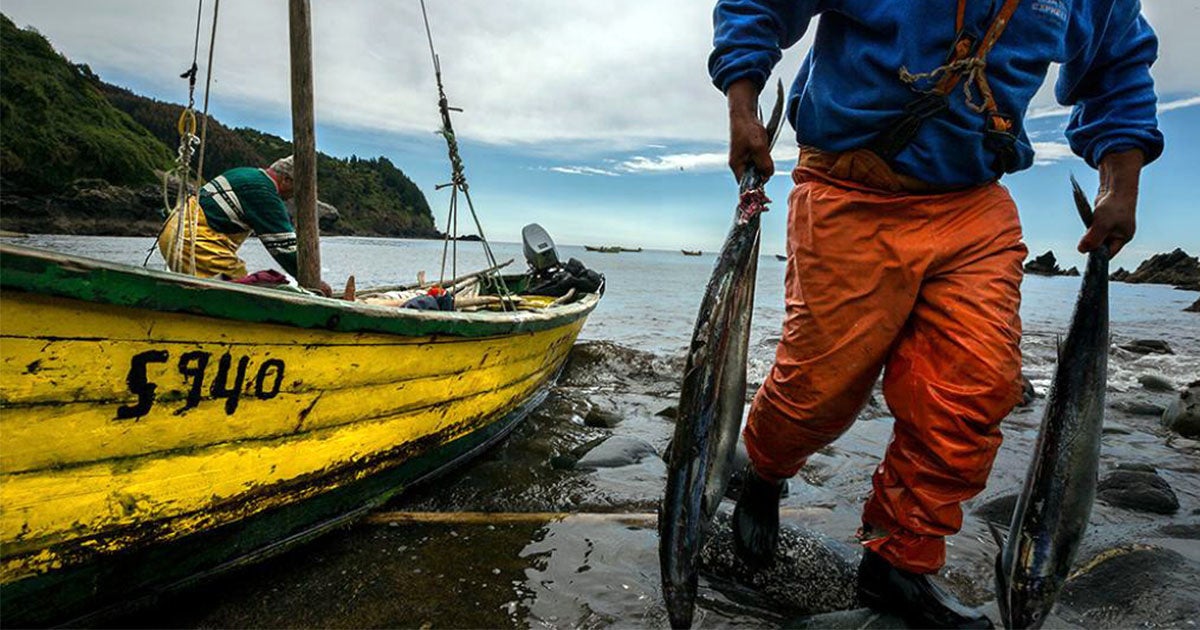 When Carlos Castro was young, he didn’t plan on following his dad and granddad into fishing. Like a lot of teenagers in the 1970s, Castro dreamt of kung fu. Bruce Lee was more his style than the family business.

Castro swam laps to shape up back then, dodging boats in the bracingly cold bay of Valparaiso, a port city in central Chile. Forty years later, he still plies those waters, driving one of the boats he used to swim past. Castro, a youthful 56 in white trainers and Nike gear, became a fisherman after all.

Every morning, Castro unloads his catch at Caleta Membrillo, a fishing dock in Valparaiso’s iconic port. The waterfront there is lined with seafood restaurants and a fish market that buzzes with activity beginning well before dawn. This city may look like a mecca for local, artisanal seafood, but looks can deceive.

In truth, Chileans don’t eat much wild fish from Chile anymore. Even in Valparaiso’s waterfront restaurants, there’s no guarantee that what you’re eating was locally caught, let alone within a day’s boat trip of the city.

A small but growing locavore movement is changing things little by little, and reviving Chile’s long-neglected ties to native seafood. After decades of decline, renewed interest in responsible, boat-to-plate seafood could be a game changer for the country’s struggling artisanal fishers. 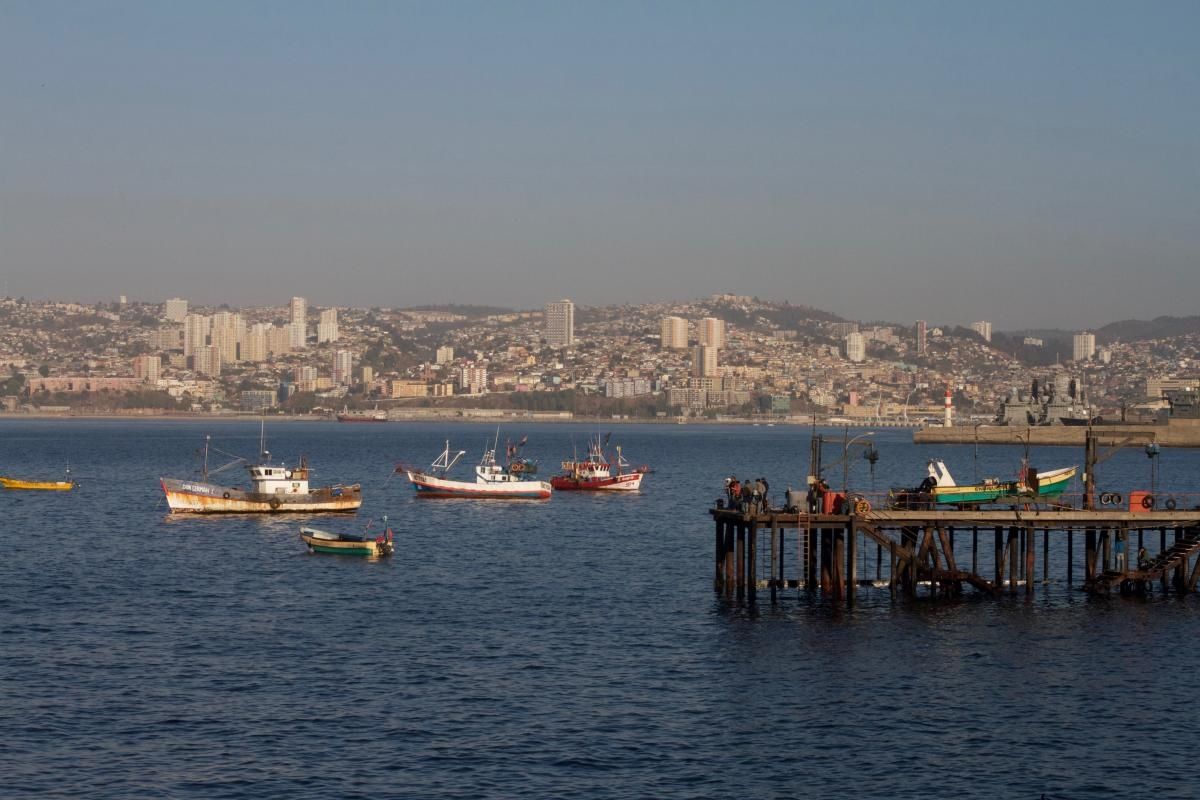 Up a steep hill overlooking Valparaiso’s bay, snapshots of local fishers, including Castro, decorate the walls of the new restaurant Tres Peces, or Three Fish. One warm March evening, curious diners trickled in during the restaurant’s soft opening.

Meyling Tang, one of Tres Peces’ three owners, spoke over appetizers of sea urchin, octopus and pebre, Chiles’ ubiquitous salsa-like condiment, here peppered with diced bull kelp. The inspiration for the restaurant was simple, she said. “There was nowhere good to eat seafood in Valparaiso.”

Tres Peces serves fish from 40 artisanal fishing cooperatives across Chile, and guarantees a market for the less-popular species that wholesale buyers often turn down. In turn, the restaurant gets top-quality products that haven’t been subject to Chile’s notoriously unsanitary and crime-ridden supply chain.

It’s risky to open a restaurant that only sells seafood from small-scale Chilean fishers, Tang admitted. For a country that has more sea than land, wild seafood is surprisingly unpopular in Chile.

The country has 4,200 kilometers (approximately 2,610 miles) of coastline, and is the fifth-most productive fishing country in the world. Chileans, however, eat just 13 kilos (approximately 29 pounds) of seafood a year, 7 kilos below the global average. Most fish, wild or farmed, is exported, or is ground up as feed supplements for the country’s enormous salmon farms. Imported tilapia has supplanted native hake as a favorite fish for Chileans.

It wasn’t always like this. Chileans have rich culinary traditions centered on the hundred-plus edible species in the nation’s waters, from seaweed and snow crab to “piure,” a bottom-dwelling invertebrate that looks like a cross between a human heart and a moss-covered rock.

Overfishing takes a big share of the blame for the drop-off in wild seafood consumption. As hake and other popular species declined, their prices shot up. Availability is also an issue. Outside of coastal towns and specialized seafood markets, it can be hard to find any fish that didn’t come from a farm.

Tang and her colleagues at Tres Peces are longtime advocates for sustainable small-scale fishing in Chile. The foundation they work with, Cocinamar, supports sustainable fishing and seafood consumption. “The restaurant was a chance for us to put our money where our mouth is,” she said. It also serves as a community space.

Fishermen like Castro come to give talks about their lives. Events bring free local seafood to Valaparaiso’s streets. It’s a chance not just to connect diners to the source of their seafood, but to deepen fishermen’s pride in their work. Tres Peces is “not only a restaurant,” Tang said. “We teach about responsible fishing. We tell stories.”

For Gustavo Sandoval, a chef from Puerto Varas in southern Chile, the biggest hurtle to a local seafood movement is public perception. There are plenty of affordable Chilean fish that go ignored. A lack of promotion and education, Sandoval explained, means that people think fish is prohibitively expensive.

Sandoval is no stranger to promoting Chile’s fish. He’s a mainstay in local and national seafood fairs, and appeared four times on the cooking show Reyes del Mar, or Kings of the Sea, on the Chilean public television station TVN. Next year, Sandoval plans to open a sea-focused sandwich shop, with most of the fish sourced from artisanal Chilean fishers.

All the fish-focused effort from chefs across Chile is having an effect, Sandoval thinks. Things are changing, he said, but slowly. 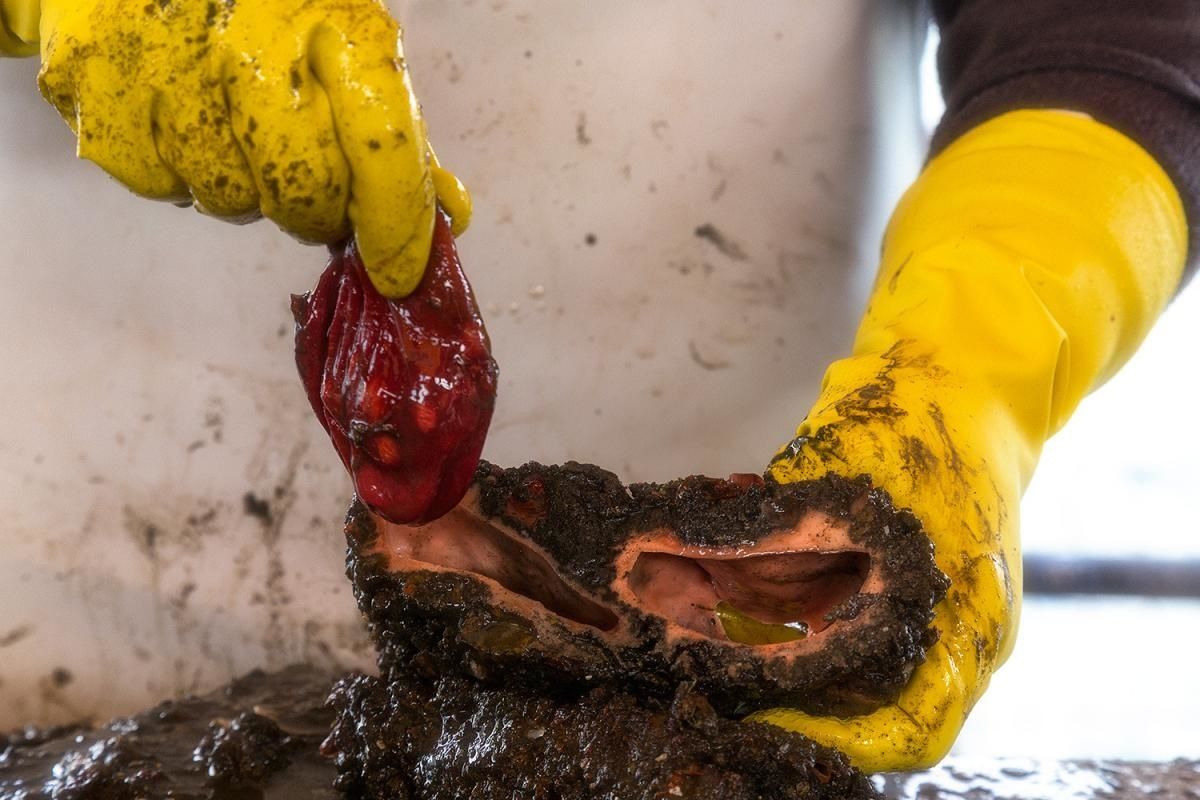 Piure, true to its looks, can be an acquired taste. Claudio Almarza / Oceana

As of late May, things had changed in at least one place. Tres Peces was open full-time and business was brisk. A critic for the prominent newspaper La Tercera called it one of the year’s best new restaurants.

Promisingly, other chefs had approached Tres Peces asking for its seafood suppliers—a trade secret Tang was happy to share. “With one restaurant, you can’t make a change,” she said. “We’re just a pilot. We hope others will copy us.”

Since Tres Peces opened, Castro has seen an important change too. He used to go home after selling his morning’s catch. Now, he has a second shift delivering to Tres Peces and other restaurants in Valparaiso. The extra work means he’s earning a better and more stable living.

There’s still a long way to go. Fish populations are slipping, Castro said, and artisanal fishermen feel squeezed by Chile’s wealthy industrial fishers, who have larger, more powerful ships and a bigger share of the country’s fish quota. Young people by and large have turned away from a life at sea, leaving older fishers worried for the future of their way of life.

But becoming a bit of a local fishing celebrity has given Castro a fresh outlook on his work. He’s not a kung fu master, but there are some perks to the job. He loves the sea and the contact with nature, he said. “Every day is an adventure.” 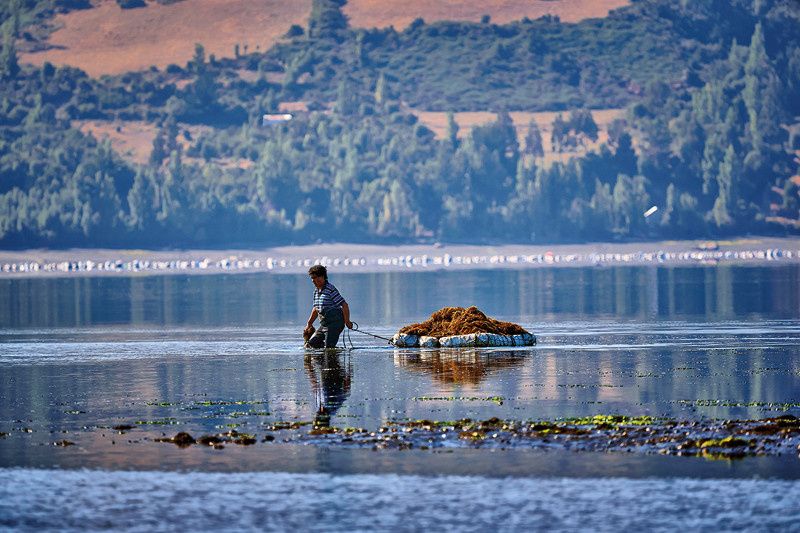 Hand-gathered bull kelp, or cochayuyu, is a traditional ingredient in stews and salads. Claudio Almarza / Oceana