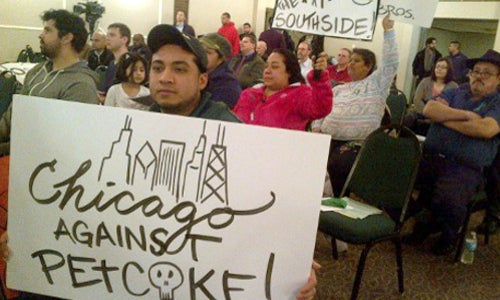 Chicago elected officials have vowed to crack down on the growing piles of petcoke stored by a subsidiary of Koch Industries and another company along the Calumet River on the city’s far southeast side.

But at a public hearing Monday night, local residents made clear that they don’t trust the City Council or Mayor Rahm Emanuel to take meaningful action on the issue. 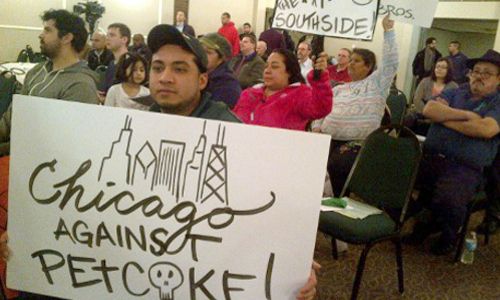 They think the city’s proposed storage regulations—crafted by the public health department at the mayor’s behest—would allow piles of petcoke to keep growing and polluting their neighborhood.

Alderman John Pope, who represents the Chicago neighborhoods most affected, and Ed Burke, a powerful alderman with an interest in clean air, have proposed two ordinances related to petcoke. One favored by Burke would ban petcoke storage in Chicago. The other, pushed by Pope, would impose site-specific regulations.

The proposed city rules would cover storage of solid bulk materials including petcoke, coal, ore and other materials used as fuel. Piles of salt, construction and demolition debris, waste and recycling material would not be subject to the regulations.

Pope, like Mayor Emanuel, said a ban could mean a costly and ultimately unsuccessful court battle. As for the ordinances calling for a ban or regulations, Pope said, “we’ll try to decide which one makes sense. We might do them together, or just one or the other.”

In Chicago ordinances almost never pass without the mayor’s support, however, so a ban appears highly unlikely.

The strictest regulations would only cover large new operations that receive more than 10,000 tons every five days or store more than 100,000 cubic yards at a time. Such operations would have to enclose their piles in buildings with door flaps to ensure no dust escapes.

However, existing smaller operations would not be subject to the strictest regulations and could continue storing petcoke outdoors. They would be required to have wind barriers around the piles, spray water and/or chemical sealers on piles and run at least four dust monitors on the perimeter. Piles could not exceed 30 feet high. Loading and unloading would still have to be done in an enclosure.

Residents said the breaks for smaller, existing facilities are unacceptable.

“The Koch brothers will create 10 smaller companies tomorrow and spread it all along the river,” said Carl Camacho, 33, who has lived his entire life in the neighborhood.

“Do they know how wind works?” added Bautista after the hearing. “Those barriers won’t do anything.”

Critics also blasted the fact that the regulations would be crafted and enforced by the city’s health department, which is already considered under-staffed and resource-strapped. The Department of Environment was eliminated in 2011.

The regulations as proposed by the health department would not need City Council approval to be instituted. And most disturbingly to many critics, the regulations provide for variances that can be approved by the department—giving companies exemptions from the rules—without input from residents or City Council oversight.

Representatives of the Environmental Law Policy Center (ELPC), the Natural Resources Defense Council (NRDC) and the Respiratory Health Association of Metropolitan Chicago (RHAMC) criticized the regulations at the hearing and promised to submit detailed comments by the deadline, Jan. 24.

NRDC Midwest advocacy director Tiffany Ingram said the timeline for compliance is way too lenient, giving companies 90 days to come up with a “dust plan” and install monitors, one year to install conveyor belt covers and wind barriers around outdoor piles and two years to build enclosures.

ELPC attorney Jenny Cassel said that the allowance for variances “would allow companies to get out of almost every single one of the regulations here, and gives discretion to the commissioner to grant those variances without any input from community.”

She also took exception to the laxer regulations for smaller operations. “There’s no basis in public health why these smaller facilities don’t pose as much as a threat as the larger ones,” Cassel said.

The ELPC and NRDC are members of RE-AMP, which also publishes Midwest Energy News.

“Science shows there is no level where you do not see a health impact,” Urbaszewski said.

Critics were also furious that the regulations do not include penalties for violations. The city attorney who summarized the regulations noted that violators would be subject to the existing city fines for air pollution violations—between $1,000 and $5,000 per day. But residents said they were skeptical that fines would actually be levied.

Alderman Pope said that if the regulations are passed, residents will play a major role in enforcing them. “They are our best eyes and ears,” he said.

The regulations require that trucks, barges and trains carrying material in and out of storage facilities have their loads covered, and that trucks go through a wheel wash so they don’t pollute roadways. The regulations also require street-washing and vacuuming machines to clean up any residue. But many residents decried the requirement for trucks specifying that only half the load must be covered.

“The whole regulation is half-you-know-what,” said Lorraine Ashby, a retired attorney, after the hearing where she had made a comment on behalf of the area’s retired union Steelworkers.

“The rules seem more designed to quiet us and help people sell tarps than address the issue,” said resident Anthony Martinez, who helped spark public outrage by posting a photo on Facebook of massive dust clouds blowing from the piles last summer. “Environmental justice is at the root of this issue.” 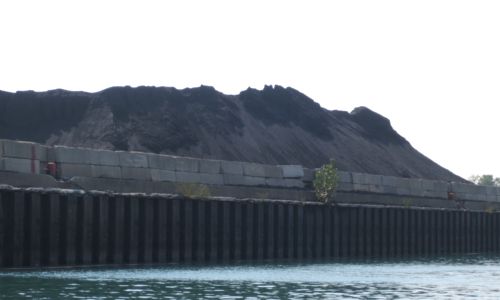 Not a single person at the meeting commented in favor of the regulations. While about 30 residents and advocates blasted them as too lenient—and many more in the audience held signs or called out offering similar sentiments—representatives of the Koch subsidiary KCBX and the Illinois Chamber of Commerce criticized the regulations as too stringent.

Illinois Chamber Energy Council executive director Tom Wolf is concerned about the effect the regulations could have on products and industries unrelated to petcoke. And he opposes the “prescriptive nature” of the regulations—mandating specific practices.

“Regulations work best when they give companies goals they can find creative ways to meet,” Wolf told Midwest Energy News. “It’s goals versus tactics—there can be different solutions for different areas of the city.”

Mike Estadt, KCBX operations manager, said the company would not be able to meet the setback requirements included in the regulations—that bulk storage be at least 660 feet from a childcare center and 300 feet from residences—limits that are already enshrined in city regulations regarding landfills and other operations. The setback requirements “would cause closure of our facility,” he said.

The regulations also call for suspending operations when the wind is blowing at 15 miles per hour or higher—unless dust can be controlled. Estadt said that Chicago’s average wind speed exceeds that level 40 percent of the time, hence the restriction would “effectively prevent us from operating.”

Estadt said that in the past year the company has spent $10 million on dust controls, including about 40 water cannons that automatically respond to wind direction in determining how to spray the petcoke piles. He said that the company took 69 soil samples in the surrounding area this fall, which “showed no unusual dust particles.”

A summary of the study notes that the samples in the neighborhood around the piles found the same soil composition as Chicago soil as a whole, based on federal and state surveys. And they did not find PAHs or “signature metals” of the type linked to petcoke and coal.

“It seems like our systems work,” Estadt said, drawing jeers from the crowd.

The fight over petcoke taps into a larger ongoing struggle on the far southeast side. This was once the thrumming hub of the region’s steel industry, with up to 40,000 people employed in well-paying union jobs. The mills closed in the 1980s and 1990s, other industries left as well, and the area fell into economic and structural decline.

The southeast side lost population, but the families who remained retain a fierce sense of pride in their home turf. The past few years have seen an increase in proposals for locating new heavy polluting industries or waste-related operations on the southeast side. Meanwhile a proposed upscale development on the old U.S. Steel Southworks site to the east has caused many residents to feel they are being saddled with undesirable operations while being passed over for desirable investment.

The prospect of becoming a massive petcoke dumping ground affiliated with a multi-billion-dollar company epitomizes their worst fears and suspicions.

“Once the petcoke comes there will just be even more garbage sent here,” said resident Richard McGraw, a retired accountant who would like to see solar farms and solar panel manufacturing on the brownfields of the southeast side. “Petcoke will speed the decline of the East Side—we’ll slide into oblivion.”

Rita Campbell thought the closing of the steel mills, where her husband worked, would provide clean air. But now even that silver lining is tarnished.

“You can have all the regulations in the world you want—something’s going to break down, someone’s going to make a mistake…and we are going to suffer for that,” said Campbell, who has lived in the area for four decades. “They need to go somewhere else where there isn’t housing and people living nearby.”

Camacho had the last word of the evening, urging people to join a nascent coalition of local groups and citywide environmental justice organizations bent on banning petcoke.

“Take a drive through my neighborhood—where I live, where I build friendships,” he told the city officials, noting that he used to play baseball and football just blocks from where the petcoke piles now stand. “We want to stay here—that’s why we want these petcoke piles gone.”

“The reality of it is we can’t count on Rahm Emanuel,” Camacho continued. “Put your faith in politicians, you’ll be there alone. All we have is each other—our community.”

Comments regarding Chicago’s proposed bulk storage regulations can be submitted through Jan. 24 at petcokecomments@cityofchicago.org or by mail to the Chicago Department of Public Health, Attn Environmental Permitting and Inspections, 333 S State St Room 200, Chicago IL 60604.