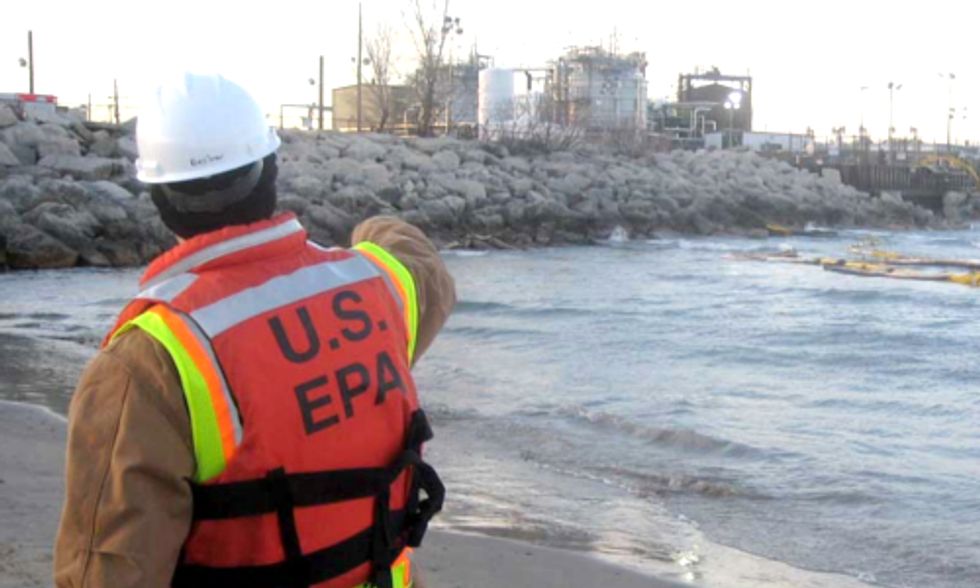 At just 20 miles away in Whiting, IN, the estimated eight-to-12-barrel spill could have impacted the water source of about 7 million people in Chicago and its suburbs. That's why a fiery Rahm Emanuel is demanding answers from BP and environmental agencies. He told reporters that he'd prefer a "full account."

"I want a report on what happened, how it happened, why did it happen, how much happened and how do you prevent it from ever happening again,” he said, according to the Chicago Sun-Times. “Chicago’s water was rated No. 1. I don’t want anything to ever endanger it. We’re investing in it. I want to make sure BP is a good corporate citizen next door in Indiana."

Crews have been cleaning a Lake Michigan oil spill this week from a BP refinery in Whiting, IN. Photo credit: U.S. Environmental Protection Agency

BP's initial assessment was that the spill could have totaled between 378 and 756 gallons of crude oil. BP crews used vacuum trucks to remove about 5,200 gallons of an oil-water mixture from the site near the BP refinery and the shoreline of a nearby beach. Still, the U.S. Environmental Protection Agency (EPA) says there are appear to be no negative effects on the lake.

The Lake Michigan spill took place a week after the EPA lifted its drilling ban on BP, which was related to the Deepwater Horizon oil and gas disaster in the Gulf of Mexico.

"The fact that literally days after BP was cleared to bid on federal oil and gas leases the company is cleaning up yet another spill—this one threatening the drinking water of 7 million people —sends a clear message," Valerie Love, a No Keystone XL Campaigner with the Center for Biological Diversity, said in a statement. "Not only can BP not be trusted to safely process crude oil, it’s obviously not capable of handling highly corrosive and toxic Alberta tar sands."

When the Chicago Sun-Times asked BP to respond to Emanuel's demands, an email response from a company spokesman did not address whether the company would issue the type of report the mayor requested.

“BP continues to make progress in responding to an incident Monday at the Whiting Refinery," the spokeswoman wrote. “Crews have recovered the vast majority of oil that had been visible on the surface of a cove-like area of Lake Michigan and on the shoreline between the refinery and a nearby steel mill.

"Monitoring continues in coordination with the U.S. Coast Guard, EPA and the Indiana Department of Environmental Management."